HE SAYS, SHE SAYS

Linturi: I was stripped naked in top hotel room

• Lawyer Muthomi Thiankolu said four men stormed into Linturi’s room, beat him up, stripped him naked and took nude pictures of him. They wanted Sh1 million.

• However, the woman claims the senator entered her room in the dark. She thought it was her husband. Claimed he touched her inappropriately. 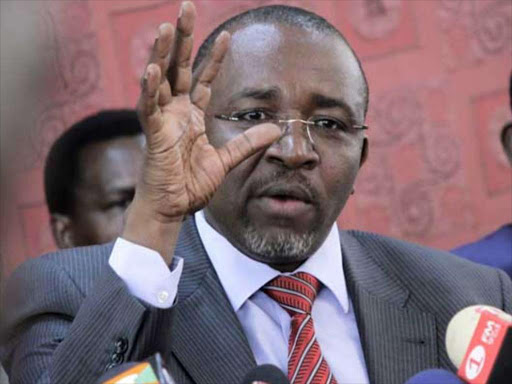 In the wee hours of January 29, Meru Senator Mithika Linturi was in deep sleep at a luxury resort in Nanyuki when five men violently stormed his room.

They kidnapped him, beat him up, stripped him naked and took nude pictures. They threatened to make them public.

You could be asking why?

According to Linturi, kidnappers falsely claimed that he had strayed into one of the men's villas in the dead of the night and snatched his wife.

This is part of Linturi's response to claims of entering into a couple’s hotel room when the husband was out and allegedly attempting to rape the wife.

However, in a letter by DCI George Kinoti, the woman reported to the investigators that she was with her husband and some friends at Maiyan Villas Resort Nanyuki on January 29 having fun at the hotel.

The woman claimed that later that night she retired to their room but she did not lock the door because her husband was still out.

At about 3 am she heard the door being opened and since the lights were switched off, she assumed it was her husband.

The man entered her bed and started touching her in a very unusual manner.

However, according to the woman, the man she thought was her husband never uttered a single word while he inappropriately touched her and later they both fell asleep.

“Thirty minutes later she heard a knock on the door and went to open the door, only to find her husband standing at the door. [This prompted] her to switch on the lights since she was confused who was in her bed whom she thought was her husband,” Kinoti’s letter reads.

On switching on the lights, they both realised there was a stranger in their bed and the husband became furious, raising the alarm.

Their friends who were with them in the hotel came to investigate and one of them identified the stranger as Linturi.

It was established the senator was also a guest in the resort and had a room adjacent to the couple’s room. It's not clear if the legislator confused his villa with that of the couple.

The woman alleged that Linturi offered to settle the matter amicably, offering them Sh200,000 in cash and a Sh800,000 cheque but later reported them for extorting him.

The couple decided to file their complaint of attempted rape and an indecent act with an adult against him.

Linturi could be charged if the DPP approves the charge sheet.

“The complainant was however dissatisfied with the action taken by the DCI Laikipia East who now turned them into suspects,” Kinoti said.

This new move by the DCI has promoted Linturi to move to court seeking to stop the police from arresting or charging him with attempted rape and an indecent act with an adult related to the incident.

Instead, the senator claims that he was the victim in the alleged rape incident and never went to the couple’s room as alleged.

In a letter written to the DPP by his lawyers dated June 11,  the senator alleged the woman’s husband was the one who barged into his room, accusing him of entering their room and sexually assaulting his wife.

The letter states that on January 29, Linturi checked into Maiyan Villas Resort Nanyuki with his girlfriend.

“Our client was calmly enjoying his sleep when some strangers violently stormed into his villa in the wee hours of the morning and kidnapped him,” the letter reads.

Lawyer Muthomi Thiankolu said four men stormed into Linturi’s room, beat him up, stripped him naked and took nude pictures of him.

According to the letter, the men further threatened to publish the photos online unless he gave them Sh1 million.

Thiankolu said the 'kidnappers' falsely claimed that his client had strayed into their villa and snatched one of their wives.

However, Linturi said that would be impossible because he was with his girlfriend in his room and there was no way he would go to any other room.

According to the letter, the intruders in his room told him the money they referred to as ‘kondoo’ was a penalty for Linturi’s action of entering into the couple’s room.

Thiankolu said Linturi pleaded with them that he didn't have any money but they insisted on money.

"The kidnappers took Sh200,000 cash and directed Linturi to call his friends and raise the Sh800,000 balance" the letter reads.

It is alleged that Linturi was scared, trapped and desperate so he made frantic calls to his friends to raise the cash but only managed to get Sh298,000.

They refused to take the money through M-Pesa so Linturi begged them to allow him to go to withdraw the Sh800,000 from the KCB Nanyuki branch.

The lawyer says the legislator was allowed on condition that he leaves his bag, writes a cheque and signs an undertaking that he owes them the money.

However, immediately after he left the hotel, Linturi did not go to the bank but proceeded to the police station and reported them for extortion.

The senator claims the OCS filled a P3 form for him to facilitate treatment of the injuries he sustained from the beating.

After treatment, he was given a police escort back to the hotel. He claims they found the kidnappers still waiting for the balance.

Thiankolu said police arrested the alleged kidnappers and managed to recover the Sh200,000 cash and Sh800,000 cheque that Linturi had given them.

Linturi was told the matter would be investigated and he was supposed to go back on February 5 but due to his busy schedule, he was not able to.

Thiankolu said a month later the senator was informed that the DCI headquarters had taken over the case from Nanyuki police station where he had initially made a report.

"Upon arrival, our client was dismayed to learn that the DCI headquarters had hatched a scheme in conspiracy with the kidnappers to make him the assailant and the kidnappers the victims," the lawyer said.

Thiankolu argued that the conduct by the DCI to recommend Linturi’s arrest and prosecution over the incident has caused his client anguish and reputational damage.

“The DCI has recently recommended the arrest and prosecution of our client for alleged sexual offences arising from the Maiyan Villa incident, before concluding investigations into our client's kidnapping and extortion complaint," he said.

Linturi wanted the DPP to direct the DCI to investigate his kidnapping and extortion claims and forward them to the prosecution office for review.

However, in a convoluted case of he says she says, the couple at the centre of the incident has maintained that the senator attempted to rape the wife.

To prevent defamation, you need correct reporting, not none at all
Sasa
9 months ago
What to do if you have been raped
by ANNETTE WAMBULWA Court Reporter
News
17 August 2021 - 06:20