Somalia maintains maritime row will be decided by ICJ

•This emerged on Sunday during Foreign Affairs CS Raychelle Omamo's maiden official visit to the country.

•She held bilateral talks on ways and mechanisms for strengthening bilateral relations and joint cooperation between the two states. 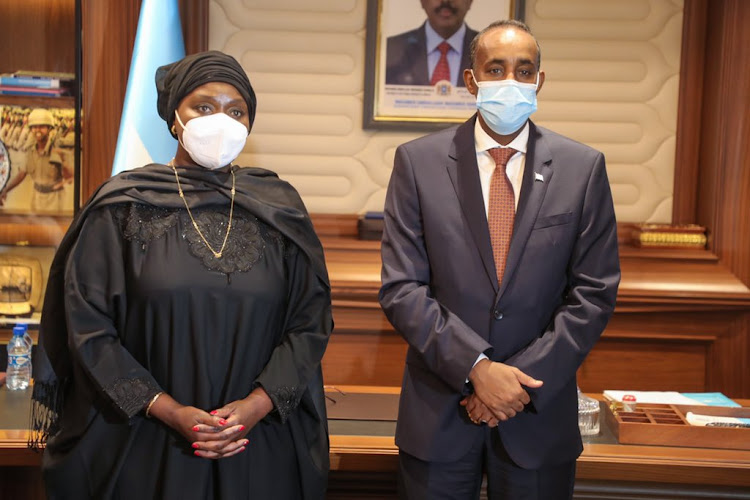 Somalia has maintained that the maritime dispute with Kenya will be decided by the International Court of Justice.

This emerged on Sunday during Foreign Affairs CS Raychelle Omamo's maiden official visit to the country.

In a statement after their bilateral meeting, Somalia PM Mohamed Roble said the Somalia government reaffirms that the decision on the maritime dispute is with the International Justice Court, and will wait for its verdict.

“The minister delivered an official invitation from Kenyan President Uhuru Kenyatta to PM Roble which he accepted. Somalia and Kenya have longstanding historical relations, including diplomacy, security and economics,” Moalimuu said in a statement.

“The people of our two nations are bound by many mutual interests and PM Roble is committed to further cement this relationship without compromising their fundamental sovereign matters.”

The relations between the two states have been frosty in recent years, with counter-accusations about interference with domestic affairs, territorial integrity over the Indian Ocean maritime dispute, miraa trade and security.

Sources from the Somalia Foreign ministry had on Saturday told the Star that the border issue would be top in the agenda in the visit.

“The agenda is the border dispute that is currently at the International Court of Justice. The Honourable minister (CS) will also meet our Foreign minister, the PM and the President,” the official said. 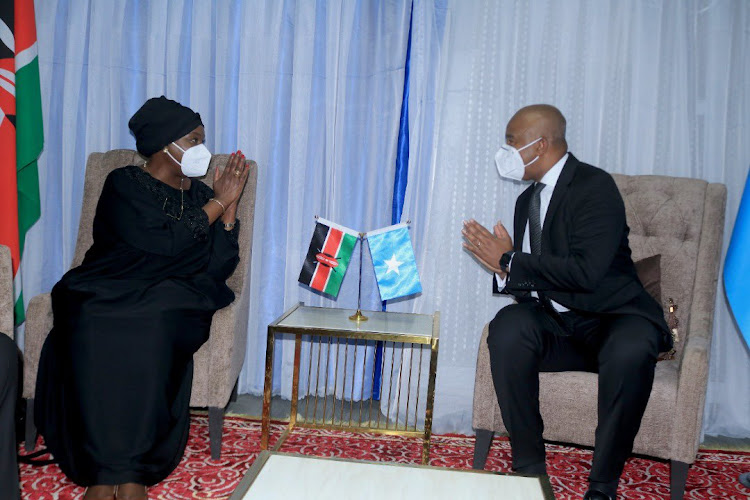 Kenya had on July 19, asked the AU Commission to offer technical assistance regarding border issues with Somalia through a note verbale to the continental commission.

“In this regard, the Commission wishes to communicate that it stands ready to provide technical assistance regarding border matters to all Africa Union Member States through its Africa Union Border Programme  upon a joint request.”

“To this effect, the Commission will initiate the process of further consultations between the two parties in the Kenya-Somalia border issues in line with the AU legal instruments,” the note verbale dated July 28 states.

Omamo was received at Aden Abdulle International Airport by her Somali counterpart Mohamed Abdirizak, whom she held bilateral talks on ways and mechanisms for strengthening relations and cooperation.

“ It’s indeed a revitalized beginning for us as we seek to foster our diplomatic and bilateral ties,” Abdirizak said.

A statement by the Somalia Ministry of Foreign Affairs said the two ministers “emphasized the importance of taking concrete measures to show respect for sovereignty, territorial integrity and political independence, which are the cornerstone of the relationship between the two countries.”

But even as CS Omamo arrived in Mogadishu, President Mohamed Farmaajo on Saturday barred government agencies from entering agreements with foreign countries, organisations and companies until after the election.

The decree bars any ministry or agency to enter an agreement about issues related to sovereignty, land and maritime borders. It was seen as undercutting PM Roble ahead of the meeting with Omamo and his scheduled visit to Kenya this month on invitation by President Kenyatta.

He is expected to negotiate a miraa trade deal.

A Somalia-based journalist on Sunday termed the development as “jostling for power between President Farmaajo and PM Roble...the president flexing his muscles.”

Kenya had asked the AU Commission to offer technical assistance regarding border issues with Somalia
News
3 months ago
by ELIUD KIBII Subeditor and writer
News
08 August 2021 - 20:00