• Somalia Foreign Affairs ministry officials confirmed to the Star that CS Omamo with be in Mogadishu on Sunday, which is her maiden trip to the country 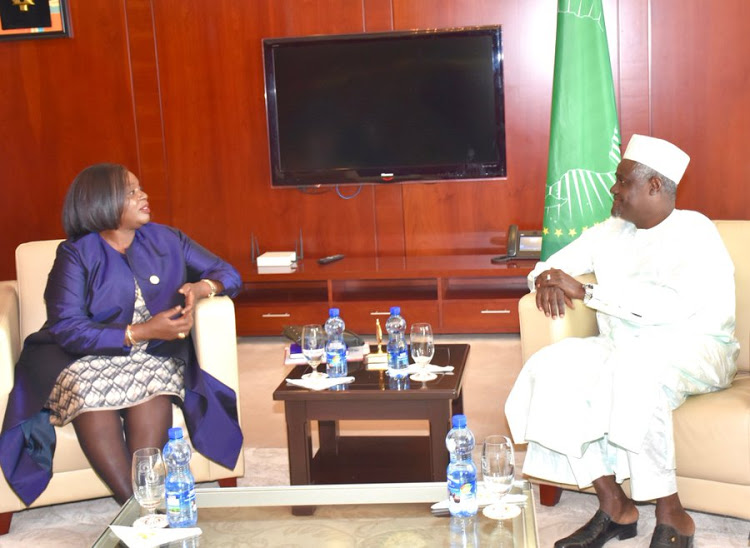 Somalia Foreign Affairs ministry officials confirmed to the Star that CS Omamo will be in Mogadishu on Sunday, which is her maiden trip to the country.

There she will meet her counterpart Mohamed Abdirizak, Prime Minister Hussein Roble, and later hold talks with President Mohamed Farmaajo.

“The agenda is the border dispute that is currently at the International Court of Justice. The Honourable minister [CS] will also meet our Foreign minister, the PM and His Excellency the President,” the official said.

Kenya had on July 19, 2021 asked the AU Commission to offer technical assistance regarding border issues with Somalia through a note verbale to the continental commission.

“In this regard, the Commission wishes to communicate that it stands ready to provide technical assistance regarding border matters to all Africa Union Member States through its Africa Union Border Programme (AUBP) upon a joint request.”

“To this effect, the Commission will initiate the process of further consultations between the two parties in the Kenya-Somalia border issues in line with the AU legal instruments,” the note verbale dated July 28 states.

Foreign Affairs PS Macharia Kamau did not respond to inquiries about the visit.

In August 2014, Somalia formally asked the ICJ "to determine, on the basis of international law, the complete course of the single maritime boundary dividing all the maritime areas appertaining to Somalia and to Kenya in the Indian Ocean”.

The matter is yet to be concluded following deferments and Kenya's withdrawal on March this year.

Kenya got alarmed when Somalia displayed contested oil and gas blocks within its territory for auction in London in 2019.

The fight for the ocean resources put Kenya’s interests at risk, with the Somali Parliament pushing for the withdrawal of the Kenya Defence Forces.

The decision was reached after considering Kenyan's application asking for postponement.
News
2 years ago

Foreign Affairs PS Macharia Kamau then said the auction happened on February 7, 2019 in London. Consequently, Kenya recalled its ambassador over the alleged auctioning of oil and gas blocks and expelled the Somalia envoy.

The two states resumed relations in May of that year after talks on the maritime row. Welcoming back the envoy, PS Kamau said he hoped “for even better days ahead.”

In May this year, Somalia restored diplomatic relations with Kenya after mediation by the Qatari Emir Sheikh Tamim Al Thani.

In a statement by the Ministry of Information, Somalia said it was resuming the relations “in keeping with the interests of good neighbourliness”.

Mogadishu severed ties with Nairobi again on December 15, 2020, over claims of interference with its domestic politics, which the Ministry of Foreign Affairs said were unfounded.

In June, Kenya lifted the ban on flights to and from the country after a month, “in the hope that full normalisation of bilateral relations will occur”.

The respective countries have since reopened their embassies in Mogadishu and Nairobi.

Somalia’s Foreign Ministry said the resumption of full diplomatic relations would be “a positive start to the commencement of bilateral discussions between the two nations”.

On June 21, President Uhuru Kenyatta maintained that his government will not cede even an inch of its soil to anyone or any state.

In what appeared to be a reference to the Kenya-Somalia border dispute, President Kenyatta said Kenya is ready to defend its territorial integrity as it has defended the peace of other states.

“As a peace-loving country, we are not the kind to be attacked or threatened or even allow an inch of our country to end up in the hands of other people. We are ready to defend ourselves just as we have defended peace in other states,” he said during a security tour in Boni area.