•Kieni MP Kanini Kega said the time had come for Raila to freely traverse the Mt Kenya region knowing that the vote-rich bloc is up for grabs. 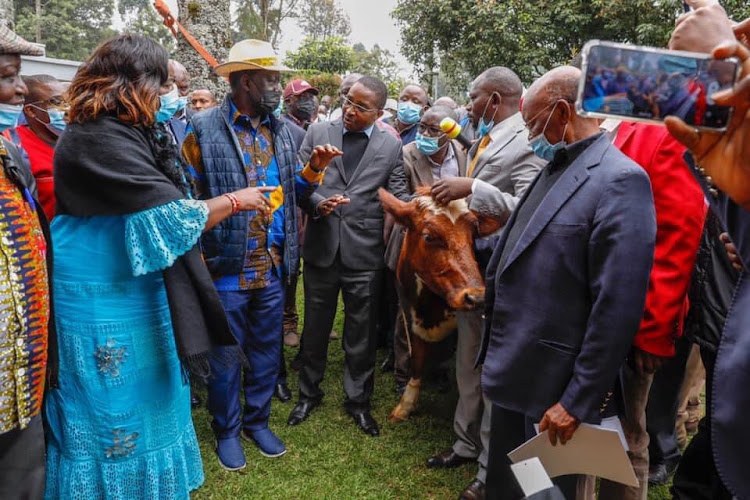 ODM leader Raila Odinga receives a cow from Central leaders during a tour of Murang'a on July 27.
Image: TWITTER/RAILA ODINGA

President Uhuru Kenyatta's allies from Mt Kenya will Friday hold talks to strategise on how to market ODM leader Raila Odinga in the region.

On Tuesday, key Uhuru confidants from Central Kenya promised to support the former Prime Minister in next year's general election, signalling a historic reunion of the Kikuyu-Luo communities.

Friday's meeting by the President's henchmen is seen as part of an elaborate plan to, for the first time, position Raila as the mountain's prime choice to succeed Uhuru.

On Thursday, nominated MP Maina Kamanda, a key Raila ally from Central Kenya, said they will hold a meeting to craft a strategy on how to shore up the ODM boss' support in the region.

“Our rivals have been traversing the region for four years and lied to our people that Raila is dangerous for the region, yet Baba has never done anything wrong. We want to counter that narrative,” Kamanda said

The former Starehe MP who is also a close Uhuru confidant said today's meeting will map out how the team will crisscross the mountain to tell the people the truth about Raila.

“Time has come for us to deal with negative propaganda that has been thrown around so that going into the future our people are not blindfolded,”  the lawmaker said.

Kamanda was among politicians from Central Kenya who on Tuesday declared that the region will back Raila in next year's general election and vowed to campaign for him.

The meeting which will bring together MPs and a section of politicians including influential MCAs from Central Kenya will also craft a messaging strategy for Raila.

The session will map out the whole of Mt Kenya region, identify key players to push in the pro-Raila campaign as well as set timelines for the campaigns to shore up support.

The Star has established that part of the messaging would be to project Raila as a genuine politician who has suffered from politics of ethnic mobilisation by rivals who have unfairly targeted him.

They also want the region to realise the role Raila has played in stabilising the country since the March 2018 handshake with President Uhuru and which has enabled businesses to thrive.

They also want to show the sacrifice made by Raila's father, Jaramogi Oginga Odinga, who stood firm against the colonialists' push for him to swiftly form a government while Uhuru's father Jomo Kenyatta was still in detention.

This would later trigger long-standing ethnic prejudices between the Kikuyu and Luo communities.

Kieni MP Kanini Kega said the time had come for Raila to freely traverse the Mt Kenya region knowing that the vote-rich bloc is up for grabs.

The MP said the region accepts the sacrifices Raila and his father have previously made for the Kikuyu community including the 2002 Tosha declaration that sent Mwai Kibaki to power.

“As the Kikuyu, we remember that in 2002 Raila walked to Uhuru Park and said Kibaki Tosha and he became president. Before independence, Jaramogi stepped aside for Jomo Kenyatta,” Kega said.

The President's men are racing against time to steady the ruling Jubilee party in readiness for a coalition with ODM ahead of next year's polls as part of the plan to enhance Raila's 2022 chances.

Officials say leaders from the region should negotiate with ODM leader if they care about its future well-being.
Counties
1 year ago