DCI denied ever arresting the two judges, saying they were only told to record statements.

• in an inventory filed in court last week by lawyer Danstan Omari that was signed by all the officers present, nothing was recovered from Justice Muchelule's chambers. 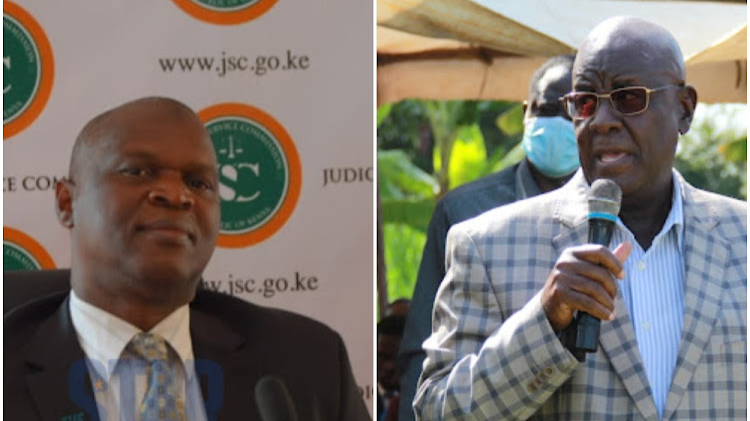 The DCI now claims officers found $57,000 (Sh6.1 million) in the chambers of one of the two judges who were arrested last week.

In an affidavit filed in court, DCI, through Chief Inspector Felix Banzi, said they recovered $50,000 from an unidentified woman in Justice Aggrey Muchelule's chambers and a further $7,000 from Justice Said Chitembwe.

However, in an inventory filed in court last week by lawyer Danstan Omari that was signed by all the officers present, nothing was recovered from Justice Muchelule's chambers.

In the case, KMJA successfully obtained orders last Friday barring the police from arresting the two judges pending hearing and determination of their case.

In their response, the DCI has denied ever arresting the two judges, saying they were only requested to accompany the police to DCI headquarters for purposes of recording statements to assist in investigations.

Lawyer argues Judiciary's independence is under threat.
News
1 year ago

Banzi says they received a complaint that some brokers had approached select judges with a view of procuring favourable judgements.

"On July 21 at around 3pm I was told by one of the complainants that after a series of meetings between certain judges and brokers a figure of Sh7 million was arrived at and the bribe was to be delivered to the residence of a judge at 7pm," Banzi said.

However, Banzi says the venue was abruptly changed and rescheduled to the next day at 7.45am in one if the chambers at Milimani law courts.

He says due to the short notice, they couldn't obtain a search warrant.

Banzi told the court that they arrived at Milimani law courts at 7.30am and waited for the exchange.

"We waited around the relevant meeting area from our time of arrival until 2pm when information was received that the exchange was about to take place but at chamber 230 which belongs to Justice Muchelule, " the affidavit reads.

I didn't order arrest of Judges Muchelule and Chitembwe - DPP

The two judges were accused of receiving bribes for various cases they previously handled.
News
1 year ago

Banzi claims that the meeting was being facilitated by Justice Chitembwe.

So they proceeded to the chamber and upon search they recovered the money.

They have asked the court to dismiss the case filed by KMJA last week arguing that they never harassed or arrested the judges as alleged.

Banzi says there is no affidavit sworn by either of the two judges who are interested parties in the case.

"At no point were the judges arrested as alleged by KMJA, they were only  recorded statements to assist with investigations," Banzi said.

The two judges and other persons of interest within the chambers were requested to accompany the officers to their offices for interviews.

According to the affidavit, the judges were voluntary cooperative the interviews were expeditious and they were left to continue with their duties.