Government orders illegal herders out of Laikipia in seven days

• Matiang’i warned the herders that a crackdown will follow the lapse of the ultimatum and urged them to leave within the window.

• Matiang’i also announced an immediate takeover by security teams of the 80,000- acre Kilmon farm that is owned by the government. 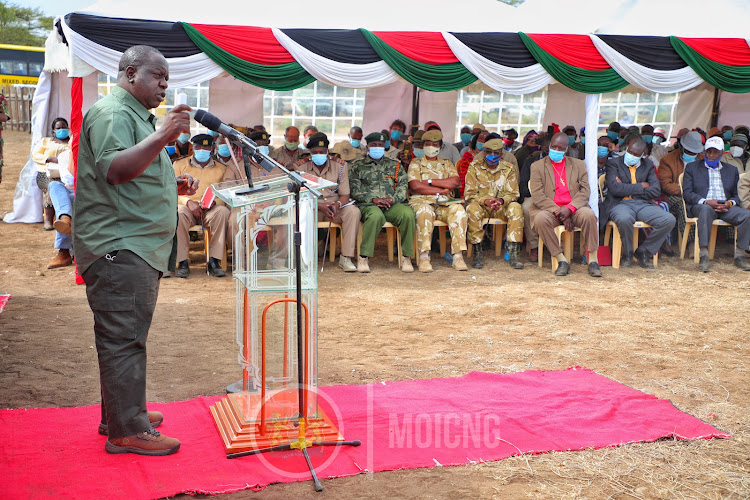 The Government has given herders who have invaded private farms in Laikipia seven days to move out of the county or face forceful evictions.

Interior Cabinet Secretary Fred Matiang’i warned the herders that a crackdown will follow the lapse of the ultimatum and urged them to leave within the window.

Speaking at the Anti-Stock Theft Unit (ASTU) camp in Naibor in Laikipia County, Matiang'i blamed the encroaching herders for violent clashes with local farmers and owners of private ranches and conservancies.

“We are preparing a serious crackdown. It’ll be ruthless and merciless, and I plead will all illegal herders to move out within the period,” the CS said, adding the Government would not hesitate to use force, if necessary, with a view to protecting the lives and private property bearing the brunt of invasions.

The CS was accompanied by the Inspector General of Police Hilary Mutyambai, senior security officers and local leaders led by Governor Ndiritu Muriithi.

Matiang’i also announced an immediate takeover by security teams of the 80,000- acre Kilmon farm that is owned by the government and that has been a theatre of deadly clashes between armed herders from Laikipia and the neighbouring counties.

A GSU camp will be established at the parcel to create a buffer zone between the two warring sides.

The CS further ordered private ranchers and pastoralists to register agreements on access to pastures with the county government beginning next month to enable the government to enforce the pacts and arbitrate bloody disputes around their implementation.

“If you have an agreement with ranchers, that’s OK. But for the government to be able to provide security, we want such agreements recorded and the terms registered with the County Government to help resolve disputes around them,” he said.

To help pastoralists in the county ease the pressure on grazing pastures and water points, Matiang'i further announced that the Kenya Meat Commission (KMC), which is under the Kenya Defence Forces (KDF), will begin buying around 1,000 livestock weekly from next week in an off-take deal brokered by the Government.

The program will complement a similar one being implemented by the Laikipia County Government.

The CS and Muriithi urged pastoralists to take advantage of the offer to reduce their losses due to drought and improve the productivity of their livestock.

Matiang’i also put on notice local politicians whom he accused of fanning violent clashes by sponsoring relocation and forceful displacement of residents to rearrange voter distribution in the area ahead of the 2022 general elections.

He said the government will begin recruiting chiefs and assistant chiefs for new administrative units in the area, a move that will not only help contain the sponsored evictions but also decentralize security services.

“We must put an end to this balkanization. We will not allow wananchi to be hurt due to political positions. We will immediately arrest those encouraging election rearrangements through forced movements,” he said.

Leaders present blamed insecurity for the decline in tourism and the closure of hotels and lodges in the area, which have led to loss of jobs and revenue for the county.

Laikipia North MP Sarah Korere regretted that the latest flare-ups of violence had forced the closure of at least one public school in the area.

Operation launched in Laikipia to flush out illegal herders, bandits