• Michelle's mother Hilda Achieng’ escaped arrest after she disappeared into the crowd upon seeing the police.

• “It is impossible to move past my daughter’s death with so many questions begging. The police don’t get that,” she told the Star. 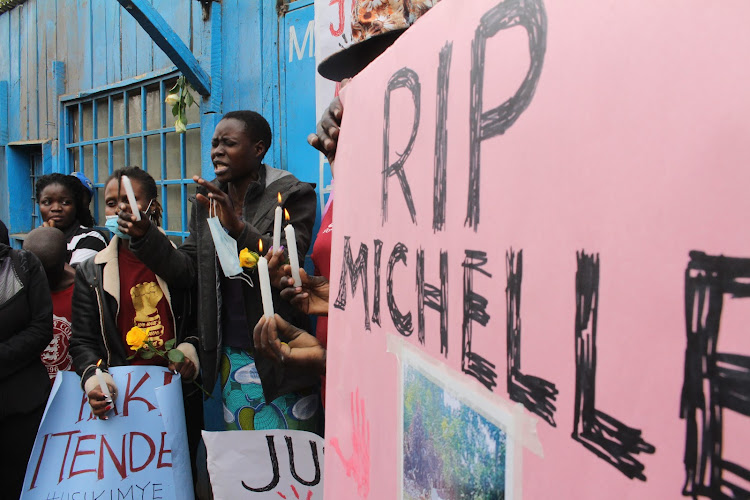 Hilda Achieng, mother of Jennifer Michelle joins activists protesting against the death of her daughter at a school in Kayole on July 27.
Image: ANDREW KASUKU

Police on Tuesday arrested activists during demonstrations to demand justice for a child who died under unclear circumstances at a school in Kayole.

The activists say Jennifer Mitchelle, an eight-year-old Grade 2 pupil, was beaten by a teacher for answering a question wrong. The school denies wrongdoing.

Instead, it says the child fell down as she was called to take an assignment on the blackboard. She was taken to hospital where she died.

The officers arrived shortly after the activists lit candles outside the school and bundled them inside their vehicle.

Michelle's mother, Hilda Achieng’, escaped arrest after she disappeared into the crowd upon seeing the police.

“It is impossible to move past my daughter’s death with so many questions begging. The police don’t get that,” she told the Star. 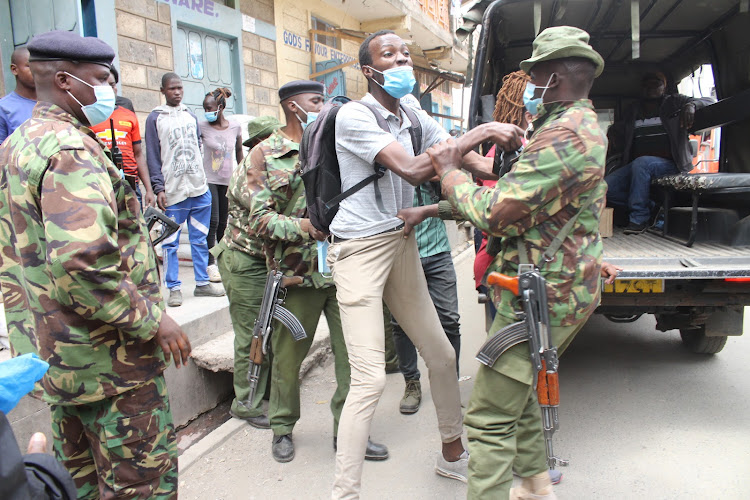 Police arrest an man as they break a protest march by activists seeking justice for Jennifer Michelle in Kayole on July 27.
Image: /ANDREW KASUKU

Mitchelle’s body was found at Mama Lucy Hospital after an agonising search by the parents on May 19, 2021.

Achieng’ said she had prepared her for school as was the norm and accompanied her there. They stay a few metres from the school.

“She was in good health, and jovial when I left her at the school gate where the pupils were being checked for mask and their temperature before they were allowed in,” she said.

Achieng’ said her daughter waved at her as she walked away, not knowing that would be the last time she saw her alive.

“I waited for her to come back at 5pm together with the other Grade 2 pupils but she did not. At around 5.30pm, I asked her schoolmates but no one had seen her,” she said.

By then, her younger son who attended the school had returned. Achieng' said she walked to the school only to find it locked.

When the family realised the child was not back by nightfall, they filled a missing person's report at a nearby police post.

A few minutes past 9pm the same night, a police officer rang Achieng’ asking if she had found her daughter.

“He told me that there was a girl who fit my daughter’s description at the Mama Lucy Hospital and asked that I go check. He cautioned me not to go alone,” Achieng’ said.

Achieng' said the officer told her she would meet two policemen at the hospital gate who would accompany her inside.

“She was in the morgue, long dead. The hospital said she had been brought there by unknown people,” she said.

The mother said an autopsy conducted a week later by a government pathologist said Mitchelle died due to heart failure.

“She also had a blood clot at the back of the head, which the pathologist determined could have been caused by a fall,” she said.

What remains unclear is how the child got to Mama Lucy hospital, the circumstances under which she was taken there and why her parents were not informed.

“She, however, could not tell me why they failed to inform us of the incident, what time she was taken there and by whom,” he said.

The school management turned the Star reporters away at the gate as they sought comment on the matter.

An officer at the Kayole police station said investigations were still ongoing.

Activist Njeri Wa Migwi, who was among those who were arrested, said they had informed the police of their plan to hold the demo.

“We have been candidly told if we dare proceed with the march, we will be tear gassed and arrested, and that we should go and peruse the file that they're carrying investigations,” she said.