• The vocal MP has said before that Uhuru is punishing him for supporting Deputy President William Ruto.

• “My support for William Ruto remains steadfast and unshaken. The Darkest hour is just before Dawn,” Rigathi said. 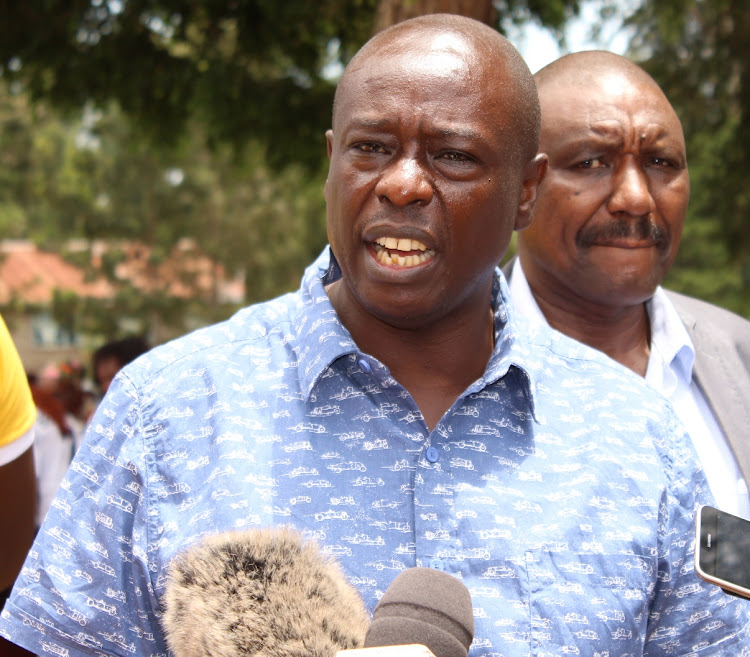 Mathira MP Rigathi Gachagua spent five years as Uhuru Kenyatta's personal assistant in the early 2000s but is now one of the President's fiercest critics.

On Friday, after nearly two years of tussles with the Directorate of Criminal Investigations, the sharp-tongued MP was arrested at his Nyeri home.

“I am happy it is finally over,” the MP tweeted soon after he was taken in.

Rigathi worked for Uhuru during the last years of the Kanu regime. Uhuru was a Cabinet minister and later Opposition leader from 2001 to 2006.

On Friday, he criticised the government for his arrest and said time was running out for the current administration.

“To our tormentors and persecutors, you only have one year remaining. We shall have a new democratic Government that does not use the criminal justice system to manage politics,” Rigathi wrote on Facebook.

The vocal MP has said before that Uhuru is punishing him for supporting Deputy President William Ruto.

“My support for William Ruto remains steadfast and unshaken. The Darkest hour is just before Dawn,” Rigathi said.

The first-term MP has built his national profile as an outspoken, even confrontational figure. He insists that the graft allegations against him are a witch-hunt.

The University of Nairobi political science graduate had dared DCI boss George Kinoti to arrest him if he had evidence on corruption allegations.

The DCI had said about 40 companies associated with the MP and those of his proxies had overseen a web of questionable transfers and transactions.

“We have completed that investigation and it has taken us a lot of time,” Kinoti, said then.

Rigathi said Friday that at least two dozen DCI officers raided his home and arrested him to face 'trumped-up charges' of money laundering.

“It has been two years of hell; being arrested and released, writing countless statements, being prosecuted in the media, intimidation and harassment to me and family,” Gachagua said.

The MP first tasted power when he was appointed the assistant secretary in the Ministry of Home Affairs and National Heritage.

He had earlier undergone paramilitary training at the Administration Police Institute that prepared him for a career in the government.

He left the ministry in 1990 after he was recruited as a Cadet District Officer and transferred to the office of the Head of Civil Service where he worked as a personal assistant.

In 1995, he was named the district officer in charge of Kakamega before moving to Ngarua within Laikipia in 1997.

After spending 10 years in public service, he quit and ventured into business, registering his first firm Ridor Group of Companies.

In 2001, President Kenyatta, who was then the Minister for Local Government, hired Rigathi to support his work in the office.

The MP was Uhuru's PA during the 2002 General Election which the President lost despite being handpicked as heir by President Daniel Moi.

In 2006, Rigathi moved to work with his elder brother the late Nderitu Gachagua. Nderitu was then Mathira MP and was elected first Nyeri governor in 2013.

Rigathi said in a past interview that they fell out with Uhuru when he asked the President to help process payment for a campaigner who had supplied the government.

"When he was a minister at Jogoo House, there was one campaigner who kept asking for money, and he (the campaigner) requested me to ask Uhuru to make some calls so he could be paid for a job he had done for the government,” he said in a past interview.

The man told Rigathi that if he got the cash he would be able to campaign without coming to Uhuru for money. The MP thought that was a good idea.

“When I proposed it to my boss, he chased me out of his office like an offensive dog,” Rigathi said.

The MP came into prominence after his brother's death as he took up the political leadership of the family.

He won the Mathira MP seat on Jubilee Party ticket in 2017.

Ruling on Gachagua plea to question investigator set for June

In the case, Assets recovery wants the MP to forfeit over Sh200 million suspected to be proceeds of crime
News
1 year ago

The legislator says the allegations are politically sponsored.
News
1 year ago
Post a comment
WATCH: The latest videos from the Star
by JAMES MBAKA Deputy Political Editor
News
23 July 2021 - 14:13
Read The E-Paper