Raila moves to revitalise his 2022 machine 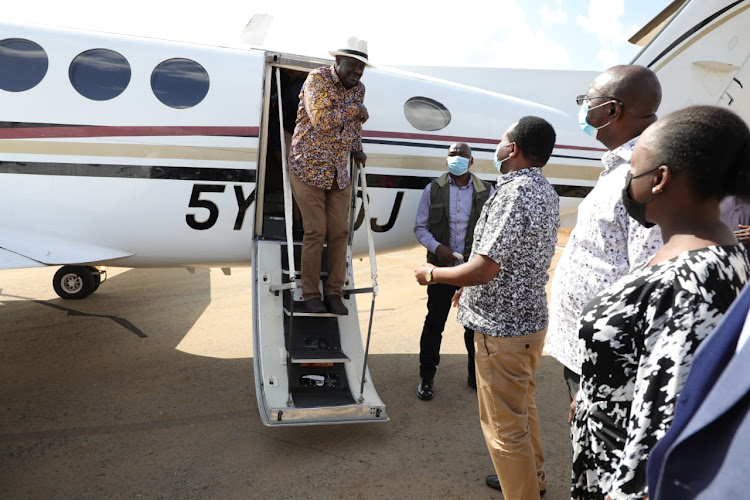 COAST VISIT: Raila Odinga is received by Taita Taveta Governor Granton Samboja at Ikanga airstrip in Voi on Monday. Odinga is on a five-day charm offensive at the Coast.
Image: SOLOMON MUINGI

In what is seen as a do-or-die contest against Deputy President William Ruto, Raila’s plan is to confine Ruto to his Rift Valley backyard as they scramble for the Mt Kenya vote bloc.

For the first time, the former prime minister is facing the 2022 elections with a friendly system and most likely the backing of President Uhuru Kenyatta.

Over the past few weeks, Raila has held several strategy meetings with top political leaders. He has met key opinion leaders at the grassroots and unleashed his own transformation agenda to counter Ruto’s economic model.

Raila has been in the Coast since Monday, visiting Tana River, Kilifi and Mombasa to thwart Ruto’s forays.

On Monday, he hosted Mt Kenya leaders, including National Assembly Majority Leader Amos Kimunya for a breakfast meeting in Mombasa.

Part of his plan is to conquer Central Kenya, a region that has perennially voted against him and is seen as gravitating towards Ruto.

The meeting appeared to have the blessing of President Kenyatta who has also been in Mombasa since Tuesday.

The MPs later attended the annual Eid Baraza with Raila where they took swings at Ruto, insisting Central remains with Uhuru.

“Do not be worried about Central,” Kimunya assured, dismissing any UDA inroads.

On Tuesday, Raila also met Kitui Governor Charity Ngilu in what sources say is a move to bring all the three Ukambani governors onside.

Ngilu, one of the biggest crusaders for the unity of Nasa chiefs, was to hold talks with Uhuru.

Raila is courting all the three Ukambani governors — Ngilu, Kivutha Kibwana (Makueni) and Alfred Mutua (Machakos) — especially if Wiper leader Kalonzo Musyoka insists on going all the way to the ballot.

On Monday, Raila also met Kakamega Governor Wycliffe Oparanya at Mombasa Governor Hassan Joho's home in Nyali. The two men initially said they would challenge him for the ODM ticket.

Raila is also setting up a campaign secretariat.

“Our plan is to confine him [Ruto] to the Rift Valley. We are going for Western, Nyanza, Coast, North Eastern and Nairobi. Kalonzo and the Ukambani governors should deliver Lower Eastern,” an insider told the Star.

Central would then be the battleground.

Since Saturday, there has been a fierce debate on social media called “made in Kenya challenge” following Raila propositions to get back Kenya’s own products on supermarket shelves.

Raila and his team say Ruto has been sloganeering with his bottom-up economic model without giving tangible economic proposals.

“I have some ideas on how we can have many made in Kenya products on supermarket shelves and shops in a sustained manner that ensures home grown industrialisation,” Raila stated.

He has since begun tailoring the transformation strategy to specific regions.

On Wednesday, he narrowed down on to Kwale county, saying coconuts can be harnessed on an industrial scale to produce coconut milk.

“Coconut husks produce fine ropes. Coconut tree leaves produce fine brooms. But there are no brooms and ropes bearing 'Made in Kenya' labels.

Last month, he was in Dubai in what sources linked to cash-raising plans to build a formidable financial war chest.

His Coast forays have seen him manage the once-growing clamour for a regional party.

There are also indications Joho and Oparanya have agreed to drop their bids and rally behind Raila next year.

On Wednesday Raila ally John Mbadi told Star that the party leader has started marketing the party and his agenda in readiness for 2022.

The ODM national chairman said the country should prepare for similar regional meetings. He said as it's one year to election day, the party is going flat out to reconnect with its bases.

“Raila is in regional meetings to discuss strengthening ODM and the agenda of ODM going forward and his agenda for the country,” Mbadi said.

“We are going to a season of elections; this is the time people are starting to engage. Deputy President Ruto has just been disruptive from the time we had last elections and we told him to hold on until a year to elections. Our party is readying itself for elections.

“If there were no corona, you will be seeing more of intense political activities.”

ODM secretary general Edwin Sifuna said the party started its 2022 preparations in January and has only been held back by the pandemic.

“We started 2022 campaigns at the beginning of the year when we launched activities to prepare for 2022. We were looking for a presidential candidate and started the grassroots members registration. We are now fully in the election cycle," Sifuna said.

Mbadi said Raila has been releasing points on his economic blueprint as part of his broader agenda to turn around the country’s economy, if elected.

“We have started discussion on what we want to do for the country going forward, we are already there,” Sifuna added.

Last week, Raila unveiled his agenda to unlock to rural economies and to ensure a fully industrialised Kenya.

The approach is not only seen as Raila’s grand plan to win over voters but is also viewed as deliberate move to counter Ruto’s hustler narrative.

“Going forward, investment in skills and rural transformation for local industralisation is a must,” Raila said.

“Friends and political foes have challenged me to explain my position that we can have Made in Kenya products if we focused on transforming rural areas and developing skills,” he said.

“I have accepted that challenge, and I will highlight skills and products that, with just a little support, would lead to purely homegrown Made in Kenya  products right from rural Kenya.”

Picking Kwale county, Raila demonstrated a policy shift that will develop locally available resources and skills into a thriving enterprise that will spur the region's economy.

“Generations of the Digo and Duruma and all the other communities in Msambweni, Matuga and Lunga Lunga constituencies in Kwale have grown with coconut.

“With just a little input on sharpening the traditional skills, we would have a locally owned coconut-based factory producing oil and TUI (coconut milk) bearing the label Made in Kenya or Produce of Kwale fairly cheaply.”

He blamed lack of robust policy on local resources that he said has contributed to death of most  local industries.

For instance, he said, most of the coconut milk flooding the country’s supermarkets originates from Thailand while neighboring Tanzanians continue to buy Kwale’s coconuts at throwaway prices of Sh6 to Sh10.

“The people of Kwale and entire Coast lost an opportunity to make industries out of coconut because we failed to support local skills and rural industries,” he said.

“The story of Kwale is the story of every part of Kenya. Every part of this country has a product that with just a little investment in local skills and rural infrastructure could be turned into an industry employing locals and producing Made in Kenya products.”