Also quizzed were their drivers and clerks.

• Muchelule was picked from his office in the city and taken to the Directorate of Criminal Investigation headquarters for questioning. 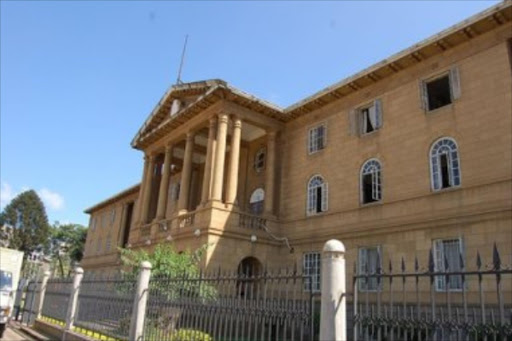 High Court judges Aggrey Muchelule and Juma Chitembwe were on Thursday questioned for hours by the police over issues touching on their work.

Also quizzed were their drivers and clerks. They were later set free at about 5pm and told they would be summoned again.

Muchelule was picked from his office in the city and taken to the Directorate of Criminal Investigation headquarters for questioning.

This was after police visited his office. The judge said police went to his office and searched but did not find anything unusual.

“They came and searched, but nothing was found. I don’t know what they want,” the judge said on the phone.

"So, the question is that an attempt was made to get judges outside their offices so that money can be planted in Justice Muchelule's office. Thank God, Justice Muchelule never moved out of his office," lawyer Danstan Omari said.

"There was a conviction that money has been planted into the office of judge Muchelule. They did a search, there was no money," Omari added.

He accused the state of using criminal procedures to silence Muchelule. The lawyer noted that Muchelule was among the judges whose names had been forwarded to President Uhuru Kenyatta for appointment to the Court of Appeal.

Muchelule and five others were left out when Uhuru gazetted 34 new judges.

Speaking separately to the Star, police said they were acting on a complaint, but did not give details on the nature of the complaint.

The officers were armed with a search warrant issued by a magistrate’s court, one officer said.

A police officer aware of the developments said no one had been arrested and that they were "just clarifying things”.

“No arrest has been made so far, but he is here. Maybe we are taking tea here now,” the officer said.

DCI George Kinoti did not respond to our calls.

Reports said judge Chitembwe was questioned over a land matter his court has handled.

He was also picked from his office in the city by police.

They were questioned separately by officers led by the head of Serious Crime Unit Obadiah Kuria. Kuria did not respond to our queries over the issue.

The Judiciary has been at loggerheads with Uhuru after he declined to confirm the six of the judges who had been approved by their employer, the Judicial Service Commission, for promotion to the Court of Appeal.

A list of 40 judges was forwarded to the President for appointment in 2019 during the tenure of former Chief Justice David Maraga.

In mid-2020, Maraga tried to push the President to appoint the judges but he did not receive any response from Uhuru.

Those left out included High Court judges Joel Ngugi, George Odunga, Muchelule and Weldon Korir. They were earmarked for promotion to the Court of Appeal.

Uhuru's move sparked bitter reactions, with Chief Justice Martha Koome and her predecessors David Maraga and Willy Mutunga taking on the President for violating the Constitution and attempting to control the Judiciary.