Distribution of textbooks and training of teachers has been done

• The class will accommodate children aged 9 or 10 and are expected to take 12 compulsory subjects.

• Learners will at the end of Grade Five take an assessment that will contribute 20 percent of their final mark. 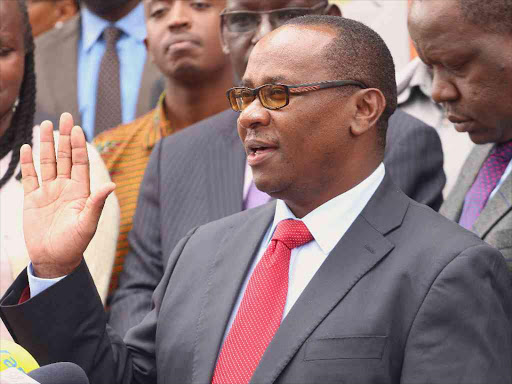 The pioneer class studying under the Competency-based Curriculum transitions to Grade 5 when schools reopen next week.

The pupils, back from a three-month holiday, will have two years to complete primary education.

Kenya Institute of Curriculum Development chief executive Charles Ong'ondo on Wednesday told the Star preparations to ensure a smooth transition are in place.

"The distribution of textbooks and training of teachers has been done and we are ready for the roll-out," Ong'ondo told the Star.

The class will accommodate children aged nine or 10 and are expected to take 12 compulsory subjects.

The distribution has not been completed in Wajir, Mandera, Turkana, Garissa, and Lamu counties as they are prone to insecurity.

Njagi says, the distribution in these counties is at 70 per cent but will be completed by the end of this week ahead of school reopening next week.

“All textbooks have been distributed to respective schools for the readiness of the roll-out,” Njagi told the Star.

However, Njagi reveals that the pioneer class will miss out on foreign and indigenous languages. French, Arabic, and Mandarin have been put on hold because they are optional subjects.

Interviews with teachers further point to a challenge in the implementation of new subjects areas of Agriculture, Art and Craft, Music, and Physical and Health Education as they are mainly practical-based.

The government has not done much to provide the tools or materials required for the practical activities, a teacher who requested not to be named for fear of retribution said.

In turn, she said, proper delivery in these subjects has not been achieved in the earlier grades and there are fears it could impact the learning outcomes.

Njagi said the complaints lack basis as the government provides textbooks in all subjects.

"The government purchases textbooks and teacher guides in all subjects including those in question," Njagi told the Star.

The 2021 calendar will span only eight months between July and March next year or an equivalent of 30 weeks.

Term 1 will begin on July 26, learners will have a week's break from October 2 to October 10. The second term will run until December 23.

In term three, the learners will take a critical assessment that will contribute 20 per cent of their final mark.

It will also partly determine where they will proceed to secondary school.

The assessment is part of the reforms and aims to take the burden off the final KCPE examination that determined transition to secondary school.

Secondly, the roll-out will shape the learners in readiness of exiting primary school at the end of Grade 6 in 2022.

The Teachers Service Commission and the curriculum developer in March jointly conducted training for teachers to handle the CBC curriculum in Grade 5. Over 91, 000 teachers participated.

Last week, the TSC also conducted training for those handling learners with special needs under the new curriculum.