Raila met the leaders in Mombasa on Wednesday.

•The meeting comes even as he continues his tour of the coast region which started on Monday. 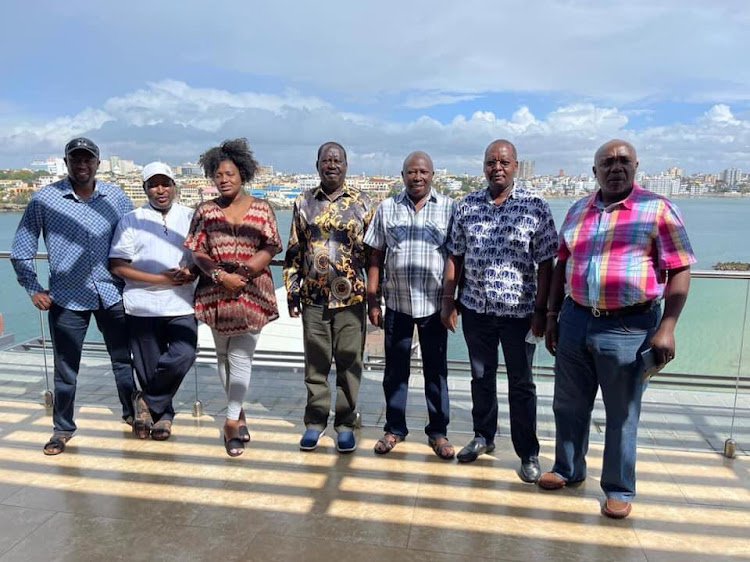 The meeting comes even as he continues his tour of the coast region which started on Monday.

"Begun the day with a working breakfast meeting in Mombasa with Central Kenya MPs," Raila tweeted on Wednesday.

On his handle, Kimunya said they discussed matters of mutual national interests.

"Held a consultative meeting with former PM Rt Hon @RailaOdinga and other Mt Kenya leaders on issues of mutual and national interest. @Rachelshebesh," he said.

The meet up comes even as the Jubilee Party resolved to freeze coalition talks with ODM for five months to focus on its own revamp.

The move is expected to enable the ruling party strengthen its structures, seal internal cracks and shore up public appeal to enhance its bargaining power in the proposed deal.

Move will enable it to strengthen party, seal cracks and shore up public appeal
News
1 week ago

Raila started his tour of the Coast region as DP William Ruto concluded his.

The ODM leader has been on frequent tours of the Coast region and this makes it his fourth visit in two months.

Ruto’s two-day tour at the Coast began in Kilifi on Saturday at the burial of Bishop George Mwangome Chipa, whom he described as a true faith leader whose sermons were authentic, targeted, rich and thought-provoking.

He then proceeded to Mombasa in Nyali where he engaged and supported more than 500 Kongowea and Mackinnon markets traders whose businesses were destroyed by a fire recently.

Raila and Ruto are out to ensure they have control of the region ahead of the 2022 general elections.

Ruto was in Kwale for a fundraise for Muslim clerics while Raila the burial of one an ODM grassroots leader.
Counties
2 weeks ago
by BRIAN ORUTA Digital Journalist
News
21 July 2021 - 14:16