Series of meetings lined up next week to break the marriage vows, ditch the rings 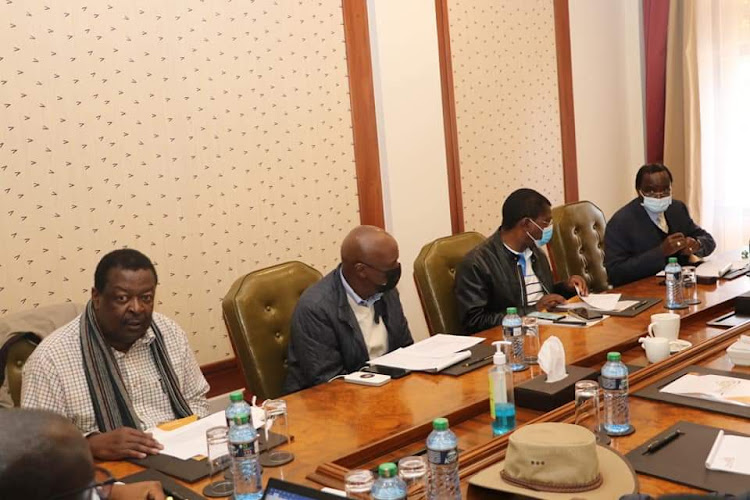 The One Kenya Alliance principals have unveiled a road map leading to their eventual exit from Nasa, setting the stage for a possible 2022 Third Force.

The Star has established that Musalia Mudavadi (ANC), Kalonzo Musyoka (Wiper) and Moses Wetang'ula of Ford Kenya have planned key meetings in the coming days to seal the divorce.

On Friday, there will be a joint parliamentary group meeting of the MPs and senators allied to the three parties to discuss the political divorce.

The meeting will apprise the lawmakers of the next steps to achieve permanent separation from Nasa after the principals agreed on Tuesday to pull out of the moribund Nasa coalition.

The parties will next week convene separate National Executive Council meetings to break the Nasa wedding rings, repudiate their vows, and formally ratify the instruments for exit from the coalition.

It is understood the NEC meetings will sanction the secretaries general to write to the Registrar of Political Parties to officially withdraw from Nasa.

Kakamega Senator Cleophas Malala, a key Musalia ally and a member of the Oka technical committee, confirmed the principals on Tuesday had resolved to ditch Nasa.

“That was a resolution of yesterday’s (Tuesday's) meeting. So we are hoping that as we start next week, the resolutions would have been implemented,” Malala said.

The process will then culminate in a joint NEC meeting of the three parties and Gideon Moi's Kanu to approve formalisation of the Oka union ahead of the 2022 polls.

During the period, Kanu has also committed to severing its post-election coalition agreement with President Uhuru Kenyatta's Jubilee Party.

Kiminini MP Chris Wamalwa told the Star a resolution has already been made by the Oka principals to initiate the termination of the Nasa marriage.

“The meeting on Friday will seek the endorsement of the parliamentary groups to formally divorce Nasa,” Wamalwa said, insisting that there was no turning back.

The MP said by the end of July, the parties will have written to the Registrar of Political parties to pull out of Nasa. Wamalwa is a member of the Oka technical committee, the think tank crafting the coalition instruments.

“What is being done is what has been sanctioned by the Oka principals, it is largely complying with the law,” he said.

Should the Oka principals eventually pull out of Nasa—the political machine that was assembled in 2017 and that nearly vanquished Uhuru's reelection bid—then they would usher in a third political force.

It is unlikely that ODM boss Raila Odinga, one of the Nasa principals, would abandon his political plans with Uhuru's Jubilee Party to reunite with his estranged allies given the high stakes in next year's polls.

Any ODM-Jubilee merger plans have been suspended for three or four months so Jubilee can put its house in order.

The Nasa coalition agreement signed in 2017 stipulates Nasa can only be wound up if at least three of the four parties write to the Registrar of Political Parties seeking to formally withdraw.

“We will have to exit Nasa because we are going into the 2022 elections as Oka,” National Assembly Deputy Minority leader Robert Mbui said.

The Wiper MP revealed the Oka principals have agreed as a matter of principle that they will field one of their own to face off with Raila and Deputy President William Ruto.

“There is no way we are going into the 2022 General Election under Nasa, we want to broaden the Oka alliance as our vehicle,” he said.

In their Tuesday meeting, the Oka chiefs failed to agree on whether to work with Raila or not. Kalonzo and Musalia stood firm against reuniting with the ODM boss.

However, Wetang'ula and Gideon had indicated they would not have a problem teaming up with Raila again, signalling deep-seated differences that Oka will have to confront before next year.

The principals are also said to be split on how to pick their presidential candidate. Kalonzo prefers a model that factors in seniority and the Nasa agreement.

However, Musalia favours a scientific method that looks at the number of votes each of the principals can bring to the table. The ANC leader and Kalonzo are the only principals battling for the Oka ticket.

The Oka chiefs are expected to retreat in the coming days to settle the question of whether they can work with Raila.

Some of their allies are insisting they should reunite with Raila to bolster their 2022 chances.

Kalonzo and Musalia have said they would only deal with Raila if he plays second fiddle, but he wants to be president.

Alliance described as one that cannot stand on their own, and has to be propped up.
News
4 months ago

New alliance facing a massive problem in agreeing on a flagbearer to avert disintegration.
News
3 months ago