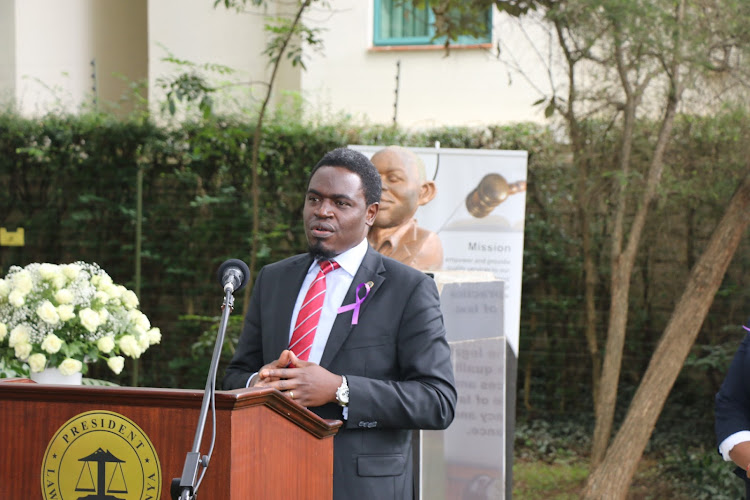 A labour court has suspended Law Society of Kenya President Nelson Havi’s decision inviting applications for the position of director of compliance and ethics at the society.

Employment and Labour Relations judge Maureen Onyango issued the directive after Florence Wairimu Muturi argued that Havi had no mandate to terminate her employment and then proceed to place an advert in one of the local dailies.

The judge also certified the case as urgent.

Muturi told the court that the provisions of the Human Resource Manual that disciplinary proceedings leading to termination of employment are to be undertaken by the staff, budget and finance committee which then makes recommendations that are conveyed to council of the Law Society of Kenya.

The charge and notice of the alleged complaint against an employee can only be drawn by the secretary or chief executive officer, in this case Mercy Wambua.

The decision, if any, to dismiss can only be reached by the council and can only be communicated by the CEO and not Havi.

“The actions of Havi in purporting to initiate and conclude the purported proceedings against me were therefore illegal,” she said.

According to the court documents, Muturi was on July 12 issued with a letter dated July 9 purportedly dismissing her with effect from July 9.

The letter was drawn by Havi. Reasons given were she failed to abide by oral and email instructions given by Havi and other council members.

Muturi had prior to receipt of that dismissal letter, neither received a notice of any accusations against her nor a hearing over the accusations.

“The manner in which Havi handled me on July 9 and the purported dismissal was unlawful and unreasonable,” she said.

Muturi says, there was no staff, budget and finance committee meeting held to discuss her employment or removal.

The interested parties in the case, among them LSK chief executive, have since countered Havi’s dismissal letter and asked Muturi to disregard the dismissal and continue with her work.

Wambua and other interested parties have also published in one of the local dailies adverts confirming that there is no vacancy and that Muturi should continue performing her roles.

Muturi has been serving as a deputy secretary and director of the compliance and ethics directorate under permanent and pensionable terms since May 9, 2016. She is also the chief executive's immediate supervisor.

“The conduct of the respondents and especially Havi in the whole process was completely biased. Instead of him playing the role of an impartial arbiter, he became investigator, judge, jury, executioner and persecutor all rolled into one.”

Case will be heard on July 27.