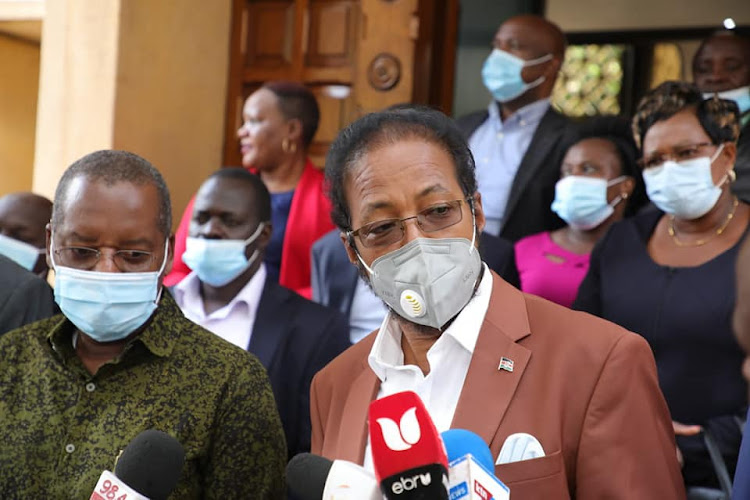 President Uhuru Kenyatta has moved to seal cracks threatening to disintegrate his Jubilee Party after blame games that followed the Kiambaa by-election loss.

The President's confidants and allies yesterday forged a united front after days of accusations and counter-accusations over the election defeat.

The leaders dropped the push to overhaul the secretariat and instead settled on a recovery roadmap that will culminate in a retreat for all elected Jubilee leaders supporting the President.

Speaking after a crisis meeting of the secretariat and MPs, the leaders said they had resolved to have a conciliation to avert a falling-out.

The team agreed on a 30-day framework to rejuvenate the party, open offices, revamp organs and enhance its presence across the country.

The meeting was attended by at least 16 MPs at the Jubilee headquarters in Pangani, Nairobi.

It resolved to have the Jubilee candidate in the Kiambaa by-election Kariri Njama challenge the outcome in court.

The session also agreed that politicians will have an active role in the running of political matters touching on Jubilee and to continue supporting the President. They will also hold grassroots elections.

“Nobody is being vilified or removed from the party,” Jubilee Party parliamentary secretary Adan Keynan said.

The Eldas MP read their statement. He said the meeting had resolved that the party will remain united despite the divergent opinions being expressed by members after the Kiambaa loss.

“Despite the divergent opinions that our members have had, we are now united and going forward we are going to work as a team, support the government and the President,” Keynan said.

Jubilee's Njama was second with 21,263 votes in a contest that was billed as a battle between President Kenyatta against his estranged deputy William Ruto.

However, on Monday, Jubilee Party luminaries sought to downplay the cracks that sprung from the Kiambaa battle, saying a more robust programme has been agreed on to streamline operations.

“This is a very democratic party. We have had our issues, we have discussed them and in the next one month, you will see this country painted in red,” Keynan said.

The two top secretariat officials had been accused by a section of Jubilee MPs of bungling the Kimbaa campaigns, an allegation that triggered a standoff that threatened to sink the party.

Murathe denied claims that he had asked MPs who led the Kiambaa campaigns for the party to account for the millions they were given for mobilising votes.

“We take the flack and responsibility when we perform below expectations. People want to create bad blood through blame games and scapegoats. Be very careful with fake news,” Murathe said.

Nyeri Town MP Ngunjiri Wambugu said Jubilee members had a candid discussion about the future of the party and agreed on a matrix that will revamp the outfit.

“Going forward we are going to see people stepping up to play what they are supposed to do. Technocrats will play technical roles while politicians will assume political roles,” he said.

“From today you are going to see a different and rebranded Jubilee. We are going to hit the ground to get a feel of what the members want us to do,” she said.

Chege, Ngunjiri and Kieni MP Kanini Kega were among the top party leaders who led the Kiambaa campaigns.

Kega was however missing during yesterday's meeting as he was said to be Mombasa. Also missing was National Assembly Majority leader Amos Kimunya.

JAVAS BIGAMBO: UDA win in Kiambaa will be body blow to Jubilee, make it party to watch

A loss in Kiambaa would be an indictment of the Jubilee leadership.
News
3 weeks ago

NGUNJIRI WAMBUGU: Kiambaa was a friendly fire within Jubilee

The reality is that no one from outside Jubilee was competing in the Kiambaa poll.
News
2 weeks ago

Says government will construct a road network of 91km at a cost of Sh3.2 billion in Kiambaa constituency.
News
1 month ago
by JAMES MBAKA Senior Political Writer
News
20 July 2021 - 09:23