The department awarded the contract to the highest bidder 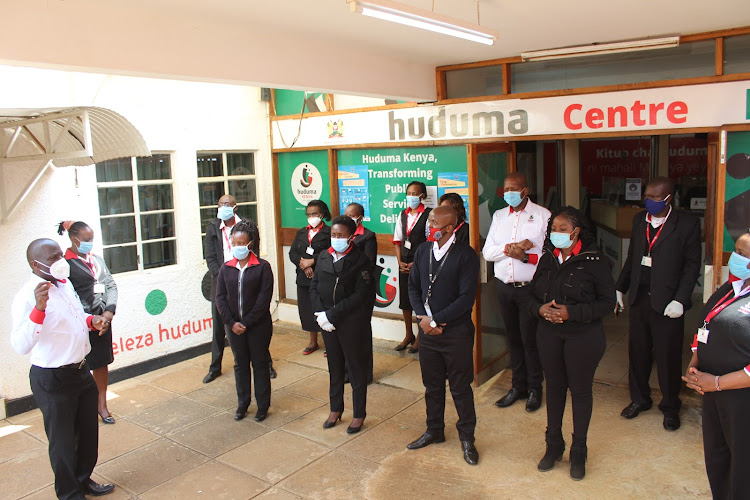 Taxpayers lost in excess of Sh25 million in the procurement of security services for various Huduma Centres across the country, a new report has shown.

The 2019-20 audit report of the State Department of Public Service shows that the department ignored a security firm that had quoted as low as Sh17,000 per guard per month.

Instead, it awarded the contract to a company that had quoted Sh37,120 leading to an overcharge that could have been avoided to save public money.

According to the report by auditor general Nancy Gathungu, out of the 12 firms that had bided, three companies that had submitted bids of Sh17,000, Sh18,000 and Sh20,880 per guard per month were not evaluated.

The bids, according to explanation fronted by the department, were considered not feasible on the basis of business sustainability, administrative support and logistics as was demonstrated by the narrow margins and therefore not recommended for award.

“The Evaluation Committee introduced an extraneous criteria in arriving at the decision contrary to Section 80(2) of the Public Procurement and Asset Disposal Act, 2015,” the report read.

The remaining nine firms were responsive and taken through the full evaluation.

The Evaluation Committee computed the average price based on the quoted prices by the nine firms that yielded Sh27,940 per guard per month inclusive of VAT.

However, the department awarded the Sh67.67 million contract at Sh37,120 per guard per month resulting to an overcharge of Sh9,180 or 32.9 per cent above the average price an extra-charge that could have been avoided to save hard earned taxpayers money.

The department, domiciled in the Ministry of Public Service, Youth and Gender Affairs headed by CS Margaret Kobia, did not provide any explanation or justification for awarding the contract at a higher price.

The ministry also used an expert contract to pay Sh11.81 million to a firm that provided communication consultancy services for Huduma Kenya programme.

According to the report, the payment was made on the strength of a memo by the Director, Communications and Public Relations at Huduma Secretariat indicating that a quarterly report produced by the department demonstrated a true reflection of the work carried out by the service provider.

“However, there was no evidence to show that the report was taken through any process of evaluation and acceptance by any committee including the Project Steering Committee to justify its acceptability in line with Section 48(3)(b) and (4)(b) of PPAD Act, 2015,” it states.

Further, the auditor questioned the department’s expenditure of Sh6.08 million in the procurement of insurance cover for CSs, PSs and other senior government officials for a period of only one month.

The department did not justify the procurement of the service for a period of only one month. In addition, the department used an expired contract as basis of payments.

This is contrary to the provisions of Section 135(1) of the Public Procurement and Assets Disposal Act, 2015 contrary to PFM Act.