• A letter from the Iraqi Embassy asked family to send about Sh800,000 to pay for transport of Lucy's body home.They only managed to raise Sh400,000.

• The body will be disposed of if it is not collected  in six months. 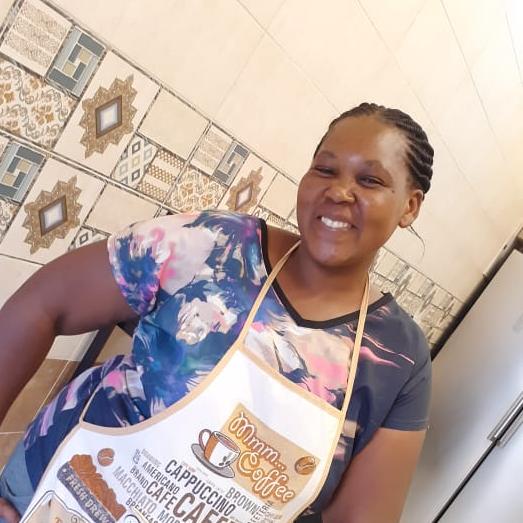 A Nairobi family is desperate to raise Sh400,000 to bring the body of their loved one, Lucy Wambui, home from Iraq where she worked.

Like many other Kenyans, Lucy went to be a househelp in the Middle East. She leaves behind four children, cared for by her parents.

She died in December 2020 of pneumonia complications, an Iraqi coroner said.

If her body is not collected in six months, it will be disposed of in Iraq.

This is what's included in the cost:

Others are scented materials, all government fees in Baghdad, customs clearance, transportation to the airport, cargo from Baghdad to Kenya, wages of preparing the coffin, finalising the document and wages of labour from Iraq to Kenya.

Lucy 's brother Harun received a letter on June, 9 from the Embassy of Iraq, asking the family to send approximately Sh800,000 to cater for transportation of Lucy’s body.

The embassy said the remains would be disposed of if it is not transported in six months.

“The Iraqi Embassy informed that to facilitate quick repatriation of the remains of the late Ms Lucy Wambui Ng’ang’a , the deceased family would be required to pay USD 7,000 (Sh757.374) ,” the letter reads.

The family has solicited for funds but only has half the amount.

After raising the full amount, an account number will be handed to the family to submit their payment.

“According to the request form No. 14528 on the date of 22/12/2020, I found the cause of death stopped in the laboratory, and the final cause of death was pneumonia and its complications,” the letter reads.

The family tried reaching the Ministry of Foreign Affairs for help but were referred to National Employment Authority that registers  businesses and agencies.

In Iraq she was shifted from one employer to another but without formal documents.

Two days later, another Kenyan working in Iraq heard of Lucy’s death and posted the information on a Kenyan WhatsApp group.

On December 28 that year, her brother Aaron Ng’ang’a received the  news his sister had died in her employer’s house.

Later, four  people reached out to Aaron giving him details of his sister’s passing. Since then the family has been trying to get the body from Iraq.

They visited the Iraqi Embassy in Gigiri where they were advised to hire a lawyer to help them pursue the case. (See letter from Iraqi Embassy below).

As Lucy's family tries to raise funds to help them get back Lucy's body, the family is calling on the National Employment Authority to deal with agencies that link women to the Gulf countries for employment.

The authority has said agencies usually convince women with promises of large salaries and good jobs, but once the women are there, their lot is nothing of the sort.

Below is the letter from the Embassy of Iraq to Lucy's family. 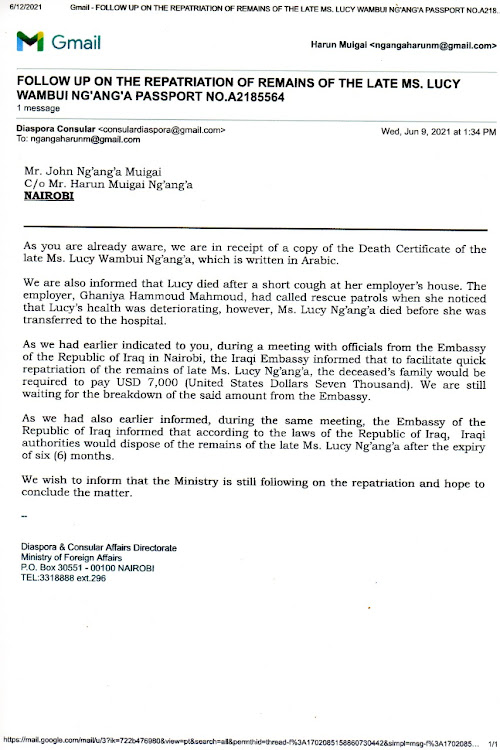