Illegal fishing by foreign fleets have plundered the country’s wealth since early 1990s.

• Somalia has one of the richest fishing resources in Africa, with an estimated annual value of US$135 million.

• Somalia introduced a new licensing system for foreign fishing vessels in 2018 to spur legal fishing and reduce IUU within its EEZ. 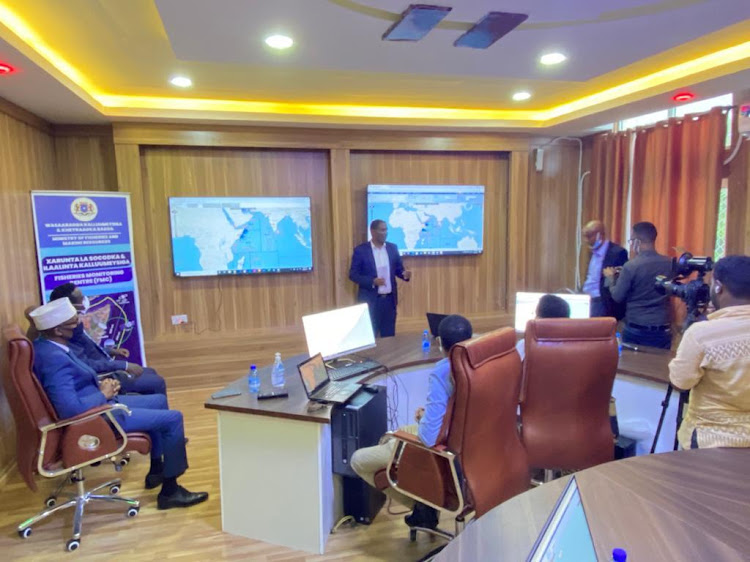 Somalia's Fishing Monitoring Centre in Mogadishu that keeps tabs on fishing vessels within the country's ocean using a satellite-based system. It was launched in March this year.
Image: COURTESY

Somalia is banking on key recent reforms in managing offshore fishing, and enhancing monitoring of its resource-rich ocean to combat illegal, unreported and unregulated (IUU) as the country seeks to draw greater benefits from its untapped ocean wealth.

With mainland Africa’s longest coastline (3,300 kilometers) and an Exclusive Economic Zone (EEZ) of more than a million square kilometers, Somalia has one of the richest fishing resources in Africa, with an estimated annual value of US$135 million.

But illegal fishing by foreign fleets have plundered the country’s wealth since the collapse of the central government in the early 1990s.

Somalia introduced a new licensing system for foreign fishing vessels in 2018 to spur legal fishing and reduce IUU within its EEZ. The system was lauded as “transparent” by the country’s key international partners, including the World Bank and UN Food and Agriculture Organization (FAO).

“The licensing system is providing credible foreign fishing fleets the opportunity to legally and sustainably develop the last untapped fishing grounds in the Indian Ocean. We are working to implement the licensing system effectively to reduce the incentive for IUU,” said Mohamud Sheikh Abdullahi, Director General at the Federal Ministry of Fisheries and Marine Resources (MFMR).

“We are seeing growing interest in the fishing licenses. Fishing vessels that would have potentially operated illegally in Somalia’s EEZ are seeing the benefits of coming forward and working legitimately with the government. This trend would help to gradually reduce IUU,” he added.

In November 2018, MFMR issued the first annual offshore fishing licenses to 31 foreign vessels, following a revenue-sharing deal between the Federal Government of Somalia (FGS) and the Federal Member States (FMS).

By early 2021, the licensed foreign fleet had grown to 50, indicating the potential for attracting more vessels. Currently, 21 fishing licenses are active. MFMR projects annual revenue from fishing license sales to increase to US$10 million in the next few years up from US$ 1 million in 2018, while in 2020 it was nearly US$3 million.

Under the licensing arrangement, only MFMR has the authority to issue offshore fishing licenses beyond 24 nautical miles (nm) of the country’s coast while the licensing revenue is shared with FMS. Some of the revenue goes towards the development, management, and preservation of Somali marine resources, as well as supporting local fishermen.

Licensed foreign vessels have to report their catch and are barred from destructive fishing methods like trawling. The fleets are only permitted to catch migratory fish like tuna and tuna-like species and operate beyond the 24 nm of the coastline, leaving near-shore fishing to Somali vessels and small-scale fishing communities.

Despite the progress in promoting legitimate fishing that benefits the country, Somalia’s capacity to monitor legal and illegal fishing by foreign vessels within its vast EEZ remains weak, but this seems to be gradually changing.

Minister Bidhan said more FMCs will be opened in FMS to further enhance monitoring of fishing vessels and combat IUU. However, vessels fishing illegally tend to disable tracking equipment on board, making it a challenge to monitor them.

Meanwhile, Somalia has been seeking direct and timely data sharing on IUU from the European Union anti-piracy Naval Force (EUNAVFOR) operating off the coast of Somalia, to enable law enforcement action. EUNAVFOR’s current mandate allows it to transmit the information to DG MARE, the European Commission’s department managing maritime affairs and fisheries policy. By the time this information trickles to FGS, it’s usually too late to act.

To compensate for capacity constraints in securing its EEZ, FGS seems to be successfully deploying diplomatic methods to curb illegal fishing. In May last year, it secured the exit of unlicensed Chinese vessels from Somalia’s waters after petitioning the Embassy of China in Mogadishu. In March this year, MFMR raised an alert against Egypt-registered vessels fishing illegally within its EEZ and reached out to the government of Egypt to take action.

Recently, a report by the Global Initiative against Transnational Crime alleged that foreign vessels engaging in illegal fishing in Somalia are facilitated by some officials within the government. However, MFMR has rejected the allegation and vowed legal action against the report’s author and publisher.

“The report disregards and undermines Somalia’s efforts to combat illegal fishing. The report’s author is malicious and has been writing reports that are detrimental to national interests. In September 2020, he wrote a report that antagonized Somalia’s remittance companies, with an aim of slumping the country’s economy, which is heavily dependent on remittances,” read a MFMR statement.