CS says every situation will be considered on its own merits 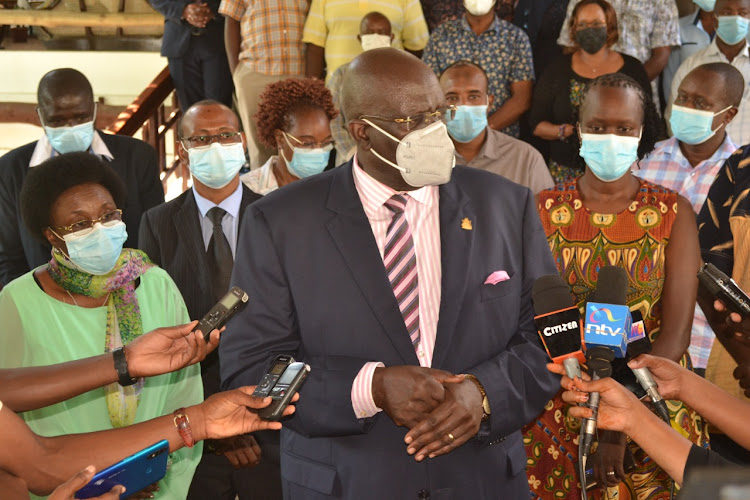 Reports have circulated about the imminent abolition of boarding primary schools in the near future.

However, the CS said that is not a government priority now.

"Our denominator is the child. Before we do anything, we have to consider what is going to happen to the child," Magoha said.

Schools are to reopen on July 26.

He spoke to the press at Reef Hotel in Mombasa where he presided over the training of county projects technical teams. The topic was "transformational leadership to implement education reforms and the sustainability of donor-funded projects.

The training will go on for six days.

Magoha said blanket abolition of boarding primary schools may not be smart.

He said there are people working outside the country who have children in boarding primary schools.

"If there is a boarding school catering for them, it would not be wise for us to have a policy framework that says we abolish all of them," the CS said.

He said every situation will be considered on its own merits, adding that even at the high school level, there is no plan to abolish boarding schools at this time.

"There is thinking in that direction but it will have to be a gradual process as we implement the Competency-Based Curriculum,"Magoha said.

He said some may still survive.

Going forward, the government may be constructing only day schools he said.

As schools are reopening in a week, the CS warned teachers and school managers against disrupting learning on account of school fees.

Government has given all money that was required for the year 2020.

Magoha said first-term money will be given as soon as Ifmis is open.

"So there is no need for parents to be worried about school fees as such," he said.

The CS said primary school education is free and compulsory under the Constitution.

"So nobody pays any fees except if voluntarily they want to pay for lunch," Magoha said.

He said 75 per cent of secondary schools in Kenya are day schools.

Government gives Sh22,244 for every child in day and boarding secondary schools, which caters for all manner of needs.

"So, again, as far as 75 per cent of secondary schools are concerned, there is no fee required except, again, perhaps for uniform and lunch, which will be voluntary and according to what they can afford," the CS said.

He noted that the boarding fees have also been reduced because the term has been reduced from 39 to 30 weeks.

"I encourage our parents who can afford to pay to pay early so managers are able to run the schools," Magoha said.

He said the ministry will be on the lookout to ensure no child is disadvantaged because of school fees.

The 100 per cent transition remains a priority for the government and Magoha said they will make sure every child who did the KCPE exam goes to Form 1.

"In addition, we shall mop up any other child who was out of school and take them to the appropriate level of schooling," the CS said.

This will be done in collaboration with Fred Matiang'i's Interior ministry.

The CS said the Elimu Scholarship is complete and all the beneficiaries are genuine.

"We shall ensure that those children who got those scholarships go to boarding schools because day school is free," he said.

Teachers, he noted, should ensure all schools are ready to receive learners for the next term.

He said the government released all the money for last year towards the end of the last term, meaning schools still have money in their accounts.

"They have no reason to surcharge any child and we shall be firm in our action if we find that you are surcharging a child," Magoha said.

The CS said he will make an example out of a primary school he found on Sunday was surcharging a child Sh11,000 for lunch.

"That is horrendous and we are going to deal with it," he said.

Magoha hailed the CBC curriculum being overseen by Prof Fatima Chege, saying it is in good state.

He said all the books for Grade 5 are already delivered in 97 per cent of the schools. Schools in the northern parts of the country, like turkana, are still in the process of receiving books.

"The books shall be in all schools by July 26," Magoha said.