The Kiambaa parliamentary seat fell vacant with the death of Paul Koinange.

•UDA Secretary General Veronica Maina said their agents and voters have been threatened by the presence of unknown individuals believed to be armed.

•She claimed that the 'goons' are believed to have been deployed by Jubilee. 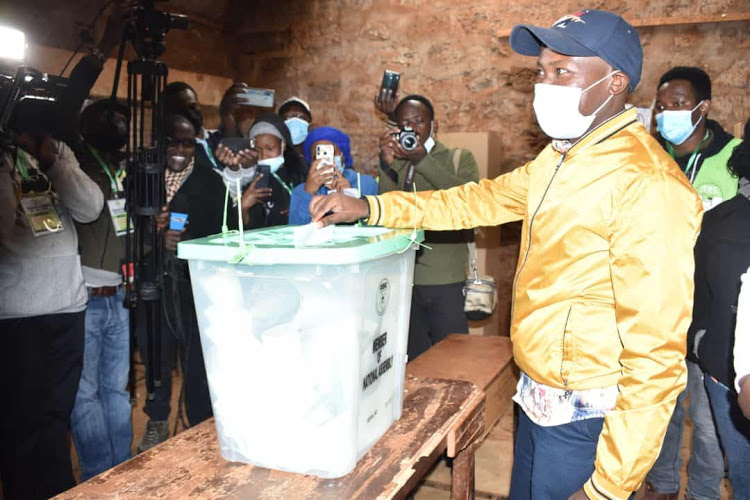 The United Democratic Alliance has complained of intimidation as vote counting for the Kiambaa by-election begins.

In a statement on Thursday, UDA Secretary General Veronica Maina said their agents and voters have been threatened by the presence of unknown individuals believed to be armed.

She alleged the 'goons' are believed to have been deployed by Jubilee.

"Our attention has been drawn to the presence of unidentified armed persons who are believed to have been deployed by Jubilee party totaling 15 in every polling station on a mission to disrupt the voting and ultimately counting of votes," Maina said.

In the letter to the IEBC, Maina demanded urgent intervention by the electoral body and protection for agents, voters and observers at polling stations.

"We expect the security personnel to clear the goons and bar them from accessing any polling station or the tallying center or its precincts as defined by law," she said.

Despite low voter turnout, the Kiambaa by-election appears to be a two-horse race between Jubilee's Kariri Njama and UDA's John Njuguna Wanjiku.

To prove their political strength, Deputy President William Ruto and his team have staged a fierce contest to make Jubilee appear powerless politically in Kiambaa and Muguga wards.

There are eight candidates in the Kiambaa by-election.

The Kiambaa parliamentary seat fell vacant with the death of Paul Koinange who succumbed to Covid-19-related complications in March.

Koinange, who was key in the campaigns for the Building Bridges Initiative in Kiambu county, was chairman of the Departmental Committee on Administration and National Security and a critic of the Deputy President.

Angry residents claimed that Kimunya was not a voter nor an agent in the by-election.
News
2 weeks ago

Kuria had alleged that IEBC officials were conducting elections in a plantation.
News
2 weeks ago
by BRIAN ORUTA Digital Journalist
News
15 July 2021 - 18:44