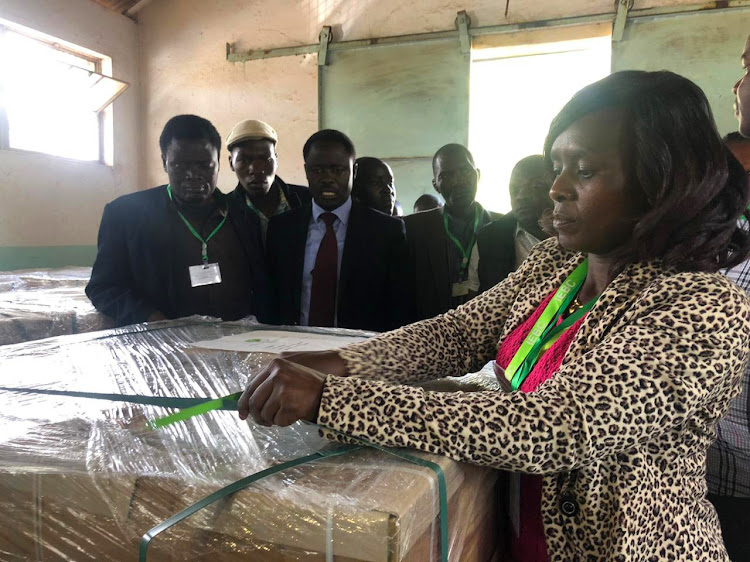 A poll official opens a box with poll materials at an IEBC store.
Image: COURTESY

Details have emerged revealing the security features that the IEBC seeks to embed to ballot papers as well as election results forms that would be used in the 2022 general election.

The electoral commission floated the tender for the materials it seeks to use in the election as well as a referendum, should the courts okay the BBI process.

IEBC, possibly cognisant of the verdict of the Supreme Court in the nullification of the 2017 presidential election, has set the features for ballot papers, results forms, and the voter register.

Among issues raised in the petition by ODM leader Raila Odinga was that some results were declared using non-statutory forms.

Ballot papers would be required to have a guilloche security pattern and a micro-text that can only be visible under a minimum magnification of 10 times.

“When tested, the micro text shall be read as “Independent Electoral and Boundaries Commission” or any other text specified by IEBC,” the tender document reads.

The Wafula Chebukati-led commission adds that the ballot paper shall have at least one generic watermark visible when examined under normal light.

Bidders will be required to supply ballot papers with an IEBC logo as a security feature visible only under ultraviolet light.

Further to this, the paper will be fixed with an anti-copy feature which displays the word ‘copy’ when photocopied or scanned.

According to the specifications, the presidential ballot paper shall be white whereas that of MPs will be green.

The ballot paper for MCAs election will be brown, yellow for Senate vote, purple for Woman Rep, sky-blue for governors, and grey for referendum.

Results declaration forms to be used at the polling station are required to have security features imparted by inks, dyes, electronic or suitable mechanisms.

Like ballot papers, IEBC wants the papers fitted with UV light sensitive security features, among them an IEBC logo as visible only under UV light.

The forms will also be fitted with a tapered serialisation with tapered number codes and one generic watermark visible under normal light.

The forms will also be fitted with anti-copy security features to ward off instances where poll results are declared using duplicated forms.

“The five self-carbonated copies of the form to be used at the polling station shall be perforated,” the commission said.

IEBC says the dimensions of the election result declaration form used at the polling station will be A4, A3, A2 or any other size, depending on the number of candidate per elective position.

The commission wants that, when examined visually, the background portion of the back and the unprinted portion of the front side of the forms should match colour codes.

The colour code for Form 34A used in presidential elections will be white, green for Form 35A used in the election of members of the National Assembly, and brown for Form 36A used in MCAs elections.

Form 37A used in governor elections will be sky-blue, yellow for Form 38A used in Senator election, purple in the case of Form 39A for Woman Rep, and grey for Form43A used in referendum.

“When writing impressions are created on the original manuscript of the result declaration form to be used at a polling station, it shall be self carbonated up to a maximum of five copies,” the rules read.

The commission is further seeking to fit security features on the voter register, more prominently a watermark visible under normal light and anti-copy features.

To ward off instances where parallel registers may emerge during voting, the commission seeks to have the books embedded with its logo that are visible only under UV light.

“The IEBC register of voters shall be serialised with number codes as specified by IEBC. The serialisation shall be printed indelibly and legibly with ink,” the tender document reads.

“Only tenderers that meet the technical evaluation criteria without any material deviation, reservation or omission shall be considered further in the qualification evaluation of bids,” the IEBC said.

Ballot printing tenders have been a subject of controversy at the commission, considering the hue and cry that followed IEBC’s single sourcing of Dubai-based Al Ghurair Printing and Publishing Company to print ballot papers for the 2017 elections at Sh2.5 billion.

The firm was contracted to print 120 million ballot papers for the August 8 elections, a choice IEBC said factored the firms’ capacity, history of work done in Africa, logistics and pricing. 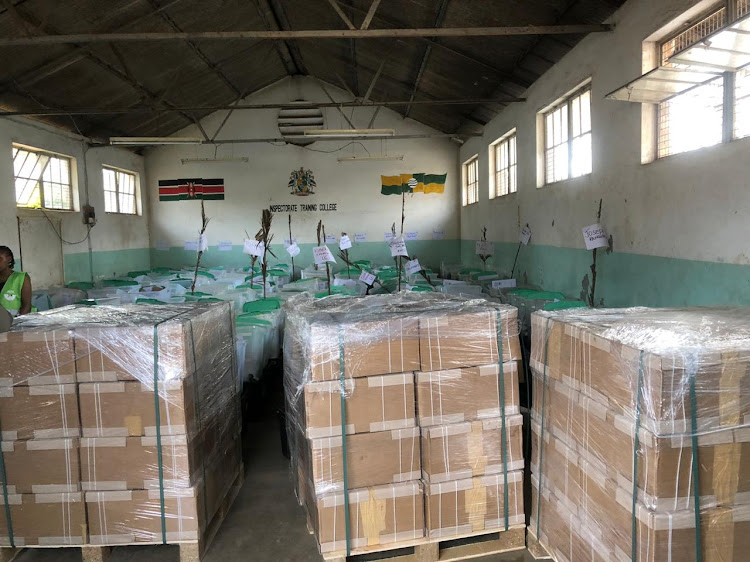 He told the Star on Wednesday that the commission was yet to file responses to his suit where he claimed that the electoral agency was about to renew an existing printing contract with the De La Rue.

The ballot papers tender for 2013 elections was also marred with controversy following the conviction of two UK officials of Smith and Ouzman—the contractor—for bribing IEBC officials.

In the latest bid, Kenyans have raised questions on why the commission is procuring referendum materials yet the courts stopped further preparations for the plebiscite.

In what may lock out many local firms from the tender, the commission wants firms which have been manufacturing similar material for the last 10 years.

Interested bidders will be required to submit a manufacturing licence issued by authorities in the country of origin of the goods.

IEBC would also consider tenderers that have completed contracts for security printing of goods or election material, cumulative of Sh5 billion within the past 10 years.

The bidding firms will also be required to demonstrate that it would meet the supply cash flow of Sh10 billion as well as proof of disaster recovery plan within 48 hours.

Dismisses claims by the prosecution that he approved changes to the signed contract for the gadgets.
News
2 years ago

Chairman said areas without 3G to be provided with alternative technologies.
News
1 year ago
Post a comment
WATCH: The latest videos from the Star
by MOSES ODHIAMBO Journalist and Political Writer
News
15 July 2021 - 07:25
Read The E-Paper