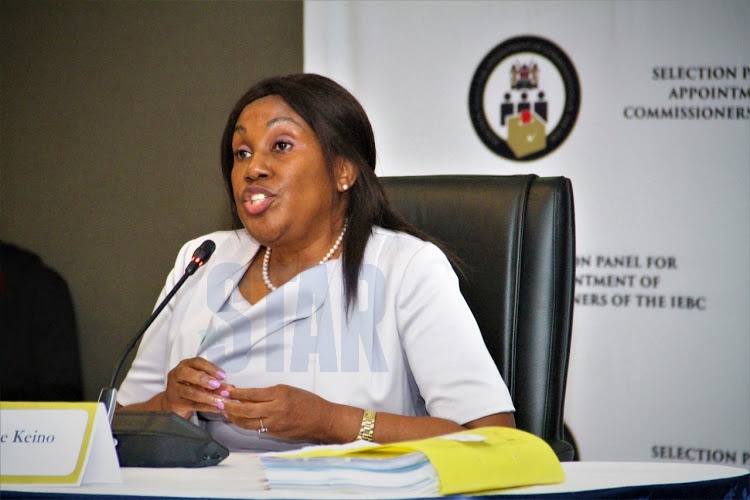 The tenure of Irene Keino at the helm of EACC returned to haunt her when she appeared before the team interviewing candidates for appointment to the IEBC.

The former vice-chairperson of the anti-graft agency found herself between a rock and a hard place when the panel asked her to explain the situation surrounding her resignation in 2015.

Keino said she quit to restore public confidence in the Ethics and Anti-Corruption Commission.

“I was guided by the Constitution and legal advisors who told me EACC needed to have public confidence,” she said.

Keino said by the time she was resigning, public confidence in the performance of the anti-graft agency had been severely eroded.

The panellists however wondered how a person who was forced to resign over ethical issues would be suitable for a top job in yet another constitutional commission.

Keino said she did not go to court to challenge recommendations of a report by Parliament that called for her removal.

She was further asked to demonstrate how she would help to boost the confidence of the public in the IEBC.

IEBC placed the cost of the August 2017 General Elections at Sh49 billion.
News
2 weeks ago

Keino noted that the situation at EACC then and the circumstances at IEBC now are very different.

“When I look at EACC at the time of leaving, issues were different, perceptions were different, the leadership as well. I have learnt so many things in six years since I left, I have also matured,” she told the panel.

The panel noted that Parliament had recommended to the President to form a tribunal for her removal in April 2015.

Keino resigned just hours after members of a tribunal appointed to investigate her and then suspended EACC chairman Mumo Matemu were sworn in.

There were claims Keino was forced to resign by President Uhuru Kenyatta's administration rather than appear before the tribunal.

However, in her letter to Uhuru, Keino said she resigned to spare her family the anguish of a judicial process that will cause them unimaginable pain and to lend my support in the fight against corruption.

She resigned alongside commissioner Jane Onsongo after a meeting at the State Law Office where they met then Solicitor General Njee Muturi, Uhuru’s advisor on constitutional affairs Abdikadir Mohamed and former Ainabkoi MP Samuel Chepkonga.

Chepkonga was also the chairman of National Assembly's Justice and Legal Affairs Committee.

The interview panel however told Keino that the recommendation by Parliament for her removal would amount to dismissal.

She was told lawyers normally advise their clients to resign before they are fired so that it does not become a dismissal.

Keino is among 36 candidates who were shortlisted to fill four vacant positions at IEBC.

IEBC has been operating with only three commissioners, following the resignation of Roselyn Akombe, Paul Kurgat, Margaret Mwachanya and Connie Maina.

The chairman Wafula Chebukati has been sitting with commissioners Boya Molu and Abdi Guliye.

Keino was interviewed earlier on Tuesday. She warned that Kenyans will keep electing wrong leaders if campaign financing is not checked.

She pointed out to the panel that she dropped out of the race for a woman representative seat in 2017 in Elgeyo Marakwet since she could not match the amounts of money her rivals had for campaigns.

She said the culture of handouts is deeply entrenched and is a big challenge to a fair electoral process.

Keino, currently working as an independent director at the National Government CDF board, said that most Kenyans are poor and will tend to vote for politicians who give the most handouts.

“It was not just about handouts but one needed a lot of money to move around with people and feed them at the same time. At the end of the day, you were also expected to give them allowances,” she said.

Keino said that sometimes, the money is not given out as bribery but as an inducement.

“You need at least Sh100 million to campaign for woman representative seat in rural areas. I had so little money, an amount I cannot tell this panel,” she said.

Joseph Gitile Naituli, a professor of management and leadership at Multimedia University told the panel that Kenyan elections are unnecessarily expensive.

He said Kenyan polls are expensive because of some of the decisions made by the electoral body and its stakeholders.

He explained that there was no reason for the electoral body to print ballot papers abroad.

“Some of these decisions are driven by lack of trust in Kenyan institutions. However, the electioneering period should not be a season of people to do business,” he stated.

If appointed a commissioner, Naituli promised to persuade the chair of the polls agency, colleagues and stakeholders, among them political parties and the Office of Registrar of Political Parties to print ballot papers locally.

“We need to come together and have a committee that will oversee the printing of ballot papers and use the government printer. We will end up saving a lot of money,” he said.

“We need to stop this distrust in our institutions. I am sure my idea will be supported. I am very persuasive and the chair is a patriotic Kenyan who would want to spend all money in Kenya.”

IEBC placed the cost of the August 2017 General Elections at Sh49 billion.

It made the 2017 general election Kenya’s most expensive election in the world when the cost-per-eligible-voter metric is used.

In East Africa, Rwanda’s last election was the most cost-effective election, with the electoral agency there spending US$ 6.9 million for the 6.8 million voters or US$1.05 (Sh100) per voter on average.

In contrast, Kenya’s average cost for the August 8 polls reflected an increase of more than half on the 2013 elections and is a quarter more expensive than in 2007.

The cost of the election in Uganda’s last polls was US$4 (Sh400) per voter.

"Kenyans are poor and will tend to vote for politicians who give the most handouts."
News
2 weeks ago
by ALLAN KISIA Political Writer
News
13 July 2021 - 17:12