Inside Uhuru’s strategy to leave a mark in every region 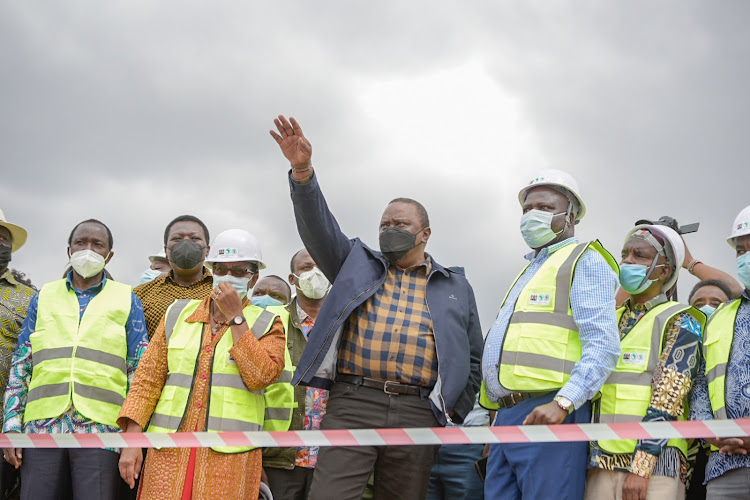 President Uhuru Kenyatta accompanied by other leaders during the inspection of the construction of Thwake Dam.
Image: PDU

President Uhuru Kenyatta and his think tanks have designed a strategy to implement at least one mega infrastructure project in every region before he leaves office next year.

The head of state has personally hit the road inspecting the progress of the multibillion-shilling projects and commissioning and launching some, a year to the end of his tenure.

In an effort to cement his legacy and ward off criticism, including from his deputy William Ruto, that his administration is not doing enough to transform Kenya, Uhuru is pushing for the completion of mega projects before his term ends.

At the weekend, he visited Lower Eastern where he inspected the construction of the multi-billion-shilling Thwake dam and Konza technology city.

Makueni Senator Mutula Kilonzo Junior said as a community they are happy.

"Before the visit, the President organised for us to meet technical teams of the respective projects. The Presidential Delivery Unit presented a matrix of all the projects the government is doing in Makueni and the two other counties," he told the Star, adding that even for some projects that had stalled there is now a clear implementation plan.

"Now, Wote stadium will be completed in December. Some of the roads in Sultan and Mbooni will be revived. We are happy. For Thwake and Konza, we are happy that the timeline has been fast tracked before the next general elections."

Uhuru has been to Nyanza, Coast and is schedule to visit Rift Valley, Western and other regions in his development tours.

Uhuru's predecessor Mwai Kibaki is remembered fondly for the 50km long Thika Superhighway in Nairobi as well as the construction of several link roads in the capital.

“Some people are questioning why we are putting up infrastructural projects throughout the country. We know the importance of infrastructure,” the President said in Makueni on Saturday.

“When there is good infrastructure wananchi will be able to do their businesses without any hindrance,” he added.

In May, Uhuru launched the Sh310 billion new Lamu port, becoming the first head of state to start and complete construction of a port within his term.

In the larger Western region,  his biggest project is the revival of the Kisumu port and the extension of the meter gauge railway to Kisumu.

During the inspection of Thwake Dam, the President said he will officially launch the Sh42 billion investment in June - five months earlier than the contractual completion date.

The auditor general had raised concerns over upstream pollution of water draining into the dam.

However, the President has ordered Nema to decisively deal with the menace.

Sitting on 9, 217 acres, Thwake Dam is 10 times the size of Ndakaini dam. It will supply water to 1.3 million residents of the three counties in the Lower Eastern region.

About 150,000 cubic metres of water will be supplied per day. The project is 55 per cent complete.

“Its completion is targeted somewhere between June and December, 2022 and we are working day and night to ensure that the end of June will mark the completion of this project,” Water CS Sicily Kariuki said.

The dam will also be used for power generation where an estimated 20 megawatts will be produced.

“That will then be followed with the irrigation component where 100, 000 acres of land will be put under irrigation,” the CS said.

Currently, 1, 161 residents are directly employed at the site.

Later on Saturday, the President visited Konza Technopolis in Machakos and launched two key projects as he gave assurance that the government will complete the country’s first smart city.

It is envisioned to be a world-class city, powered by a thriving information, communications and technology sector, superior reliable infrastructure and business friendly governance systems.

Uhuru launched eight-storey headquarters of Konza Technopolis Development Authority (KoTDA) and the National Data Centre that will be the biggest in East Africa.

“Upon completion of the project in the next few years, Kenya’s position as global hub for science, technology and innovation will be entrenched further,” the President said.

About 2,500 jobs have been created. Markets for local materials in the construction sector have been boosted as neighbouring towns and centres grow.

Soon, the President will launch the Sh18.4 billion Kibwezi-Kitui road as he promised to open up the region.

Last Tuesday, Uhuru inaugurated five of the 19 hospitals – built from scratch in a span of one year – in informal settlements in Nairobi at a cost of Sh2 billion to improve services to the residents who have been traveling for long distances to get treatment.

He directed that the facilities operate round the clock.

The government is also building Sh62 billion expressway from JKIA to James Gichuru on Wayiaki to deal with the perennial traffic jams.

The project, according to Transport CS James Macharia, will be completed in February next year instead of September as captured in the contract. It is currently 60 per cent complete.

“We requested the Ministry of Interior to offer security to the contractor to ensure smooth operations on a 24-hour basis. We are glad they are working in shifts that will see the road completed before schedule,” the CS said.

The ministry is also rolling out infrastructure ahead of the introduction of the bus rapid transport (BRT) in an effort to improve public transport and decongest the city.

Besides, the government is also constructing Sh17 billion James Gichuru Junction-Rironi and the 16km Nairobi Western bypass in the capital in a bid to ease movement.

Last month, the President launched the Sh3 billion refurbished Kisumu port to exploit the water resource, link Kenya to the region and unlock the economic potential of the lakeside city and its environs.

“The rival of this port was informed by the need to revamp the economy of East Africa region and beyond,” he said.

He also commissioned Kenya Shipyard Limited that will repair, refurbish and rehabilitate ships for use in the lake. It will be the first time a ship will be built from scratch in the country.

The Lamu port is only the second port in the expansive coastal region after Mombasa port which was built by colonialists.

The Lamu port will unlock the potential of the Sh2.5 billion Lamu-Port-South Sudan Ethiopia Transport Corridor project (LAPSSET) which was launched in 2012.

“When complete, the Sh310 billion port will have 32 berths, 29 of which will be financed by the private sector, making it the largest deep-water port in the sub-Saharan Africa,” the President said.

The President’s administration is also implementing other major projects in the Coast region including the Sh28 billion Dongo Kundu bypass.

Later this month, Uhuru is expected to visit Rift Valley to inspect, launch or commission key infrastructural projects worth more than Sh30 billion

The include Kapchorwa-Suam –Kitale road. He will also issue title deeds to the locals.

In his Mt Kenya backyard, the government is constructing Sh30 billion Kenol-Makutano-Karatina-Marua highway.

Many other link roads are under construction in the region.

In Western, the government has constructed 98km Kisumu, Kakamega Webuye road. The 62km Webuye-Malaba road is under construction. This is the case with the 60km Eldoret-Webuye road.

In Northeastern, the government is set to construct 784km Isiolo-Mandera Road and the 121km Marille-Marsabit road.