Jaoko said Swahili was not given much attention during her days in primary school.

• Rev. Joseph Ngumbi, a member of the panel, had pointed out that Jaoko would at some point be required to go to the grassroots to talk to voters.

• Florence Jaoko struggled to make complete Swahili sentences when the panel asked her to demonstrate how she would explain her roles to voters who don’t speak English. 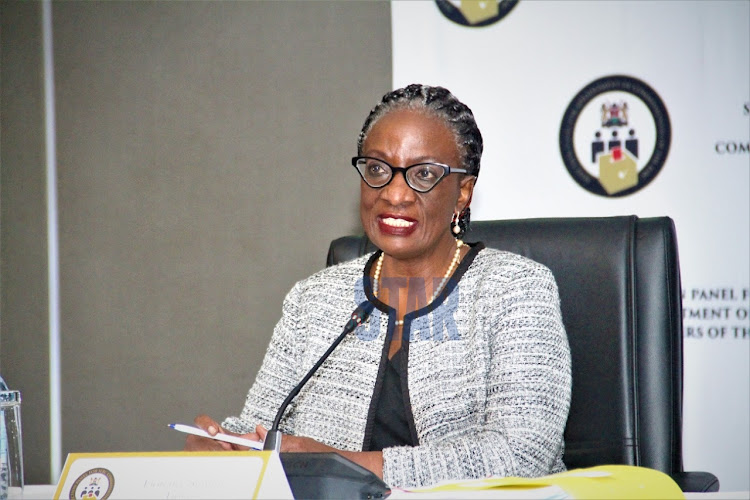 Florence Simbiri Jaoko before the selection panel for appointment of commissioners of IEBC at KICC on July 12, 2021.
Image: EZEKIEL AMING'A

A candidate for a position at the electoral agency found herself on the spot when she was asked to illustrate how she would communicate to voters in Swahili.

Florence Jaoko struggled to make complete Swahili sentences when the panel asked her to demonstrate how she would explain her roles to voters who don’t speak English.

Jaoko had appeared before the Selection Panel for the Appointment of Commissioners of the Independent Electoral and Boundaries Commission for the oral interviews.

Rev. Joseph Ngumbi, a member of the panel, had pointed out that Jaoko would at some point be required to go to the grassroots to talk to voters.

After making some efforts, Jaoko retreated to English saying Swahili was not given much attention during her days in primary school.

“Let me just explain this in English. When I was a judicial officer in Kibera, I could hardly speak Swahili. But in one year’s time, I used to deliver my judgements in Swahili," she said.

"When you are in that environment, and people are giving their evidence in Swahili, you get to know the language. I was actually the one asking lawyers to just ask in Swahili.”

Jaoko, a former chairperson at Kenya National Commission on Human Rights (KNCHR) further assured that she would quickly learn the Swahili words to use when communicating issues to do with elections.

“Believe it or not, if I join IEBC, I will know the proper words that are needed to communicate at the grassroots. I also learned the words when I was with KNCHR,” she told the panel on Monday.

Monday was the fourth day of the interviews. So far, nine shortlisted candidates have taken the oral interviews.

Jaoko was among 36 applicants who were shortlisted to fill four positions that were left vacant following the exit of Roselyne Akombe, Paul Kurgat, Connie Maina and Margaret Mwachanya after the 2017 General Elections.

Jaoko further said Kenyans should be able to confirm their voter details in any IEBC constituency office.

She said the information should be accessible at the nearest IEBC constituency office so that Kenyans are not forced to travel long distances to confirm their details.

She said the IEBC should also publish all the details online as a way of curbing instances where people find their names missing when they go to vote.

“If the details could be made available in good time, then those who will have problems with their particulars will have time to have the issues addressed,” she explained.

Jaoko further said IEBC should also educate voters on some of the hitches they are likely to encounter as they go to elect their leaders.

She added that the procedures to address the problems should also be explained in advance.

“It is not that we will be expecting too many hitches but Kenyans should be told of problems that are likely to occur and how they will be addressed. This will help reduce suspicion and entrench trust in the electoral body,” she said.