Raila's presence has affirmed reports the President is grooming him as the heir apparent. 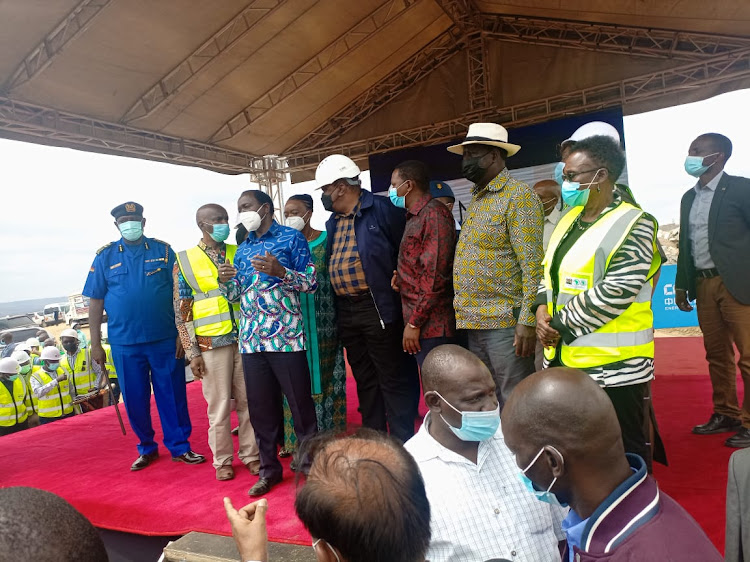 President Uhuru Kenyatta has tagged along ODM chief Raila Odinga in his Ukambani trip, exposing the progress made in his efforts to unite Nasa chief ahead of 2022.

The trio's visit to the Ukambani region comes amid reports that Uhuru could have held private talks on Wednesday with Raila and Wiper Leader Kalonzo Musyoka.

The meeting was seen as crucial in thrashing out sticking personal issues between Raila and Kalonzo, especially after the Wiper boss vowed never to back the ODM boss again.

During Uhuru's much-hyped development tour of Raila's Nyanza backyard in May, the President did not rope in any of the opposition bigwigs save for the ODM chief.

However, Raila's imposing presence in the President's tour of the lower Eastern region has lifted the lid on the ongoing 2022 succession plans to market Raila across the country as Uhuru's heir apparent.

Speaking at the Thwake dam where he held an inspection tour on Friday, Uhuru while gesturing at Raila and Kalonzo, said he was happy with the unity he was seeing.

The President's remarks affirmed the succession plans that involve having all the Nasa chiefs work together in one alliance to take on Deputy President William Ruto next year.

A number of Cabinet Secretaries and top government officials hailing from the region are also present.

President Uhuru is said to be keen on having opposition leaders craft a 2022 strategy that will see them field a joint presidential candidate against Ruto.

There are growing fears within the President's camp that Ruto might get a field day in next year's polls if his opponents fail to unite and face him as the common enemy.

Uhuru's lieutenants are now pushing for a single formidable alliance and are seeking to get the nod of other Nasa affiliates other than Raila Odinga's ODM.

Jubilee secretary general Raphael Tuju, a key cog in the President's succession team, confirmed to the Star that plans are afoot to build a big political machine bringing together all the major parties.

“I am not mandated by my colleagues to divulge the details about the discussions that we have had with their parties at this point, but what I can confirm is that we have made a lot of progress in our discussions,” Tuju said on Wednesday.

The Ukambani trip is one in as many trips lined up across the country and where the President is expected to be accompanied by Raila as the handshake partner is being positioned for the heir post.

Uhuru calls for Nasa reunion ahead of Ukambani tour

Uhuru will tour Ukambani region on June 28 and 29.
News
5 months ago

Uhuru to make scaled down tour of Ukambani

New dates to be announced later.
News
4 months ago

Kalonzo: Uhuru didn’t say he will back Nasa candidate

Uhuru on Monday said he will pick his 2022 successor from among the Nasa principals.
News
5 months ago
by JAMES MBAKA AND JULIUS OTIENO
News
09 July 2021 - 13:38