• When asked how he will handle political pressures if he is selected as a commissioner, Osendo said he is aware of the situation and would want to hit the ground early once appointed.

• He also pointed out that the one thing that doesn't seem to work is that political parties have tended to send officers from the party who don't have decision making power. 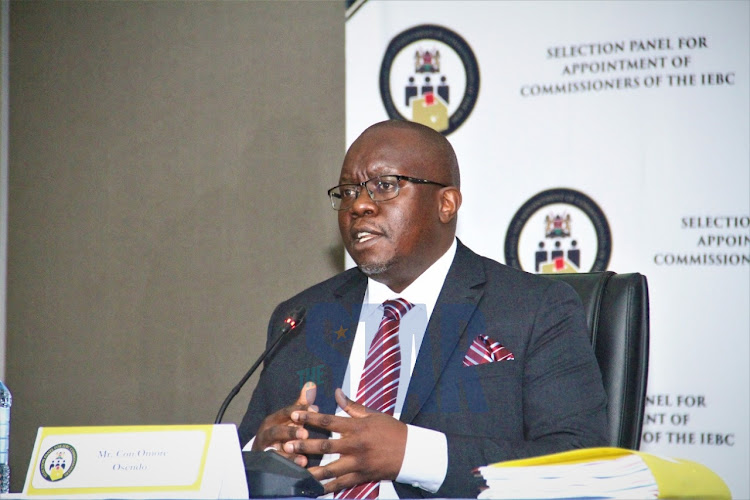 IEBC nominee Con Omore Osendo before the selection panel for appointment of commissioners of IEBC for interview at KICC on July.9th.2021/EZEKIEL AMING'A

The selection for the appointment of Commissioners of the Independent Electoral and Boundaries Commission on Friday entered day three as Con Omore Osendo faced the panel at KICC.

Osendo is a Governance Adviser at the Foreign, Commonwealth and Development Office and has extensive experience is in Public Policy and Governance.

He has 19 years of governance, political economy and public policy experience in Kenya.

When asked how he will handle political pressures if he is selected as a commissioner, Osendo said he is aware of the situation and would want to hit the ground early once appointed.

"'I have seen what commissioners and staff of IEBC go through. I would want to start early by having a very structured and regular engagement with the political class. I know we have a forum for that," Osendo said.

He also pointed out that the one thing that doesn't seem to work is that political parties tend to send officers from the party who don't have decision-making power.

On what he would do in that situation, Osendo said he would still work with that forum.

"But if I realize that we are not getting the decision-makers, I would still find a way within the commission to ensure that we have a periodic engagement with the political class so that the public also sees the commission is engaging with them and include all the other places in making an election successful.

Thirty-six candidates have been shortlisted for the three vacant positions in the commission.

Things took a turn on Wednesday when a candidate for the position of IEBC commissioner withdrew from the race over a forged degree.

Chairperson Dr Elizabeth Muli said the panel wrote to universities and other agencies to seek authenticity of candidates documents and Kenya Methodist University responded saying Abdalla Mohamed had not obtained a degree from the institution as had been alleged.

"On June 28, the selection panel wrote to the Kenya Methodist University seeking verification of Abdalla’s Bachelor’s Degree which he had alleged to have been awarded on July 28, 2007," she said.

The panel received feedback from the university on July 1, 2021, confirming that Abdalla was not awarded the degree and was not a student at the university.

The selection panel for the appointment of commissioners to the IEBC on Thursday was told that youth applying for IDs should be given the option of registering as voters at the same time,

The panel, which was conducting oral interviews on Thursday, heard that registering people as voters when they are applying for IDs would enhance participation in democratic processes.

Caroline Njeri, who is seeking to fill one of the four vacant positions at the electoral agency, said mass registration of voters should be conducted at several intervals within the election cycle, not just before general elections.

Register youth as voters when they apply for IDs, IEBC selection panel told