• The Sports department also irregularly disbursed Sh529.9 million to organisations not registered by the Commissioner of Sports.

• Also queried were payments worth Sh57 million in respect of allowances and bonuses to Harambee Stars players and the technical bench. 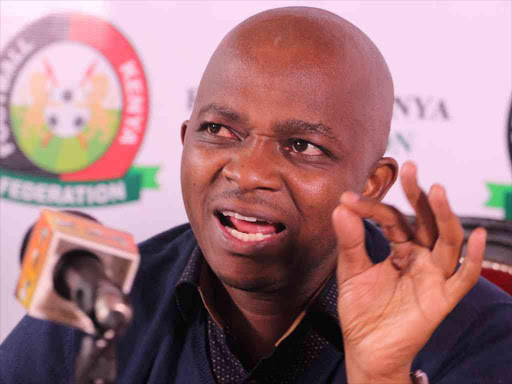 The payments were made to Mwendwa between April 25, 2019 and November 29, 2019, putting on the spot the football federation that is yet to be cleared of the many scandals that have rocked it.

Gathungu said that without the requisite documentation, it was not possible to confirm the validity of amount paid to the federation president.

Also queried were payments worth Sh57 million in allowances and bonuses to Harambee Stars players and the technical bench.

The expenditure for the team that travelled for African Cup of Nations camps in various countries were not supported by approved rates.

“Bank statements and cash books were not presented for audit review to confirm amounts transferred to the bank for payments,” the auditor said.

Gathungu further flagged Sh111.6 million that was approved for disbursement to cater for accommodation and team allowances.

They were incurred by the fund management on behalf of sports federations during the year under review, contrary to the policy guiding such expenditure.

The Sports department also irregularly disbursed Sh529.9 million to organisations that are not registered by the Commissioner of Sports. 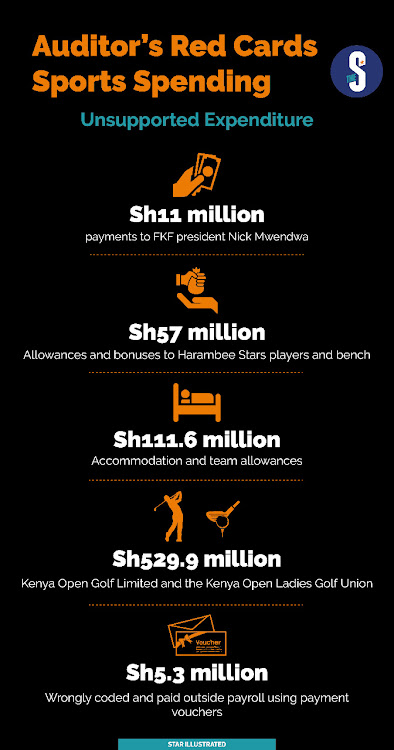 The Kenya Open Golf Ltd is a limited company and had not been registered with the Commissioner of Sports as required to qualify for funding.

KOGL received over Sh250 million, which Gathungu has deemed has having been irregular and not a proper charge to public funds.

Gathungu said the department acted contrary to Section 135 (1) of the Public Procurement and Asset Disposal Act, 2015.

Also queried was Sh6 million paid to the Kenya School of Government, yet there was no document to confirm that such a contract existed between the parties.

Also flagged is some Sh5.3 million that was wrongly coded and paid outside payroll using payment vouchers.

“Consequently, the accuracy and validity of the reported compensation of employees expenditure of Sh187,772,897 could not be ascertained.”

The auditor has also revealed that Sh3.2 million and Sh8 million were irregularly disbursed to the Kenya National Sports Council and Gor Mahia Football Club, respectively.

The expenditures were not supported by confirmations from the recipients.

Gathungu also took issue with an unpaid balance of Sh81,823,065, which was found to be a pending bill that was not disclosed.

In the same vein, the State Department irregularly paid Sh682,192 as arrears of special duty allowance in financial year 2018-19.

However, some of the officers had been called upon to perform duties of posts that were more than two grades higher than their substantive grades.

Others were paid the allowance for more than six months contrary to the provisions of Public Service Commission – Human Resource Policy and Procedures Manual for the Public Service, 2016.

In addition, the State Department was found to have 10 vehicles which were not registered in its name, thereby casting doubts on their ownership.

“In the circumstances, the State Department was in breach of law and it could not be confirmed that the assets had been properly safeguarded,” the auditor said.

The department also failed to explain why it did not remit employee pensions amounting to Sh7,207,329.

The fund did not provide evidence of the existence of unremitted employee pensions, considering that no contract had been signed with the administrator as at June 30, 2020.

“Although, Section 23 of Revised Retirement Benefits Act Regulations, 2017 provides that the funds should earn interest for members, no such evidence was availed for audit review,” Gathungu said.

Sio says he's not guilty, quotes St Luke on not using power and money to extort and falsely accuse the innocent,
News
1 year ago

No joyriders flew to Rio at athletes' expense, court told