SHOT IN THE HEAD 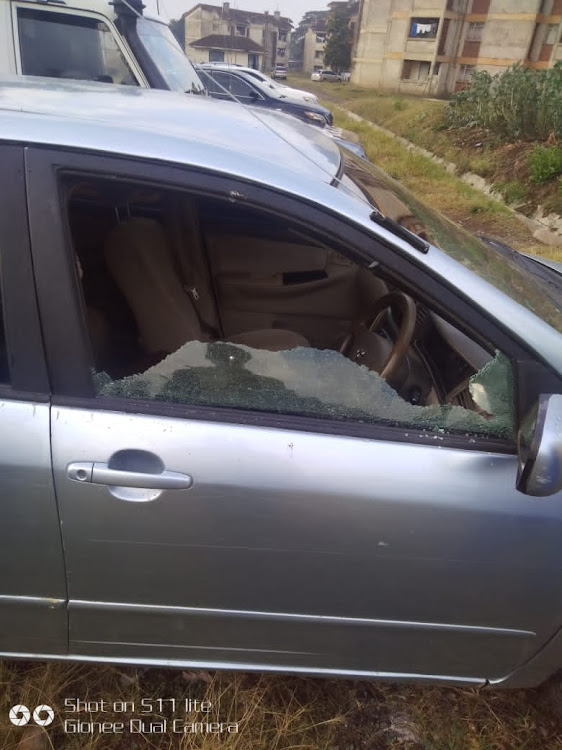 POLICE MURDER The vehicle of a police officer who was found murdered at a parking lot at the Kasarani Police Quarters in Nakuru. His girlfriend has gone missing and her phone is switched off.
Image: LOISE MACHARIA

A police officer was on Monday found murdered inside his car at the Kasarani quarters in Nakuru.

The body of John Obweno, 28, was found inside his car at the parking lot of the police quarters. He was attached to crimes branch at the Nakuru Central police station. Police say blood was oozing from his ears and nose.

Nakuru Town East subcounty police commander Phanton Analo said the bleeding was a sign that he had suffered a gunshot to the head.

Analo said the body was laid back on the driver’s seat and had injuries on the head.

Nakuru Town East deputy county commissioner Joseph Tonui said the officer was shot in the head and a used cartridge left at the scene.

“The assailants broke the driver’s window with a metal bar to access the officer,” he said.

Tonui added that the engine of Obweno's car was still running as he lay dead inside the car.

He said Obweno was last seen with his girlfriend who has since gone missing.

The girlfriend is also a police officer in the rank of a corporal. The administrator said the woman’s phone has also been switched off.

He said police with the help of their colleagues from the Directorate of Criminal Investigations were working to establish the motive of the murder and to arrest the killers.

“The investigators are looking for the girlfriend and have also picked up Obweno’s neighbour for questioning,” he said.

Obweno was described as a dedicated and competent police officer.

His body was taken to Nakuru county mortuary awaiting postmortem.