Nigerian dissident Kanu's family claims he was deported from Kenya

Kanu was apparently detained at JKIA upon arrival from Israel 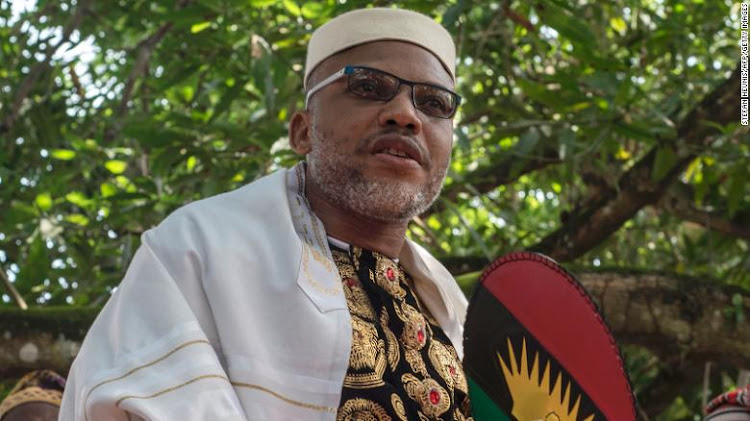 The leader of a group calling for the secession of a part of southeastern Nigeria formerly known as Biafra was arrested and deported from Nairobi, his brother and a group of lawyers have claimed.

Nnamdi Kanu's brother Kingsley called from Germany where he stays and declared the incident extraordinary rendition.

Kanu had apparently arrived in Kenya when he was stopped at the Jomo Kenyatta International Airport on June 26. He was handed over to Nigeria the following day.

He was headed for his house in Kileleshwa when authorities stopped him for questioning. He was settled in Nairobi but was coming from Germany via Israel.

"We will hold Kenyan and Nigerian government responsible for whatever may happen to my brother. We don't know why they did this to him. It is an incident of extraordinary rendition," said Kingsley.

Other officials said they knew Kanu was to stay in Nairobi for sometime when he was detained over an immigration issue.

“He had arrived in Kenya using a British passport ,” said  the senior security official who asked not to be named.

He was later flown to Nigeria the following day. This was after the Nigerian officials in Nairobi confirmed he was wanted back home.

His brother said Kenya knew why Kanu would not go back to Nigeria but handed him to Nigeria.

He said the family is engaging a number of lawyers to know the way forward including suing Kenya. Kingsley added his brother had renounced Nigerian citizenship.

There was no official comment from the Ministry of Interior.

Spokesman for the British High Commission in Nairobi Daniel Johnson said they are yet to know where he was arrested.

"He was not arrested in or extradited from the UK. We are seeking clarification about the circumstances of the arrest from the Nigerian Government. This is the same thing which our High Commission in Abuja have put out," he said.

Kanu spent two years in jail in Nigeria fighting charges of criminal conspiracy and belonging to an illegal organisation, but disappeared after he was released on bail in April 2017.

Since then, Kanu's whereabouts have been unclear, but the government has called his social media posts incendiary amid rising violence and a spate of attacks across southeastern Nigeria.

Kanu appeared in court June 29 and his case was adjourned until July 26 and 27.

Attorney General and Justice Minister Abubakar Malami told state news channel NTA that Kanu was detained on June 27 and "brought back" to Nigeria, but he did not say from where. This happened with the help of Interpol.

"He has been intercepted through the collaborative efforts of the Nigerian intelligence and security services," Malami said.

Kanu was rearrested on Saturday night  by a combined team of Nigerian and foreign security operatives.

The legal practitioners under the auspices of the Coalition of Igbo-British Lawyers condemned the Kenyan Government for arresting the leader of the Indigenous People of Biafra, who is also a British citizen, and handing him over to the Nigerian government.

The group revealed this in a statement signed by Barrister Ebuka Okoroafor.

According to the lawyers, the Kenyan government violated the human rights of Kanu, who possesses both Nigerian and British passports.

“Coalition of Igbo-British lawyers condemns the illegal detention and subsequent handing over of the leader of the Indigenous People of Biafra, Mazi Nnamdi Kanu to the Nigerian government by the Kenyan Government.

“It is worthy of note to mention that Mazi Nnamdi Kanu entered Kenya with his British passport, and the Kenyan government is fully aware of his citizenship status but still went ahead to perpetrate their illegal act which does not only breach the personal human rights of Mazi Nnamdi Kanu but also undermine the sovereignty of the British government,” the statement read in part.

The group also disclosed that the action will be addressed at the International Criminal Court, in Hague, The Netherlands, while asking the Nigerian government to convey Kanu back to the United Kingdom before the expiration of 48 hours.

“While this serves as a pre-action notice to the Kenyan Government as we shall be heading to the International Criminal Court to rectify the injustice done as it is trite law that injustice to one is injustice to all, we are also by this medium informing the Nigerian Government that they have 48 hours to return Mazi Nnamdi Kanu to the United Kingdom.”

Kanu’s movement, the Indigenous People of Biafra (Ipob), has been labelled as a terrorist organisation by the Nigerian authorities.

He was initially held in 2015 on treason charges but then fled the country in 2017 while on bail.

Kanu is a popular figure who has been a thorn in the side of Nigerian authorities since 2009.

He used his Radio Biafra station, which broadcasts from London, to call for an independent state for Igbo people.

His arrest in 2015 triggered massive protests by his supporters in south-east Nigeria.

Kanu founded Ipob in 2014 - the latest group advocating for a country for Nigeria's Igbos.

In 1967 Igbo leaders declared independence for the state of Biafra, but after a civil war, which led to the deaths of up to a million people, the secessionist rebellion was defeated.

But the idea of Biafra has never gone away and despite arrests of his members, Kanu's movement has seen a recent swell in its numbers.

Ipob established an armed wing - the Eastern Security Network (ESN) last year - and the authorities say the group has been responsible for a number of attacks on police stations and other public properties in southern Nigeria.

Last month he tweeted about the security issues in south-east Nigeria and said "those misbehaving today" would be dealt with in "the language they will understand".

The tweet was removed by Twitter for violating its rules after Buhari faced backlash, leading to a suspension of the micro-blogging site in Nigeria.

The president, during a recent TV interview, also referred to Ipob as a "dot in a circle" that can easily be crushed.

He was criticised by many Igbo leaders who felt he was referring to people of the Igbo ethnic group and not just Ipob.

POB leaders have called for the secession of the southeastern region, which tried to secede from Nigeria in 1967 under the name of Republic of Biafra, triggering a three-year civil war in which more than a million people died, mostly from starvation.

In May, police launched an operation in southeast Nigeria to quell the rising violence and crime, triggering fears of a return to war.