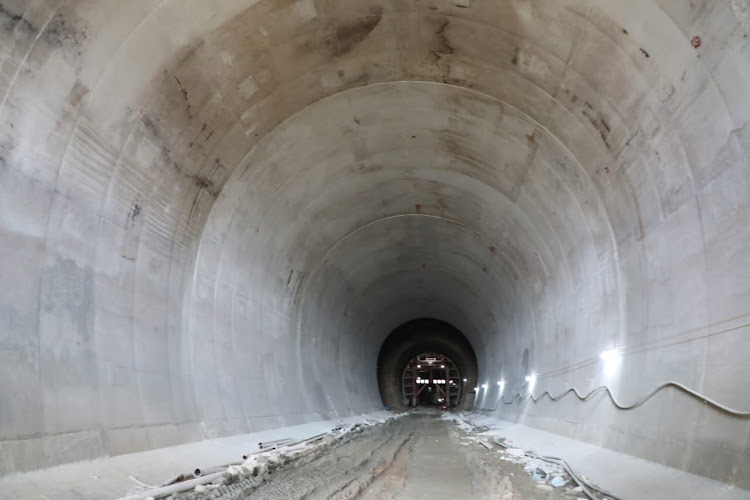 UNFIT FOR CONSUMPTION: A completed tunnel at the Thwake multipurpose dam in Makueni on Wednesday, March 17.
Image: VERONICA NTHAKYO

Details have emerged showing that the Sh82 billion Thwake Dam may turn out as a white elephant over water quality concerns.

Auditor general Nancy Gathungu has sounded the alarm that the Water ministry has not taken corrective measures to ensure water draining into the dam is safe.

She argues that the dam’s main supply will be Athi River whose main tributary is the Nairobi River – which studies have revealed to be polluted with heavy metals.

Approximately two million people from Lower Eastern are gearing up to use the dam to end their water woes dating to the pre-independence era.

But the auditor is concerned that several studies have concluded that Nairobi River water is unfit for human consumption, and hence not even suitable for growing crops.

Regional leaders have been pushing for completion of the Thwake Multipurpose Dam whose works are at 46 per cent.

The auditor’s concerns are likely to deal a blow to President Uhuru Kenyatta’s administration which has been positioning the dam as its mega project for Eastern region.

The dam, which is being constructed downstream from Thwake and Athi rivers, is set to straddle 10 kilometres to create a lake reservoir of over 690 million cubic meters.

It would be the main source of water for Kitui, Makueni and Machakos counties and the main supply to the upcoming Konza city.

Gathungu, in a review of the projects’ progress, said there was no evidence of efforts by the implementing agency to ensure the river will be free from pollutants.

She said there were no pointers that the ministry has put mechanisms to ensure that the river’s water is fit for human consumption before the dam is completed in November 2022.

“Consequently, in absence of any mitigation efforts to avert the pollution, the water and the food crops to be grown under irrigation in the proposed dam may not be fit for human consumption,” the auditor said.

In her latest report on the African Development Bank-funded project accounts, Gathungu said the program’s objective may not be achieved in the circumstances.

The ESIA states that the Thwake dam location will be faced with residual faecal and organic matter from pit latrine, graveyards and waste holding sites from the displaced homesteads and social locations.

It states that the situation would particularly impact the health of the consumers and their animals that would rely on the water.

“Nutrients (nitrogen and phosphorous) are expected from the geological emissions, organic decompositions and surface runoff discharges from settlement areas and markets around the dam.”

“This could create the potential for eutrophication of the dam water hence complicating treatment of the water,” the report reads.

The experts report further shows that the situation would create low pH scenarios hence other heavy metals are likely to be released into the water effectively changing the water quality.

“Implications on water quality would be felt by the water consumers in the immediate location of the dam as well as dependents of Athi River downstream in terms of habitat pollution, people’s health and cost of water treatment at various stages,” the report reads.

Tanathi Water Services Board is the procuring entity. Tanathi MD Fredrick Mwamati told the Star the parent ministry is charged with dealing with the audit concerns.

Gathungu has also cast doubt on whether the government will secure funding for the project’s remaining three phases.

She cited the case where funding to the tune of Sh39.8 billion in respect to the remaining three phases is yet to be secured, planned or sought from financiers.

“Consequently, it is not clear how the three phases will be financed in the ensuing period towards the project completion,” the report reads.

The African Development Bank and the government secured Sh42.4 billion for phase I of the project.

Gathungu flagged instances of delayed compensation by the National Land Commission to the affected persons, causing an under-expenditure of Sh550 million.

Also queried is the irregular variation of contract for the supply of motor vehicles by Sh37 million above the contract sum of Sh135.8 million which is three per cent above the allowable 25 per cent.

The contractor was to supply 10 Toyota Landcruisers, and 15 Toyota Hilux for the employer and the engineer but changed the specifications midway.

Gathungu said the management was in breach of the law as there was no evidence that the changes in specifications were duly approved.

She added that there was no explanation on why the specifications were not included in the tender documents at the bidding stage.

The Public Procurement and Assets Disposal Act, 2015, provide that an amendment or a variation to a contract is effective only if the variation or amendment has been approved in writing.

The auditor also raised concerns that the contractor has failed to construct temporary site offices but instead bought IT assets at Sh22 million and leased a building for the engineer and Tanathi.

Gathungu said the program may thus incur cost overruns, arising from the changes thereby leading to wastage of public resources over the project period.

Further concerns are that the contractor had carried out substantial excavation works on the main spillway yet the design was yet to be tested.

This was owing to the contractor’s failure to procure a physical hydraulic model test, with the auditor warning that this may cause possible delays in concrete works for the main spillway.

The auditor is also concerned that the project’s vehicles are fitted with private number plates, are not branded and do not bear any program identification.

Gathungu said there was the risk of misuse of the motor vehicles and other program’s assets or the same being employed to activities other than those designated by the program.

Clean water for animals, remedy in realization of food security

Animals take in more water daily than feed, after all.
News
1 year ago

Why water sources should be protected

Only 0.5 per cent of fresh water is available for consumption
News
1 year ago
by MOSES ODHIAMBO Journalist and Political Writer
News
28 June 2021 - 23:00