NOT FREE JUST YET

• However, in June last year the DPP filed an appeal against the acquittal of Kimunya and his two co-accused saying the court erred in law by setting them free.

• The alleged transfer of 25 acres to Midlands is said to have happened on June 30, 2005, when he was the Minister. 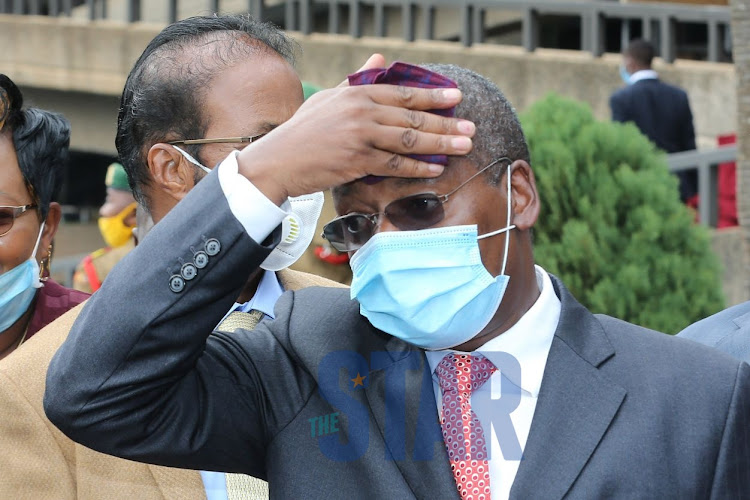 National Assembly Majority Leader Amos Kimunya is not off the hook yet in his fraud case following an appeal that was filed by the DPP against his acquittal.

Anti-Corruption Magistrate Felix Kombo acquitted Kimunya in May last year ruling that the prosecution had not made out a prima facie case against him in his Sh60 million fraud case.

However, in June last year the DPP filed an appeal against the acquittal of Kimunya and his two co-accused saying the court erred in law by setting them free.

In the case, the Former Minister for Lands had been charged in connection to a land fraud where he is said to have illegally allocated public land to his company.

The alleged transfer of 25 acres to Midlands is said to have happened on June 30, 2005, when he was the Minister.

Kimunya, then Director of Land Adjudication and Settlement Lilian Wangiiri Njenga and businessman Junghae Wainaina were in 2014 charged with allocating public land to Midlands Limited, a company associated with the legislator.

Kimunya, Njenga and Wainaina were accused of abuse of office, failure to disclose private interest and fraudulent disposal of public property.

Kimunya and Njenga had in June 2005 allegedly used their offices to allocate to Midlands 25 acres of public land worth Sh60 million in Njabini, Nyandarua county.

But, Kombo set them free ruling that they had no case to answer which led the DPP to file the appeal.

According to papers filed in court the prosecution argues that the lower court erred in law and fact in finding that the settlement Trust Fund referred as Settlement Trust was the complainant and not the Ministry of Agriculture.

The prosecution further argues that magistrate erred in finding that it had not made out a prima facie case against Kimunya and his co accused persons.

The DPP has also faulted the court for ruling that count number two in the charge sheet was defective.

The prosecution has also argued that the court erred in law by acquitting Kimunya and the other two accused persons under section 210 of the criminal procedure code.

Kimunya had been charged with abuse of office and fraudulently disposing public land but he was discharged by the court on all the counts.

The legislator is yet to file any responses to the DPP’s appeal that was filed over a year ago at the high court.

The case will be mentioned on July 12 for further directions.