• The Star has learnt that top Kanu echelons are about to complete negotiations with Raila’s men. 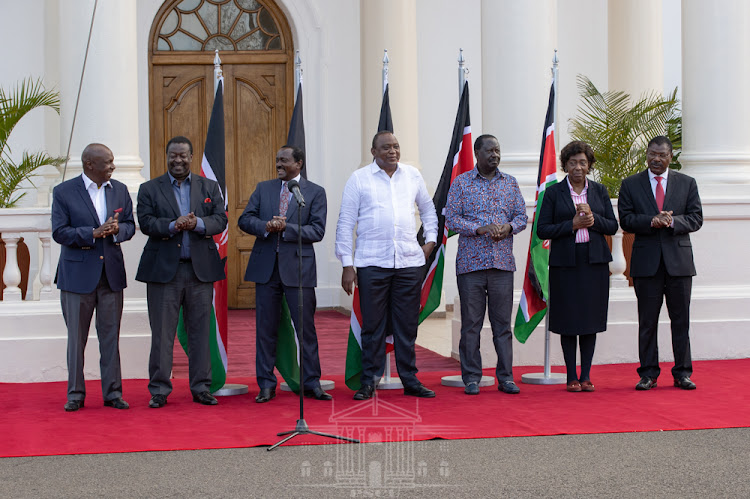 Kanu chairman Gideon Moi has decamped from the One Kenya Alliance and is reportedly crafting a 2022 coalition with ODM leader Raila Odinga.

The Star has learnt that Kanu bigwigs have agreed to rally behind Raila, a move likely to jolt the amorphous One Kenya Alliance. Pundits had speculated that the alliance had President Uhuru Kenyatta’s blessings.

Gideon made the move on the advice of the President, an indication that Uhuru has settled on Raila as his preferred candidate to face off with Deputy President William Ruto in the 2022 polls.

The signing of a pre-election coalition between ODM and Jubilee was the clearest signal that something big was afoot.

During the President’s visit to Nyanza early this month, he said his handshake with Raila is a long term engagement that will go into the future.

“When the President finally makes his choice known, we want to be within the circles and as a party; we have studied the dynamics and we can see where to bet for 2022,” a top Kanu official confided to the Star.

Gideon abandoned OKA as the other principals in the coalition– Kalonzo Musyoka (Wiper), Musalia Mudavadi (ANC) and Moses Wetang'ula (Ford Kenya) – insisted the group is intact.

“We shall be part and parcel of the President’s succession plan. But what is important is that we must first align our party the best way through collaborations with other like-minded parties like ODM,” a senior Kanu official who sought anonymity said.

Gideon snubbed a meeting attended by the three OKAprincipals last week on Tuesday in Nairobi. The trio later said in a statement that they met as Nasa and not OKA leaders, perhaps to downplay Gideon's absence.

“They [Kalonzo, Mudavadi and Wetang'ula] resolved to issue a comprehensive statement on the state of Nasa in due course,” the press statement said.

The development could throw Musalia and Kalonzo's presidential bids into jeopardy. The two have insisted they will not rally behind Raila again as a presidential candidate.

On Saturday, Raila said that the formation of a heavy political machine is in the works. The formation, which he said will transform into a “tsunami”, will sweep the country in next year’s general election.

“There is a strong wind coming. It is heavy. It will turn into a tsunami. That is why I want our people to know that we know where we are going.”

“We want our people to know that the machine we are making is a heavy one. You see others chest-thumping, they are passing wind,” he added.

On Sunday, ODM’s secretary of political affairs and Ugunja MP Opiyo Wandayi said the party was reaching out to all like-minded formations for an alliance ahead of the elections.

“We are in talks with every like-minded person and we are preparing for 2022 even as we wait for BBI to be concluded,” he said.

Wiper national vice chairperson Mutula Kilonzo termed the report that Gideon has changed camp as rumours, adding that OKA principals have a meeting Tuesday to discuss the future of the coalition.

“It will be good to wait and see if he (Gideon) attends the meeting. Otherwise, all doors are still open. Nasa can be revived but that will depend on how ODM agrees with Jubilee.

"If ODM teams up with Jubilee, which is in coalition with Kanu, then definitely Kanu and ODM will be in one camp,” the Makueni senator said.

“We want to expand OKA and bring on board as many people as possible for the formation to have a national image. In essence, Raila also wants to be part of OKA,” Savula said.

Gideon’s departure comes in the wake of a sustained push by Kitui Governor Charity Ngilu to have the Nasa principals reunite and face the DP as a unit.

Ngilu, a seasoned politician, has argued that the only way to beat Ruto is for the Nasa chiefs and Gideon to come together.

“I told them that individually they will be hanged separately. For that, it is good if they come together as they used to be so that we can form the next government,” she said recently.

Kalonzo and Mudavadi have rubbished reports that they were planning to reunite with Raila under the Nasa umbrella.

“I will be the most stupid fellow on earth to support, for the third time, a presidential candidate without a measure of reciprocity,” Kalonzo said during an interview with NTV mid this month.

Kalonzo was Raila’s running mate in 2013 under the Cord coalition and in 2017 under Nasa.

He has blamed ODM for the collapse of the National Super Alliance, insisting that it will take a miracle to rebuild the coalition.

“When you are walking a beaten trail and you know the pitfalls, the insincerity, bad mouthing and bad faith, you rather think very strategically. So, for us, One Kenya Alliance is ready to take off,” he said.

At the weekend, the Wiper leader was forced to fight off claims by a member of his party – Mavoko MP Patrick Makau – that he was considering teaming with Ruto’s United Democratic Alliance ahead of the polls.

“Ruto is my political challenger in 2022 and I'm ready to face him. We don’t share any political ideology with the UDA,” Kalonzo said.

Mudavadi has also dismissed claims that there are talks for the revival of Nasa, maintaining that the reports are a “distortion of issues.”

The ANC leader has ruled out working with his ODM counterpart saying he cannot trust Raila. “We have a very serious deficit of trust in Nasa. In fact, maybe it is irredeemable,” Mudavadi said.

He accused Raila of creating a false narrative around the possibility of Nasa coming back together ahead of the August 2022 polls.

“Leaders should stop sending conflicting signals and messages. When you send conflicting messages, you discourage people,” he said during a tour of the Coast mid this month.