•The talks between ODM and President Uhuru Kenyatta’s Jubilee had sparked concerns NASA coalition would be buried completely.

• Musalia, Kalonzo, and Wetangula on Tuesday held a two-hour meeting in Nairobi to discuss their political future. 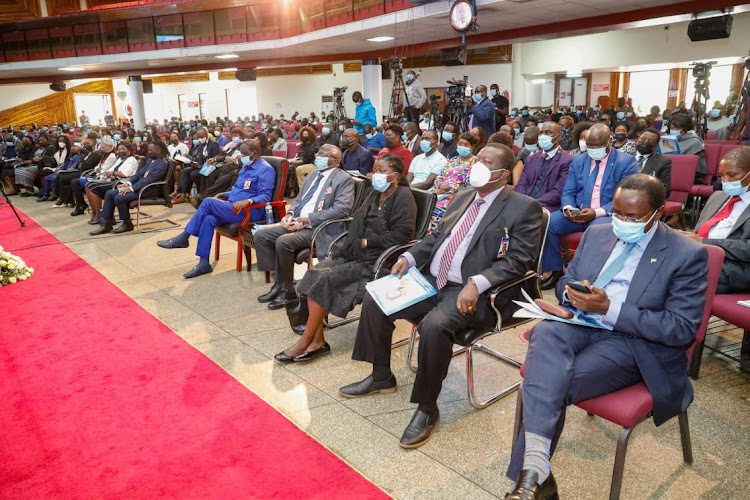 ODM leader Raila Odinga on Thursday appealed to Nasa leaders to reunite for the 2022 General Elections.

Speaking for the first time about the future of Nasa, Raila said the quartet of Kalonzo Musyoka, Musalia Mudavadi, Moses Wetang'ula and himself need to work together to move the country forward.

He was speaking during a service for former Gem MP Jakoyo Midiwo who died last week. The service was held at Citam church along Valley Road in Nairobi.

Both Musalia and Kalonzo were present.

Raila said it was important for the leaders to put aside their ethnic origins and unite for the benefit of Kenya.

His ODM party is already in alliance talks with President Uhuru Kenyatta's Jubilee.

Raila delivered the President's condolences. He said Uhuru could not attend the prayers as he was busy at the launch of the safari rally that made a return to Kenya after 19 years.

He asked Kenyans to borrow a leaf from Midiwo, describing the fallen leader as “a true Kenyan who had a clear vision as to what Kenya should be.”

“Midiwo could express himself emotionally. He was not to be pushed back. It is in our genes. You can trace it back to our parents and grandparents,” Raila said.

The talks between ODM and President Uhuru Kenyatta’s Jubilee had sparked concerns that the largely moribund Nasa will die altogether.

Musalia, Kalonzo, and Wetangula on Tuesday held a two-hour meeting in Nairobi to discuss their political future.

Speeches by Raila, Musalia and Kalonzo at the Jakoyo prayers pointed to a concerted effort by the Opposition team to remain united.

Musalia restated the need for the coalition partners to trust one another in order to find solutions to the problems bedevilling Kenyans.

“As we move forward, let us work together, build bridges and underpin everything we do with trust and I am sure good solutions will be found for Kenyans,” theN ANC leader said.

He said Kenya belongs to all citizens hence all leaders have a duty to protect the interests of the country.

“We must all protect it; seek to have good governance, fairness, an economy that works for all. These are the things that I believe Jakoyo cherished,” he said.

He said it was prudent for Kenyans to draw lessons from Jokoyo's life and times.

“We will reflect on the moments we had with him and I am sure we shall draw lessons from him,” Musalia said.

Jakoyo was hailed for having had no bounds in friendships.

Kalonzo pledged that the Nasa principals will strive to work together. He called on his counterparts to continue building broken bridges.

The former vice president said they hope the Court of Appeal will deliver favourable ruling on the BBI case. The case will be heard from Tuesday next week.

“Let’s wait for the outcome of the process before the Court of Appeal. Let us hope that justice will prevail and the reform process for the good of this country will continue. I think these are the higher ideals,” Kalonzo said.

Several leaders who were present urged the principals to work together to deliver the Canaan promise.

Makadara MP George Aladwa ignited the talk in his tribute.

“I implore upon Kalonzo and Musalia that if you take your brother to marry and find that the girl has gone abroad to study, and the girl comes back, you must go back and take him to ensure that the girl is married,” Gem MP Elisha Odhiambo said.

Siaya Senator James Orengo said, “I want to plead that this is the time to bring the country together. There will be no other time.”

“If Kenya is not brought together at this time and we begin together as one country under God, it will be very difficult to do it on another day. Jakoyo, having brought us together today, his spirit will guide us to come together," Orengo added.

"We have our leaders here – Raila, Kalonzo, and Musalia. We are in your hands. Do something,” ODM chairman John Mbadi said.

“Raila, Mudavadi, and Kalonzo, we are asking you to sit together and give us a leader who will steer the country,” Nduati said.

Mudavadi, Kalonzo and Weta to consult on Nasa revival

Move comes hot on the heels of a plan by ODM to enter into coalition with Jubilee.
News
1 year ago