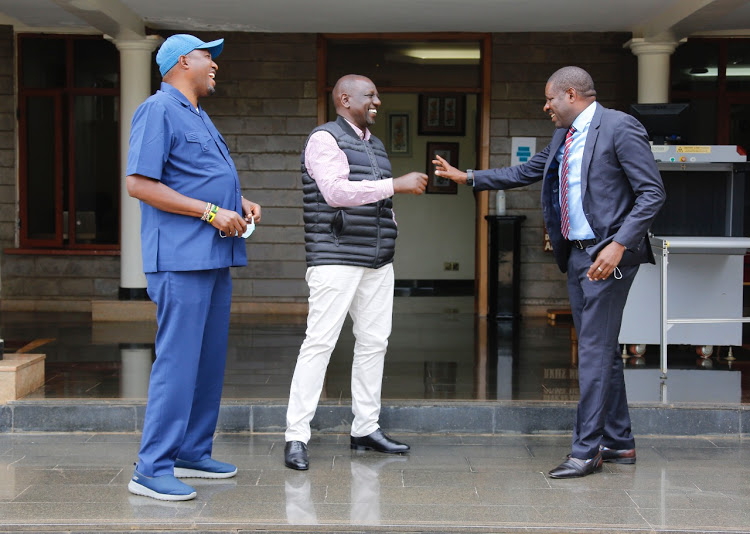 The dismissal comes even as it emerged that the President's confidants held a crisis meeting on Thursday to evaluate the impact of recent defections from Uhuru's camp.

Despite the daring raids in Uhuru's Central Kenya turf by his deputy, the pro-handshake troops remain buoyant that the impending alliance between Jubilee and ODM will vanquish Ruto's momentum in the fullness of time.

On Thursday, Jubilee secretary-general Raphael Tuju said the leaders from Mt Kenya who are ditching Uhuru's camp are inconsequential and will not affect the ODM-Jubilee alliance plans.

Tuju told the Star on the phone that most of the leaders decamping to the hustler movement were doing so after sensing defeat in next year's general election.

“The alliance talks are going on smoothly and as planned,” Tuju said.

Tuju is also a Cabinet Secretary without portfolio and a close Uhuru confidant. 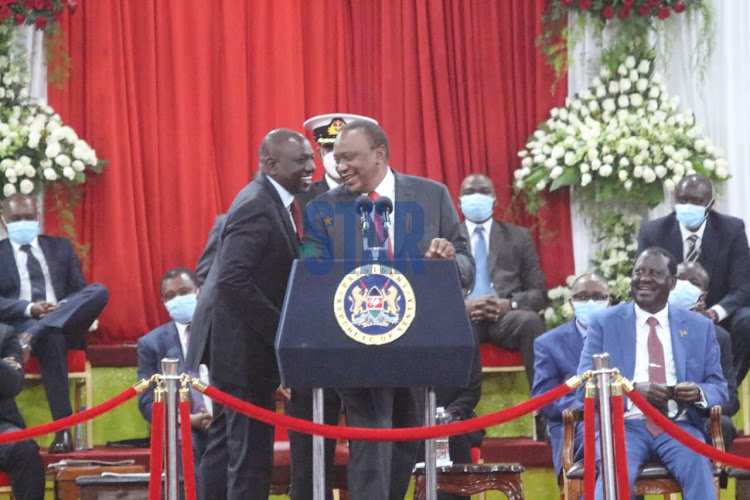 When asked about the Thursday meeting, he said the session largely dwelt on the ongoing discussions about the ODM-Jubilee alliance.

“For your information, we met this morning (Thursday) to continue with the same. Those who want to go should go,” Tuju said.

He said the Jubilee Party will change its nomination procedures to weed out politicians who can easily be swayed by "some hits of the moment.”

“As a party, we have resolved that we will be subjecting our aspirants to thorough checks so that we can have leaders who can stand firm,” he said.

Confidants of both Uhuru and his handshake partner Raila Odinga are working out a political deal that will culminate in Jubilee and ODM entering an alliance.

However, there are concerns that the Jubilee Party could be hit by a mass exodus of members, a phenomenon that could puncture the push for a pact between the two parties.

There are fears that the decline of Jubilee could force key members and aspirants eyeing various political seats to switch to rival parties in a massive haemorrhage in the ruling outfit.

But Nyeri Town MP Wambugu Ngunjiri said those decamping were doing so for selfish interests and not necessarily because the ground is shifting to Ruto's camp.

“No one should try to imagine that Uhuru who has strategised and won two elections will just sit there without a plan. That would be illogical to even think about. The President has an elaborate plan,” Ngunjiri said.

The lawmaker who is the pioneer of the Kieleweke faction of Jubilee that supports the President and the handshake insisted that the defections are reactionary moves by politicians who have panicked.

“What is happening is that they are looking for personal survival and not being against the President or the handshake,” he said.

Githunguri MP Gabriel Kago is also among those who have recently decamped to Tangatanga.

Wamuchomba who met Ruto on Wednesday said her move was informed by the shifting ground which she said is supporting the DP's hustler movement.

The defections have exposed the emerging political dynamics that could force Uhuru and Raila back to the drawing board as they craft an alliance.

The Uhuru-Raila talks have been likened to the historic Kanu and National Development Party merger in the lead-up to the 2002 General Election that later triggered a bitter fallout.

“It is only the President, Murathe and Tuju that are still in Jubilee. Members left a long time ago not because they wanted to but because they were chased away,” Kihara told the Star.

She added, "ODM will just be entering an alliance with space, very insignificant to say the least."

Gitau last month lead a strong campaign for the UDA candidate in Rurii ward. She said more MPs were still holding on to Jubilee Party for fear of reprisals. "They will decamp in the coming days."

“The writings were on the wall that Jubilee was headed to the grave from the time they refused to organise meetings for members, when they removed leaders from committees in Parliament,” Gitau said.

Analysts opine that besides facing serious threats of a mass walkout, Jubilee will also have to contend with an onslaught from fringe parties in Mt Kenya.

The Service Party headed by former Agriculture CS Mwangi Kiunjuri for instance has bagged former governors, MPs, senators and MCAs who have declared they will run in 2022 on its ticket.

The party has joined forces with the United Democratic Alliance to vanquish  Jubilee in the Kiambaa parliamentary by-election scheduled for July 15.

On Friday last week, Nakuru Governor Lee Kinyanjui, another key figure in Uhuru’s camp expressed reservations in the manner in which the planned ODM-Jubilee alliance was arrived at.

The governor told the Star in a phone interview that party structures were not followed in arriving at the decision.

“As a staunch member, we have watched with dismay a party we believe in being hijacked by a few people with total disregard for members. This only further complicates the situation,” Kinyanjui said.