Family appeals to Chief Justice Martha Koome to help expedite the case that is likely to start afresh.

• Paul Kinuthia said he is frail and does not see justice being delivered any time soon.

• Kinuthia took journalists to the place his son was laid to rest five years ago, accompanied by his wife Elizabeth. Both cried.

The father of murdered lawyer Willie Kimani says he is likely going to die before he gets justice for the death of his son.

Kimani was murdered alongside his client Josephat Mwenda and driver Joseph Muiruri five years ago. Their bodies were dumped in Ol Donyo Sabuk River.

Speaking to the Star in Kikuyu, Kiambu, on the day the family marked the anniversary on Wednesday, Paul Kinuthia said he is frail and does not see justice being delivered any time soon.

“A day like today, to tell you the truth, I am not well physically. Does the government want me to die before getting justice for my son?” Kinuthia asked.

An emotional Kinuthia said at 81 years, his body is weak due to his illness.

“One day I might go to sleep on this chair and never wake up. That will be the end of me,” he said.

Kinuthia took journalists to the place his son was laid to rest five years ago, accompanied by his wife Elizabeth. Both cried at the graveside.

The death of their son is still very fresh to them like it happened just yesterday.

Kinuthia says every time he sees his son's picture on the grave it brings back fresh memories of him.

“As you saw, my son’s grave is in the shamba right outside my house but I don’t go there. I don’t want to see his face. Seeing his grave reminds me of the painful death of my beloved last born son,” he sobbed.

The dad says on the day Willie was abducted, before he left home he asked him if he (father) had medicine, which he (Kimani) promised to buy when on coming back from work.

“I got high blood pressure on the day I received the news that my son’s body had been retrieved from the Ol Donyo Sabuk River in a sack. Since then, I have never been the same,” he said.

Willie was their only hope and his death robbed the family of their sole breadwinner.

“Since he left, things have really changed in this homestead, you can see for yourselves how we are living,” Kinuthia said.

Willie took care of his mother and she was comfortable but now she is also suffering, adding that they don’t have anything

“My heart yearns for justice. I long for the day I will hear that the accused persons in that case have been jailed,” he said.

Kinuthia says hearing the news that the murder case might start afresh was like opening old wounds that had begun to heal.

“My plea to the Chief Justice is to expedite the case so that those who killed my son are jailed. I want their parents to feel what I am feeling in my heart,” he said.

He said that the case should be concluded as soon as possible so that his heart and mind can finally be at peace.

“I just beseech Chief Justice Martha Koome to order Justice Jessie Lessit to conclude our matter before she is taken to Mombasa,” Kinuthia said. 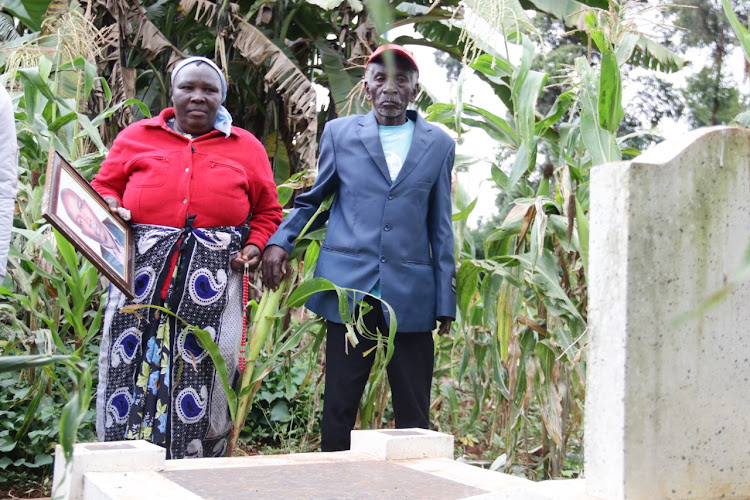 Wanjiku said the last five years have been really hard for the family.

When he died, he left her with two children, one aged four.

“When Willie was alive my first born would take slippers to his dad at the door when he came home from work. So when he died the son would still take the slippers outside waiting for the dad to come,” she said.

That used to make her very sad, which led her to sit him down after a few years when he was a bit older and explain that the father had gone to heaven.

However, the second son never got to know the father as he was just an infant when Willie died but she has shown him pictures of him.

Wanjiku luckily got a job and now has to work hard to take care of the family.

She said she misses him so much. As they marked five years since his death, all she wants is for the court to give them justice.

She feels that with Justice Lessit being transferred to another county, it’s going to affect the case and it might drag on further.

Wanjiku said starting the process all over again, having to recall witnesses and evidence will take time.

The three victims were normal young men who had gone for a court case when they were brutally murdered.

“Even if getting justice won’t bring Willie and the other two victims back to us, it will serve as a source of comfort that what he stood for was not in vain,” she said.