Three arrested in possession of illegal bush meat in Galana

Animals targeted by the hunters include gazelles, giraffes, dik-diks and guinea fowls.

•Bulle said the three suspects will be arraigned at Voi law courts on Monday to face charges of illegal possession of bush meat. 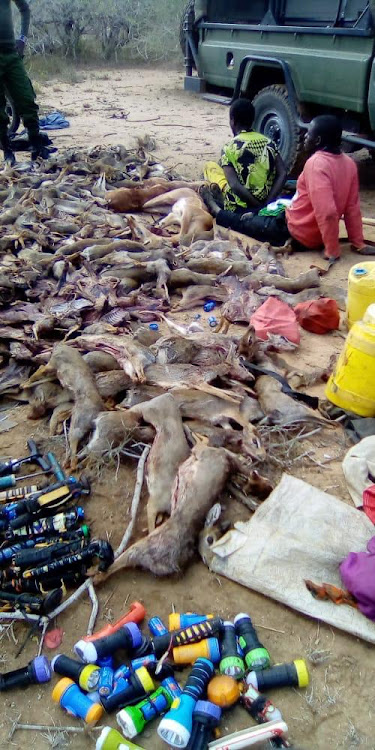 Bulle said the three suspects will be arraigned at Voi law courts on Monday to face charges of illegal possession of bush meat.

"This is the most current occurrence and it is very demoralizing. The motive behind the illegal poaching being for commercial interest as those living in the area are naturally hunters and gatherers," he said.

He also added that there is need for increased mass education to put an end enormous loss of wildlife as those animals belong to not just them but future generations.

"They should know the animals are there for the long run and that they belong to not just them, but the generations to come," he said.

The suspects are held at Voi police station.

Last month, three suspects were arrested and taken to court over a similar incident of possession of illegal meat.

"The harvests occur mainly at night. Once a big torched is pointed in their eyes, they can’t move and that explains the many animals poached,” Bulle noted.