Said qualifications restrictions only allow 1% of Kenyans to run for political positions.

• Elgeyo Marakwet senator Kipchumba Murkomen has drafted a bill to amend the Section 22 of the Elections Act to remove the condition that could dim political careers of many aspirants.

• The Elections (Amendment) Bill, 2021 will be introduced in the Senate for first read next month when the lawmakers resume plenary sessions after a month long recess. 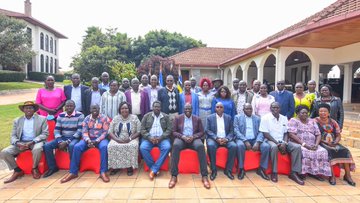 Deputy President William Ruto has broken his silence regarding the ongoing debate about the requirement for MCAs to have a degree in order to vie for the post.

Ruto said that requiring MCAs, governors, MPs, and the president have the same qualification of a Bachelor’s degree is not reasonable, hence, the need to make an amendment to the Act.

Section 22 of the Elections Act, 2011 requires all candidates vying for Parliamentary and County Assembly positions to hold a Bachelor’s degree.

However, Ruto said that it is time that "unreasonable restrictions" be eliminated on the way of voters and candidates to be able to vote or vie in any election or referendum.

“Parliament is already reconsidering Section 22 of the Elections Act so that we can remove what the law provides today that in my opinion, is an unreasonable restriction on the way of people who want to be elected in various office so that we can have a reasonable expectation,” Ruto said.

The DP spoke on Thursday at his Karen residential home during a meeting with MCAs from Baringo County Baringo led by Speaker David Kiplagat Kerich.

Ruto's ally Elgeyo Marakwet Senator Kipchumba Murkomen has drafted a bill to amend the Section 22 of the Elections Act to remove the condition that could dim political careers of many aspirants.

The Elections (Amendment) Bill, 2021 will be introduced in the Senate for first read next month when the lawmakers resume plenary sessions after a month long recess.

Ruto further noted that it was unnecessary to demand uniform qualifications from leaders running for different elective positions in the country.

“Different leaders at different ranks are charged with different responsibilities, and faced with a variety of situations which Parliament, in exercising its legislative authority, must take into account,” he said.

According to the DP, the qualifications restrictions only allow a small percentage of the population to run for political positions and leave the rest disenfranchised.

Ruto’s comments come as Elgeyo Marakwet Senator Kipchumba Murkomen moves to propose the amendment of Section 22 of the Elections Act, 2011.

In a motion tabled before the Senate on Thursday, June 17, Murkomen opposed the “discrimination” of candidates based on their academic qualification, noting that all candidates should be allowed to vie for the above positions as long as they can read and write.

“The provision as contained in the Elections Act is not only restrictive but discriminates against persons who may not have a degree as it implies that only persons who have a degree have the capacity to serve in public office,” Murkomen stated.

Murkomen’s Bill seeks to amend the Elections Act (No. 24 of 2011) to remove the requirement for a person vying for nomination as a candidate to hold a degree and only require them to have the capacity to read and write in English and Kiswahili.

Murkomen has also proposed that;

“Section 22 of the Elections Act is amended in subsection (1) by deleting paragraph (b) and substituting therefor the following new paragraph – (b) is able to read and write in the English or Kiswahili language or, in the case of a person who is deaf or hard of hearing, is literate in the Kenya sign language.”

The amendment is premised on Article 38(3) of the Constitution, which provides that “every adult citizen has a right, without unreasonable restrictions, to be registered as a voter, to vote by secret ballot in any election or the referendum, and to be a candidate for public office or office within a political party of which the citizen is a member and elected, to hold office”.