Remarks reinforce those made by Kalonzo and Raila who on Saturday hinted at reviving the National Super Alliance.

• Raila and Nasa chiefs had declared the coalition dead.

• The remarks by Uhuru give impetus to Nasa's revamp ahead of next year's polls. 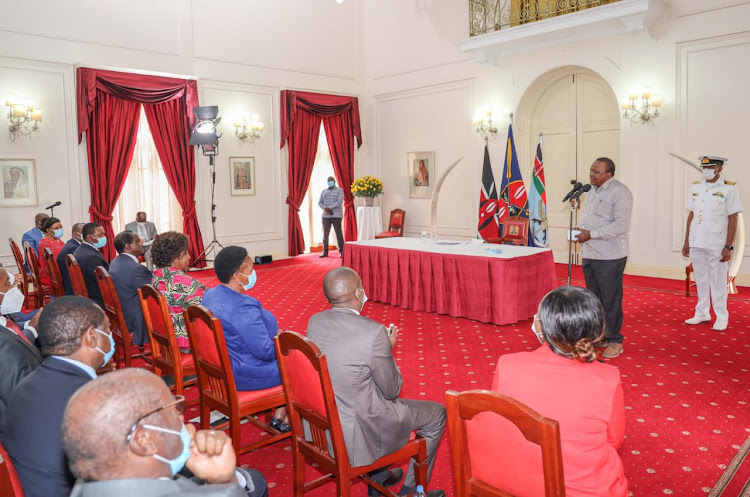 President Uhuru Kenyatta yesterday declared that he will pick his 2022 successor from among the Nasa principals if they unite and agree on a single candidate.

For the first time, Uhuru challenged the Nasa principals to unite to enhance their chances of forming the next government after he retires next year.

The declaration knocks off Deputy President William Ruto from Uhuru's succession matrix. It was in fact the unequivocal sign Uhuru will campaign against the second in command.

The two are not seeing eye to eye and the President has numerously given signals that he was politically done with Ruto.

Former Bomet Governor Isaac Rutto, through his Chama Cha Mashinani, was also part of the alliance but has since joined the Ruto camp.

Speaking at State House, Nairobi, where he held talks with elected leaders from Ukambani region, Uhuru said the unity of the Nasa chiefs will determine if they will form the next government.

“Steve (Kalonzo), listen to your people and what they are saying. Unite in Nasa then we shall see what will happen. Whatever you will agree on is what I will go with,” the President said.

For the first time, Uhuru said once the Nasa leaders cement their union, they will then choose one of them for his endorsement.

Uhuru was responding to remarks by Kitui Governor Charity Ngilu, who had appealed to the President to implore Kalonzo to stick with his Nasa co-principals.

When he rose to speak, Uhuru asked the leaders present to allow him to delve into politics, saying there was a need for Nasa to stay intact if its leaders hope to succeed him next year.

“If as Ukambani you will work together and stay united the way the Mt Kenya region is doing, then I have no doubt you will be part of the next government,” Uhuru said.

Yesterday's delegation was led by Kalonzo and governors Ngilu and Alfred Mutua (Machakos).

An MP who attended the meeting told the Star on condition of anonymity that the President was forthright about his succession.

“The President in fact asked for time to talk about politics and said there is need for Nasa to stay united, as had been asked by Ngilu, to form the next government,” the MP said.

The President said the way the Mt Kenya region is pushing for their own unity, Ukambani leaders should spearhead such talks in their region ahead of 2022.

“He said he doesn't want to hang onto power even for a single more day when his term ends, but he would want to leave the country in safe hands,” said another lawmaker who attended the meeting.

Ruto hits back at Raila, Kalonzo over plot to unite and beat him

There have been claims by the President's critics, especially those allied to DP Ruto, that he is keen on extending his stay in power beyond his constitutional term limits.

This was the first time Uhuru was openly revealing how he will pick his successor even as bigwigs jostle to position themselves to take the reins from him.

The President's remarks appeared to reinforce statements by Kalonzo and his ODM counterpart Raila Odinga, who on Saturday hinted at reviving Nasa.

However, the two were swiftly dismissed by Musalia, raising questions of a falling-out even before the reunion formally takes place.

When asked about the President's remarks, Kitui Senator Enock Wambua said Uhuru talked about the unity of the country.

“The President said there is a need for leaders to unite to move the country forward. He said there is no single leader who can solely deliver development for his people,” Wambua said.

At the same time, the President yesterday insisted that he will not swear in the remaining six judges appointed by the Judicial Service Commission as they have integrity issues.

“I don't want to be summoned to courts to answer questions about the decisions I made while I was president; there should be a balance in law and the spirit of the Constitution,” he said.

A dispatch from State House said Uhuru urged leaders across the political divide to unite and work together for Kenya to achieve its goal of becoming a middle-income country by 2030.

The President emphasised that the whole essence of the Building Bridges Initiative was to bring the country together and consolidate national unity.

He cautioned against endless politics at the expense of development, saying political bickering and selfish pursuits by leaders were holding the country back.

“Rather than engaging in endless political fights, let's work together. If we do that, we will be able to become a truly middle-income country by 2030,” Uhuru said.

Kalonzo thanked President Kenyatta for the development projects implemented by the national government in the Ukambani region, citing the recent revival of the Kenya Meat Commission and several other infrastructure projects.

“You have really worked for your people and we appreciate that,” Kalonzo said.

Imagine what a truly different Kenya would look like if we gave it a chance
by JAMES MBAKA Deputy Political Editor
News
15 June 2021 - 06:45