The deficit of trust in Nasa is irredeemable, Mudavadi says

Mudavadi said the betrayal that rocked Nasa since 2017 is beyond repair.

• Mudavadi said when the leaders send conflicting messages to the people, they cause discouragement.

• The ANC leader was addressing the congregation on Sunday at Likoni PAG church during his two-day visit to the Coastal region. 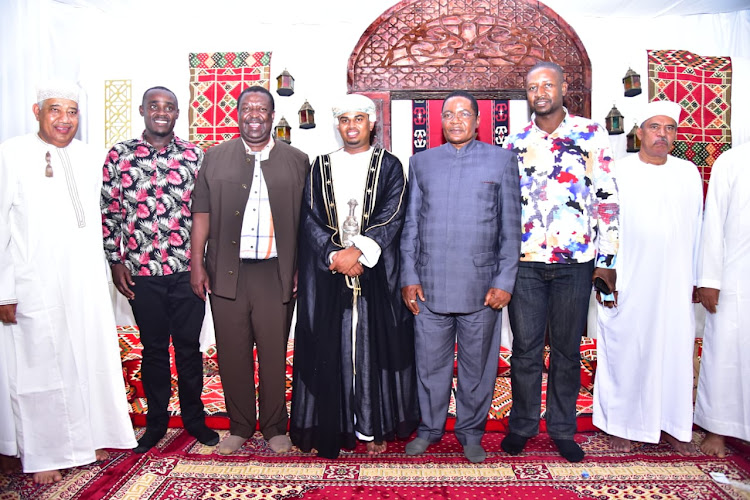 ANC leader Musalia Mudavadi and other leaders during his tour to the Coastal Region.
Image: ANC

Amani National Congress party leader Musalia Mudavadi has dismissed the possibility of the National Super Alliance (Nasa) co-principals reuniting ahead of the 2022 elections.

Mudavadi said that the betrayal that rocked the Nasa coalition since its formation in January 2017 is beyond repair, as leaders from the coalition’s constitutes are sending conflicting messages.

Very serious deficit of trust. In fact, maybe it is irredeemable.

The ANC leader was addressing the congregation on Sunday at Likoni PAG church during his two-day visit to the Coastal region.

Musalia started his tour to the region on Saturday accompanied by a number of leaders from the ANC party, including the former National Assembly Speaker Kenneth Marende.

Ruto hits back at Raila, Kalonzo over plot to unite and beat him

Marende described Mudavadi as the solution to the economical challenges that the country is facing.

His remarks come days after ODM leader Raila Odinga and Wiper leader Kalonzo Musyoka hinted at the possibility of reuniting.

Speaking on Friday during the burial of former Kibwezi MP Kalembe Ndile, Raila said he and Kalonzo have never broken ranks, adding that they would team up to defeat people they described as hyenas in sheep’s clothing.

The DP has also challenged Raila and Kalonzo over their plot to form a coalition ahead of 2022, saying that they should prioritise the agenda that they have for Kenyans before talking about forming coalitions.

“I heard them saying that they want to unite so that they can beat Ruto. I want to tell them, let them look for policies and development agenda to sell to Kenyans. Uniting to beat someone cannot help anyone,” DP Ruto said on Saturday.

Since the 2017 elections which the coalition lost to the ruling Jubilee Party, all the co-principles have differed over who should be backed as the flag bearer in 2022.

Earlier this year, ODM chairperson John Mbadi fired a salvo at the three principals – Musalia Mudavadi, Kalonzo Musyoka, and Moses Wetangula – describing them as "incoherent cowards" who depend on endorsements but cannot stand to be counted.

Mbadi told the trio to forget Raila’s endorsement ahead of the 2022 elections.