• Urban and industrial waste, unsustainable agricultural practices and transport are the main sources of soil pollution in Kenya.

• A recent analysis by Nema showed that soil pollution is the second highest reported environmental crime in Kenya. 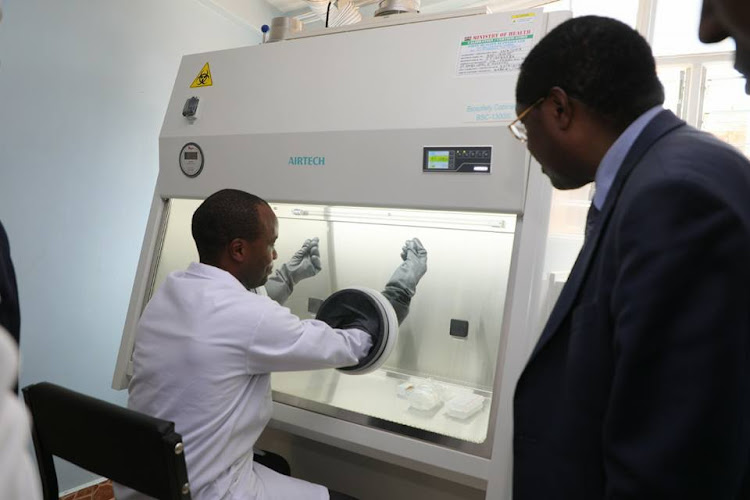 CANCER TREATMENT: An oncology pharmacist at the drugs mixing hood of the Embu Teaching and Referral Hospital, explains the process to Governor Martin Wambora when he launched the hospital's cancer centre in August.
Image: Filw

Kenya is among countries in Africa whose cancer burden is projected to double between 2008 and 2030.

A new study suggests this burden will be driven largely by soil pollution.

UNEP and the Food and Agriculture Organization say the plunder of nature is worsening and dangerous chemicals are increasingly finding their way into our food.

In a new report, the two note that urban and industrial waste, unsustainable agricultural practices and transport are the main sources of soil pollution in Kenya and other countries.

In other countries, fossil fuel extraction and processing is a major polluter.

“Soil pollution crosses all borders and compromises the food we eat, the water we drink and the air we breathe,” says the Global Assessment of Soil Pollution, a report launched by UNEP and FAO this week.

Cancer is the third leading cause of death after infectious and cardiovascular diseases in Kenya, according to the Ministry of Health.

The UNEP-FAO report looked at soil pollution across the world, and found it worsening everywhere.

“The joint assessment found that widespread environmental degradation caused by soil pollution, due to the growing demands of agri-food and industrial systems and an increasing global population, is getting worse,” the report says.

It was launched by Gigiri-based UNEP executive director Inger Andersen and FAO director general Qu Dongyu during the World Environment Day and to mark the UN Decade on Ecosystem Restoration (2021-2030).

Dongyu stressed the need for a coordinated response to address soil pollution and boost soil health.

"Soil protection is of the utmost importance to ensure the success of our future agri-food systems, ecosystem restoration and all lives on earth," he said.

A recent analysis by the National Environment Management Authority separately showed that soil pollution is the second highest reported environmental crime in Kenya.

In 2017, for example, the authority recorded 23 cases of soil pollution, compared to 97 and 11 for air and water contamination, respectively.

UNEP’s Andersen called for long-term monitoring to stop industrial pollution and sustainable practices in agriculture that supported the use of environmentally-friendly pesticides.

The global assessment found that waste production is rising everywhere.

The world currently produces two billion tonnes of waste annually and that is predicted to rise to 3.4 billion tonnes by 2050 due to population growth and urbanisation.

The assessment predicted soil and environmental pollution would continue to deteriorate unless there was a shift in production and consumption patterns and a stronger political commitment to support sustainable management and to fully respect nature.