•In the last few weeks, Ruto allies have been reaching out to Obado, the county boss who has embarked on revamping his former party- the People Democratic Party.

•Obado is a long-time friend of DP Ruto dating from the time of the governor’s tenure at the defunct Kenya Sugar Board when Ruto was the Minister for Agriculture. 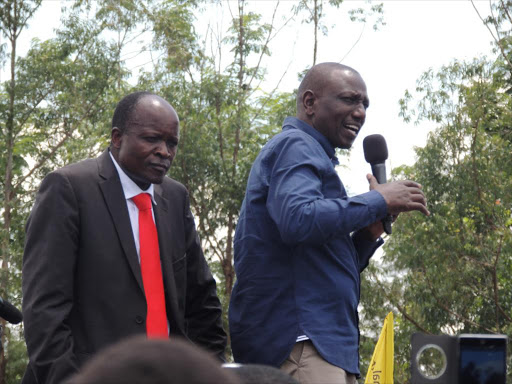 Ruto has launched a quiet charm offensive to woo Obado as he eyes to make inroads in Raila's Nyanza turf.

The DP received a rousing reception in Kisumu during the Madaraka Day fete, raising hopes in the DP's camp that he has a chance in the region.

The Star has established that in the last few weeks, Ruto allies have been reaching out to Obado who has embarked on revamping his former party the People Democratic Party to chip away Raila's support.

Ayacko on the other hand met with delegates from Suna East and Suna West constituencies on Wednesday.

“We know Obado is like a firstborn son who feels like he wants to build his own homestead. In Luo culture, he should know he will never take his father’s children when moving. Raila’s house is still intact,” Odhiambo declared

Ayacko who does not see eye-to-eye with Obado described him as a political busy body and likened his manoeuvres to a hyena who followed a man expecting his hand to fall off.

“We will have Raila come to Migori in August for a major rally which will push through the development agenda courtesy of his handshake with Uhuru Kenyatta,” Ayacko said.

“We are sure to be the governing party and majority in both national and Migori assembly in next polls.”

Obado won the governorship in 2013 on a PDP ticket after defecting from ODM but he bowed to pressure in the run-up to the 2017 election and rejoined Raila.

The DP camp is scheming to have PDA enter into a pre-election deal with Ruto's UDA.

He said Ruto had planned to visit Migori on April 28 which was pushed after public gatherings were stopped.

“We had a plan for a church funds drive in Isebania town which was to usher a meeting with elders from Kuria, before having major rallies in Migori town after meeting elders from Suba, Luo and Luhya communities,” Kitayama said.

Kuria West counterpart Mathias Robi said he does not mind working with Obado to ensure Ruto ascends to presidency.

“As Kuria community, we are firmly on course to vote in Ruto as our next presidency, we are in UDA and will work with any other parties for this end,” Robi said.

“Migori is a cosmopolitan county and we won’t be intimidated by Raila and his ODM party in this.”

Obado is a long-time friend of DP Ruto dating from the time of the governor’s tenure at the defunct Kenya Sugar Board when Ruto was the Minister for Agriculture.

He has hosted the DP several times against ODM's wishes.

“As your governor, I want you to permit me to walk alongside the Deputy President everywhere so that my people of Migori can get development. I am seeing a few people want me to be swallowed by crocodiles. I want you to pray for me so that I am not swallowed by the crocodile,” Obado said in November 2018.

Ruto enjoys some support from the Kuria minority tribe in Migori which forms 36 per cent of the population.

Both Kuria East MP Marwa Kitayama and his Kuria West counterpart Mathias Robi are elected on the Jubilee ticket.