Ouko urges Koome to use diplomacy in stalemate over 6 judges

• "I'm proud to be handing over the court to my successor whom I've known for 30 years, a meticulous and thoroughly organised judge" - Ouko. 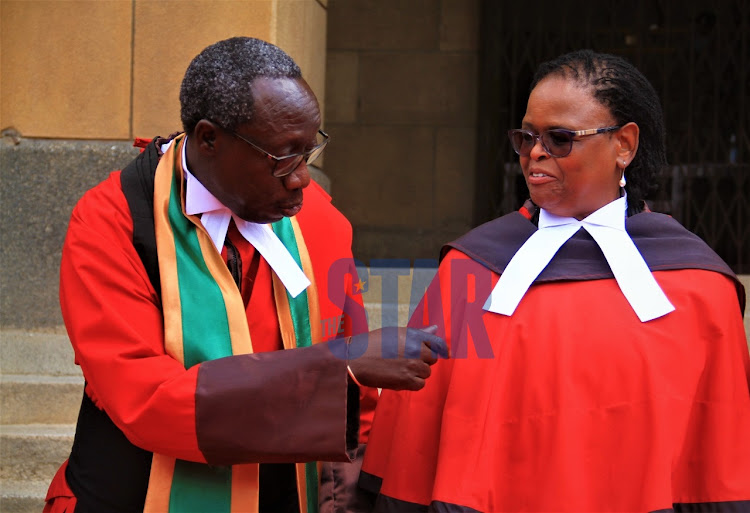 Supreme Court judge William Ouko has urged Chief Justice Martha Koome to use diplomatic skills to bring to an end the stalemate on appointment of six judges.

Ouko on Friday said without the appointment, the Court of Appeal will experience delays in determination of appeals.

He spoke during the swearing in of Daniel Musinga as the president of the Court of Appeal.

Ouko, who previously served as the president of the Appellate court, said there were 6,000 appeals when he joined the court in 2012.

This is against the projection as a court.

President Uhuru Kenyatta declined to gazette the names of six judges - among them four who were to serve in the Appellate court - citing integrity issues.

Aggrey Muchelule, George Odunga, Weldon Korir and Joel Ngugi were to serve in the Appellate court but their names were not gazetted.

Uhuru gazetted the names of 34 judges.

Uhuru rejects six names for Court of Appeal, which is overstretched with Koome, Ouko new roles.
News
2 weeks ago

Ouko said, "The prevailing state of affairs will affect administration of justice. delay caused by backlog is a serious problem. It Impedes access to justice. It leads to injustice, violates individual right to a fair and speedy trial."

"It keeps many in jail for years on end without trial."

Ouko, however, said he was proud because of the great strides the court has made despite the many challenges.

"I urge my successor to steer the court to greater heights."

"I'm proud to be handing over the court to my successor whom I've known for 30 years, a meticulous and thoroughly organised judge."