•According to the report, the county government  irregularly awarded tender worth Sh45 million for the supply of Covid 19 items.

•The tenders were awarded to Nyamayo Investment and Commodoare International Limited through restricted tendering. 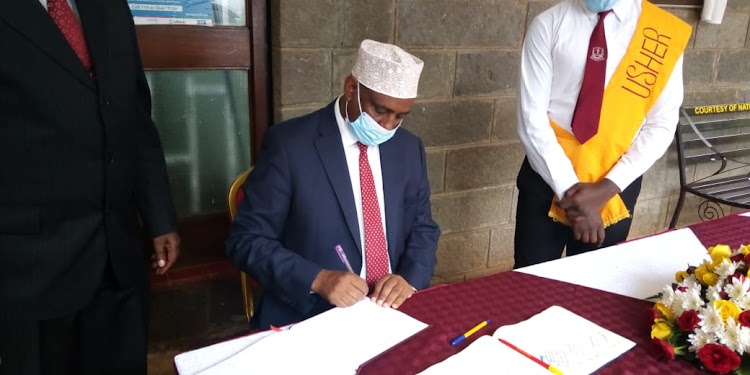 Marsabit Governor Mohamud Ali was on Thursday tasked to explain why his administration spent Sh30.42 million sent to the county to fight Covid-19 without an approved budget.

The county also splashed the cash without putting in place training plans to guide the use of the funds released by the National Treasury for frontline health workers.

Ali appeared before the Senate health committee to explain several queries flagged by Auditor General Nancy Gathungu in her special report on the use of the Covid billions.

The committee chaired by Trans Nzoia Senator Michael Mbito is investigating the expenditures of the Sh7.7 billion channelled to the devolved units after the audit revealed several flaws.

According to the report, Marsabit lacked both approved budget and training plans to guide the expenditure of the Sh30.42 million.

“There was no evidence of the approved budget for Government of Kenya health workers allowances and training plan for the conditional grants received from the national government,” the report read in part.

In his response, the governor said the county had training plans but only lacked approval at the time of the audit.

“There was a delay in obtaining county assembly approval however the approval of the assembly was done in March. Attached find an extract of approved Supplementary Budget for 2020 – 21,” he said.

He further explained that with the release of the cash too close to the end of the last financial year coupled with the need to avert looming healthcare workers strike, there was an urgent need to pay the allowances.

However, the auditors poked holes in the documents, saying the amount captured in the governor’s response was much less than the figure queried in the report.

Ali said the county had revised his responses and added annexes to the initial responses submitted to the auditors.

The auditors however maintained they had received the improved version of the responses.

The standoff triggered a barrage of concerns from members who sought directions from the chairman on how the meeting would proceed if the governor and the auditors have conflicting documents.

“How do we proceed if the auditor and the governor are reading from different scripts?” Narok senator Ledama Olekina asked.

“We need to give the auditor some time to go through the new responses and then we will rely on what they say to file our report without inviting the governor again,” Omanga suggested.

Temporary chairman Fred Outa (Kisumu) ordered the governor to submit the document within seven days before adjourning the meeting prematurely.

According to the report, the county government irregularly awarded a tender worth Sh45 million for the supply of Covid-19 items.

The tenders were awarded to Nyamayo Investment and Commodoare International Limited through restricted tendering.

Restricted tendering limits the request for tenders to a select number of suppliers, contractors or service providers.

Nyamayo Investment was awarded tenders worth Sh20.20 million for the supply of Covid-19 related mitigation items.

In the written response submitted to the committee, Ali said the county used prequalified suppliers in restricted tendering.

“Since the source of the items had been known to be from selected suppliers through a market survey, this was the best economical method in the case of Covid 19 emergency,” reads the documents.

The report shows the county could have procured the items at higher prices as the officers failed to conduct market surveys to ascertain prices.

Gathungu fingered the county accounting and procurement officers for procuring items worth Sh57.90 million without conducting a market survey, a scenario that could have exposed them to higher prices than market rates.

The special audit reviewed quotations raised to the county government of Marsabit and noted that the accounting officer placed tenders without evidence of the head of procurement conducting a market survey for items worth Sh57.09 million.