Yatani drives in Volkswagen Passat to read budget in Parliament

• The CS read the second budget estimates in the middle of Covid-19 pandemic that has ravaged the economy and taken a heavy toll on Kenyans.

• At exactly 2.07pm, Yatani stepped out of his Treasury Building office along Harambee Avenue to a huge crowd of onlookers. 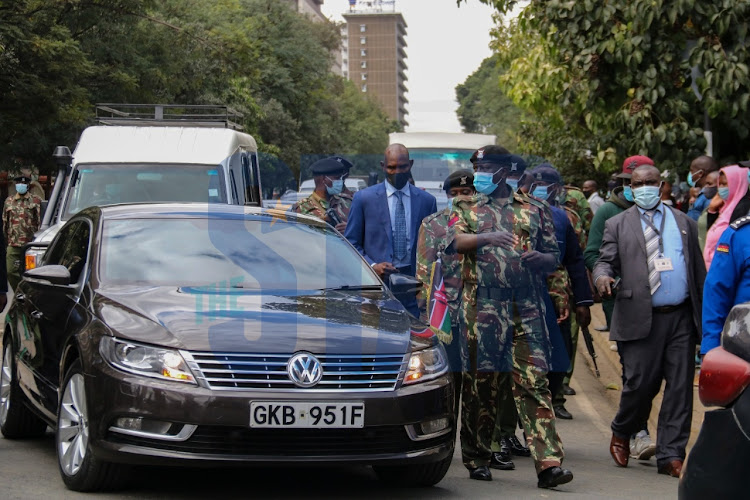 Treasury CS Ukur Yatani could have walked the short distance from the Treasury on Harambee Avenue to Parliament buildings.

Google Maps estimates it is 750 metres away and takes nine minutes on foot. Could be faster if you walked at a steady stride.

These Covid-19 times are difficult and Yatani walking on foot would have signaled to Kenyans to brace themselves for a tighter budget.

The Cabinet Secretary made a less drastic choice in abandoning his fuel guzzler Mercedes-Benz for a Volkswagen Passat.

The VW Passat was introduced by then-Finance Minister and now President Uhuru Kenyatta, for top government officials as an austerity measure. The choice made sense.

Yatani stepped out of his office at 2.07pm to a huge crowd of onlookers, perhaps hoping for some relief out of his briefcase. Perhaps a glance at money bags?

Dressed in a pinstripe dark blue suit, a white shirt, and a red tie, Yatani, who was carrying the briefcase containing the budget estimates, posed for photos before boarding GKB 951F Volkswagen Passat.

The CS’s convoy snaked through Harambee Avenue at a snail’s pace under tight security from GSU and National Police Service officers.

Harambee Avenue, Taifa Road, Parliament Road, and City Hall Way were all closed to ease the movement of dignitaries. 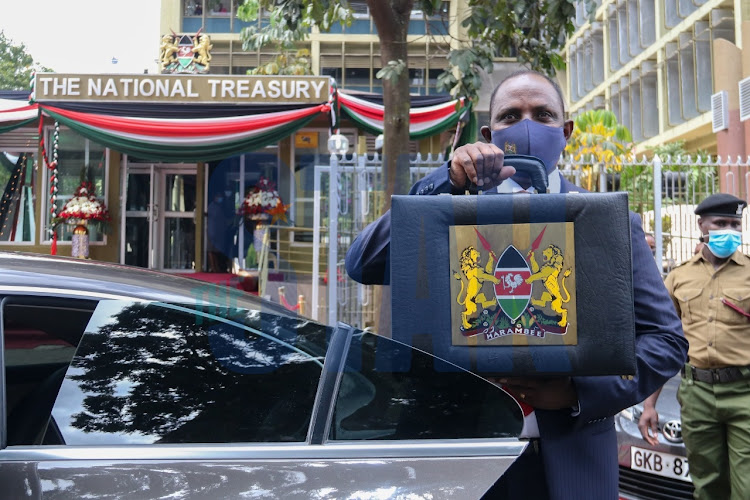 Treasury CS Ukur Yatani posing for a photo outside the National Treasury offices before proceeding to the Parliament for budget reading on June 10, 2021.
Image: WILFRED NYANGARESI

The CS, holding his briefcase, posed for several photos before proceeding to the chambers for the actual business.

In the chambers, the House was barely a third full in observance of the Ministry of Health protocols to keep coronavirus at bay.

National Assembly Speaker Justin Muturi made his way into the chamber at 2.31pm and presided over preliminary business.

The speaker warmed up the moment when he asked nominated MP Godfrey Osotsi to apologise to the House Finance committee for claiming the team was sitting on his statement.

Osotsi had said that the committee chaired by Homa Bay Woman Representative Gladys Wanga had sat on a statement he had requested in April on revenue collection performance by the Kenya Revenue Authority.

From the House, the CS walked straight to the media tent, where he addressed journalists before boarding his car back to the Treasury Buildings.