• Some Sh335 million will be for equipping the National Forensic Laboratory 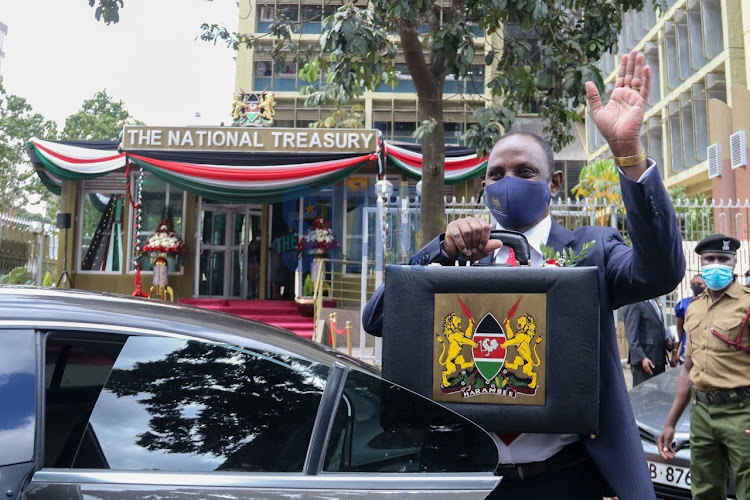 Treasury CS Ukur Yatani ahead of the budget reading in Parliament on June 10, 2021
Image: WILFRED NYANGARESI

The government has allocated Sh294 billion to security agencies in the 2021-22 budget.

This is an increase of almost Sh126 billion from last year's allocation. In the 2020-21 budget, the agencies were allocated Sh168 billion.

Treasury CS Ukur Yatani on Thursday said the amount will cater to national defence, the National Police Service and the National Intelligence Service.

He said the money will facilitate leasing of police vehicles, National Communication Security Surveillance Systems, police modernisation and the establishment of a modern forensic lab.

In his Sh3 trillion budget statement on Thursday, the CS said the government has set aside Sh119 billion for defence, Sh42 billion for NIS and Sh10.7 billion for leasing of police vehicles.

Some Sh1 billion will be used for modernisation programmes and Sh1.5 billion for surveillance systems.

A total of Sh4.8 billion will cater for medical cover of officers and Sh3.2 billion for group personal insurance.

Some Sh1 billion will cater to integrated management systems, while Sh335 million will go towards equipping the National Forensic Laboratory.

This is an increase in allocations for all agencies ahead of the 2022 General Election and planned referendum.

Military and police are undertaking major modernisation programmes that require these allocations.

As a pilot programme, Yatani said, the Nairobi Metropolitan Services has been successful in rolling back the frontiers of urban indignity. In the budget, the NMS has been allocated Sh27.2 billion.

Yatani also said he has increased funding for agencies tasked with fighting corruption and crime.

The national government will get the lion’s share of the Sh3 trillion budget at Sh1.946 trillion ahead of counties at Sh370 billion. Parliament and Judiciary will get Sh37.9 billion and Sh17.8 billion respectively.

Yatani has adjusted upwards spending in key areas seen to be drivers and enablers of the agenda in the budget dubbed 'Building back better days: Strategy for resilient and sustainable economic recovery'.