Ngala is trained in mechanical engineering and ventured into business.

• The Roots Party of Kenya installed Ronald Gideon Kahidi Ngala as the face of the party in the Coast region.

• The young Ngala is the son of long serving politician and minister Noah Katana Ngala. 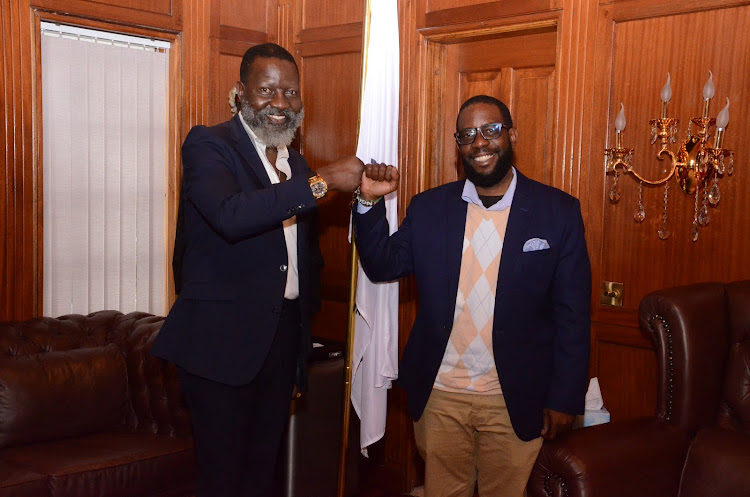 Former Coast political supremo Katana Ngala's grandson has been installed as chairman of a political party in Kilifi county in readiness for the 2022 polls.

The Roots Party of Kenya on Wednesday installed Ronald Gideon Kahidi Ngala as the face of the party in the Coast region as the outfit gears up for the General Election next year.

The young Ngala is the son of long serving politician and minister Noah Katana Ngala who currently serves as the chairman of the Kenya National Libraries.

Lawyer George Wajakoya, the leader of the party, said the outfit was making serious preparations to capture power during the next year's elections and that it has made considerable investment in its grassroots mobilisation.

"Nobody seems to take us seriously but as a party, we are seriously doing silent work at the grassroots in all parts of the country in readiness for the polls next year," Wajakoya said at his Karen office, alongside Katana.

The lawyer said his party was targeting the "low cadre and the mostly ignored members of the society" to list as members and that it had covered considerable ground.

Young Ngala said his political ideology was majimboism, inherited from his grandfather, who championed devolution. He said his new position will give him a platform to push for broader and meaningful devolution of power and resources.

The Canada educated mechanical engineer turned  businessman is married to a Kenyan British and is a father of two sons.

He said leading the Roots Party from the Coast region would give him a better platform to champion sending more resources and power to the grassroots "as part of honouring the vision of my grandfather."

"Majimboism is the solution to fair and equitable sharing of resources in this country. This is what my grandfather pushed and this new position gives me the opportunity to talk about it more," he said.

Part of his vision, Ngala said, is to reach out to the youth in the region and develop empowerment initiatives to help alleviate poverty and desperation.

"Joblessness has caused desperation and hopelessness in the region. This platform gives me the opportunity to reach out to them and give them hope."