CS Magoha says some learning institutions are operating without due process.

• Schools put on notice include those grappling with inadequate infrastructures and land and those without enough learners to meet the registration standards.

• Institutions with inadequate land but border others with playgrounds will, however, survive the crackdown 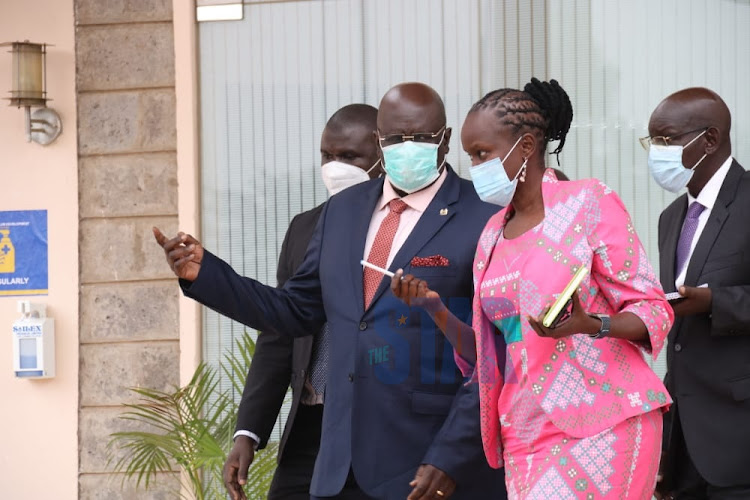 Education CS George Magoha on Wednesday hinted at a possible crackdown on schools that do not meet registration standards.

The CS said some schools are operating without due process, with some having no licences.

"It is now time to right-size all the politically correct institutions that do not give our children the education they require," Magoha directed the quality assurance department.

"One of the things considered when registering schools is whether there is physical space for children to exercise... if there is none, don't register it, no matter who says otherwise."

Magoha was speaking at KICD headquarters during the launch of physical education and sports policy for basic education.

Schools put on notice include those grappling with inadequate infrastructures and land and those without enough learners to meet the registration standards.

"It is now time to be bold enough as we move to the election period, and take back our authority to register schools through a larger committee at Jogoo House," Magoha said.

Institutions with inadequate land but border others with playfields will, however, survive the crackdown, Magoha said.

If actualised, the move could spell doom to more than 3,000 schools that are run under the Alternative Providers of Basic Education and Training and largely do not meet registration criteria.

In 2019, thousands of learners from such schools were affected after a directive by the Education ministry to close down all schools that had not complied with safety guidelines following the collapse of Precious Talent Academy in Dagoretti, Nairobi. The crackdown targeted all unregistered schools.

Those with dilapidated structures and those that have exceeded their enrolment capacities without approval will be reassessed and risk having their operating licences withdrawn.

Schools that have changed their status and those that run without teachers registered by the Teachers Service Commission will also be shut down.

At the same time, the CS warned against the encroachment on school land, noting that the government has plans to repossess all grabbed parcels.

Of 29,404 public schools, more than 24,400 have no title deeds or lease certificates. They have no documentation of ownership and are, therefore, vulnerable to encroachment and land-grab.

Already, 4,100 schools have reported cases of land contestation, encroachment and grabbing to the National Land Commission.

The attempted takeover of Lang’ata Primary School land in January 2015 and the subsequent presidential directive to the Lands ministry to title all public school parcels further highlighted the threat public schools without legal protection face from such grabbers.

Since then, only 800 schools have had their titles processed but have not received lease certificates. This represents roughly 2.7 per cent of all schools in the country. In March 2018, the government began an investigation into the grabbing of school land but has yet to release its findings.

"Our audit exercise is not to target individuals but is aiming at the ultimate protection of land belonging to education institutions. However, if there are individuals taking school land, they will be identified and questioned accordingly," PS Belio Kipsang, who headed the Basic Education department said in 2018.

The fate of these institutions now lies with the Judiciary and the NLC as they seek to repossess their plots.