The case will be mentioned on June 21 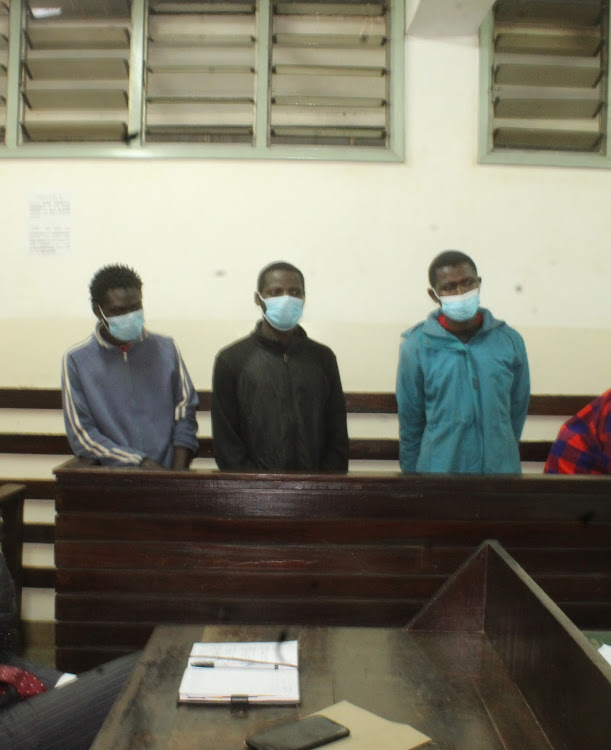 Three men were on Tuesday charged at a Kibera court with attacking and robbing motorists who stop on the road with mechanical problems.

They are also accused of attacking passengers who stop on the road when PSVs encounter mechanical problems.

According to the charge sheet, the three, armed with firearm and stones along the Southern bypass within Nairobi county, attacked  Yvonne Achieng Onyango and stole her iPhone 12 pro Max, Samsung A51,  Techno pop phone and a bag all valued at Sh200,000.

They committed the offence on May 14, the charge sheet reads.

The police report says Achieng was in the company of her two children when she got a puncture and stopped at Mobile weighbridge to try and see what the problem was.

Two men appeared on both windows, ordered her to open them but she refused, prompting them to smash the windows using a stone and then stole the items before disappearing into the forest.

The police say the next day, the three suspects again attacked Mary Wanjira Muiruri who had stopped the car at the same spot to move her three-year-old baby to the back seat to sleep.

They said Muiruri was in the company of a police driver when the five men armed with knives and a silver firearm approached their car and robbed her mobile phones, baby diapers, wallets, personal documents and certificate for an appointment with police all valued at Sh45,000.

The accused again appeared after four days and spotted a lorry parked at the same place whose driver had stopped to relieve himself. They ordered a lady in the lorry to open the door and when she refused, they smashed the window with a stone.

They stole ID cards, invoices and Sh6,700 before disappearing into the forest near the bypass leading to Kibera slums. The two reported to Lang'ata police station and their vehicle was dusted for fingerprints. The car was processed as an exhibit.

Tom Edwins Onyango, another victim, reported to the police how he was attacked by four men at the same spot.

He reported that he stopped the car to have his son relieve himself when the men appeared armed with a gun that resembled an AK 47 rifle.

He said the gang beat him up, threw him to the ground as others ransacked his car. He reported that they stole his mobile phone too.

On Tuesday, court prosecutor Allan Mogere did not object to their release on bond after they pleaded not guilty.

The case will be mentioned on June 21.