•Raila who had gone to his office for the first time in months shared pictures with the CoG chairman Martin Wambora and vice-chair James Ongwae. 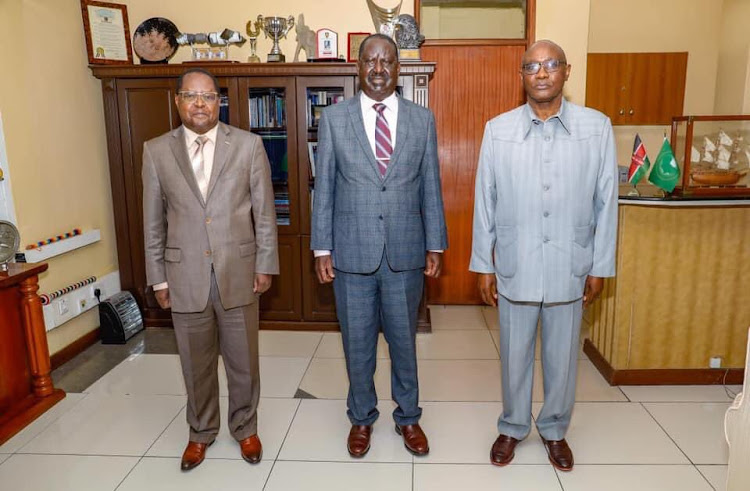 Former Prime Minister, Raila Odinga on Tuesday met with the Council of Governor's leadership, at his Capitol Hill office.

Raila who had gone to his office for the first time in months shared pictures with the CoG chairman Martin Wambora and vice-chair James Ongwae.

Mogeni is leaving the council's secretariat as CEO following her appointment by President Uhuru Kenyatta, as Judge of the Environment and Land court.

She was among the 34 whose names the president gazetted for appointment from a list of 41 judges.

Kisii Governor James Ongwae said that the devolved units will always be proud of her achievements at the CoG secretariat as he congratulated her for the appointment.

"Congratulations @CEOCOG Jacqueline for a well deserved appointment as a judge. You have done Kenyans and @KenyaGovernors proud," Ongwae said.

The 34 Judges took the oath of office on Friday, June 4, 2021, in an event presided over by President Uhuru Kenyatta at State House Nairobi.

They will serve in the Court of Appeal, Environment and Lands Court, and the Employment and Labour Relations Court.

Uhuru rejected names of the six judges saying that integrity issues had been detailed by the National Intelligence Service and other security agencies against them.

This comes amid uproar over the rejected six judges by the president.
News
1 week ago

Why appointing the 34 Judges was the right thing - Gladys Shollei

The Court of Appeal has not been hearing any cases except for stay orders.
News
1 week ago
by BRIAN ORUTA Digital Journalist
News
08 June 2021 - 15:32