Says it is not a favour, and such talk is retrogressive, divisive, dishonest and against the spirit of building one prosperous nation.

• He said it was unfair for some politicians to portray the Madaraka Day event as some kind of favour to Kisumu county and the entire Nyanza region.

• DP Ruto's Rift Valley backyard has cried foul that President Uhuru Kenyatta is starving the region of development projects because of its political allegiance. 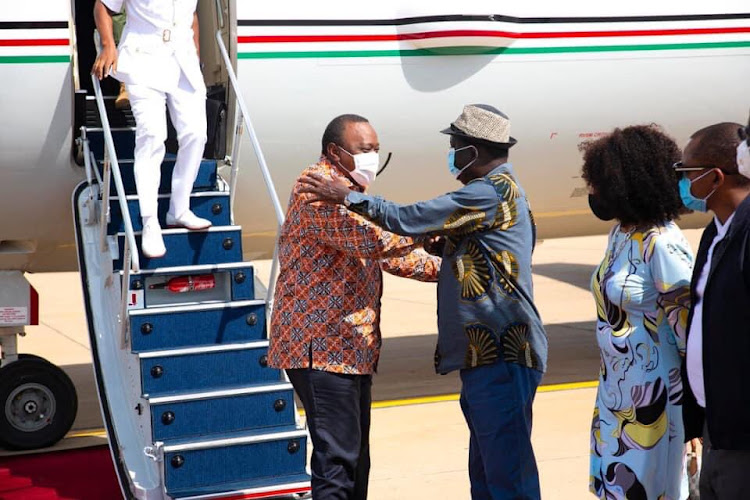 He said it was unfair for some politicians to portray the Madaraka Day event as a favour to Kisumu county and Nyanza region.

“Odinga finds such talk retrogressive, divisive, dishonest and against the spirit of building one prosperous nation out of its diverse nationalities and regions,” Raila said in a statement by his spokesman Denis Onyango.

The former Prime Minister said the era of setting up communities against one another was long gone, and its proponents live in a country that no longer exists.

“Odinga appeals to leaders to enable and allow Kenyans to imagine an ideal future and hold big dreams for their country instead of standing in their way,” Raila said.

This comes as Deputy President William Ruto's Rift Valley backyard cried foul that President Uhuru Kenyatta is starving the region of development projects because of its political allegiance.

Appearing to have been stung by the projects unveiled by Uhuru, the politicians claimed the region is being persecuted because of its loyalty to the DP.

This was the first time that Rift Valley, Ruto's political 'bedroom', was coming out to protest against what Tangatanga politicians from the region termed 'development exclusion.'

During a strategy meeting attended by five Rift Valley governors and about 40 MPs, the leaders said they believe the government has given Rift Valley a blind eye on development matters.

“The Jubilee government has done a lot, but there are key projects that are at the heart of the livelihoods of the people in Rift Valley that have been ignored,”  Turkana Governor Josphat Nanok said.

The elected leaders said they have formed a 14-member technical team to craft a development agenda that would form the basis for their 2022 negotiations.

The panel will in the next two weeks come up with a draft copy of the economic and political issues that will form the talks.

They singled out Kimwarer and Arror dams as some of the key projects that were meant to turn around the region's economic fortunes but have been 'frustrated'.

"We don't want to assume that Ruto's coming from Rift Valley and being in government, he understands the needs of the region," Nanok said.

The governor said like other regions that are pushing for broad-based negotiations with Ruto. They will be seeking a date with the DP, he said.

"Ruto must tell us how he is going to solve the issues we shall be raising. If he offers no convincing plan, then he better allow us to look elsewhere," Nanok said.

As Ruto allies spoke, Raila said leaders should stand up for Kenya and encourage their supporters to fully explore and showcase their potential to contribute to the growth of the nation instead of demonising other regions.

“The current efforts to demonise the showcasing of such potential will only serve to undermine rather than fire the imagination of other counties and eventually that of the entire nation,” Raila said.

Handshake critics have claimed that the goodies unveiled by the President during his visit to the region were meant to hoodwink the region to support his and Raila's political plans.

But Raila has dismissed claims that Nyanza's development projects was political tokenism. saying the showcase was in line with the spirit of rotational national events.

“None of the projects launched or mentioned during the Madaraka period are owned by or meant to serve Kisumu county alone. They are meant to, and will serve the entire Kenya nation,” Raila said.

Raila gave an example of the revamped Nakuru-Kisumu meter gauge railway line, which he said will cater to passengers and goods from diverse parts of the country, the region and the world.

He said the railway line will not be terminating in Kisumu but will extend from the port city in Kisumu to Butere in Kakamega county.

“It is not the only revamped rail line, either. Another revamped metre gauge line will run from Nakuru to Eldoret – both in the Rift Valley. This will be supplemented by a line running from Bungoma to Malaba, cutting across Bungoma and Busia counties,” Raila added.

He said the rehabilitated Port of Kisumu is not meant for Nyanza or Kisumu county.

Raila said it is meant to serve Eastern Africa, the Great Lakes Region, the Horn of Africa through the River Nile and the international community through linkages with the ports of Bukoba, Jinja, Mwanza, Entebbe, Mombasa and others in the Atlantic Ocean.

“The main beneficiary of this connectivity via the Port of Kisumu will not be Nyanza or any single county but the Republic of Kenya,” he said.

Raila said the revival of projects in Kisumu, just like other counties that have played host to national day celebrations, was nothing new.

“They are in line with what was witnessed in Kakamega and Kisii counties during Mashujaa Day,” he said.

In Kakamega, for instance, the country witnessed a partnership between the national and Kakamega county governments to complete an international stadium and a teaching and referral hospital.

There were no complaints from other leaders when these regions showcased their contributions, Raila said.